TCU Storms Back from 2-0 Deficit to Top West Virginia 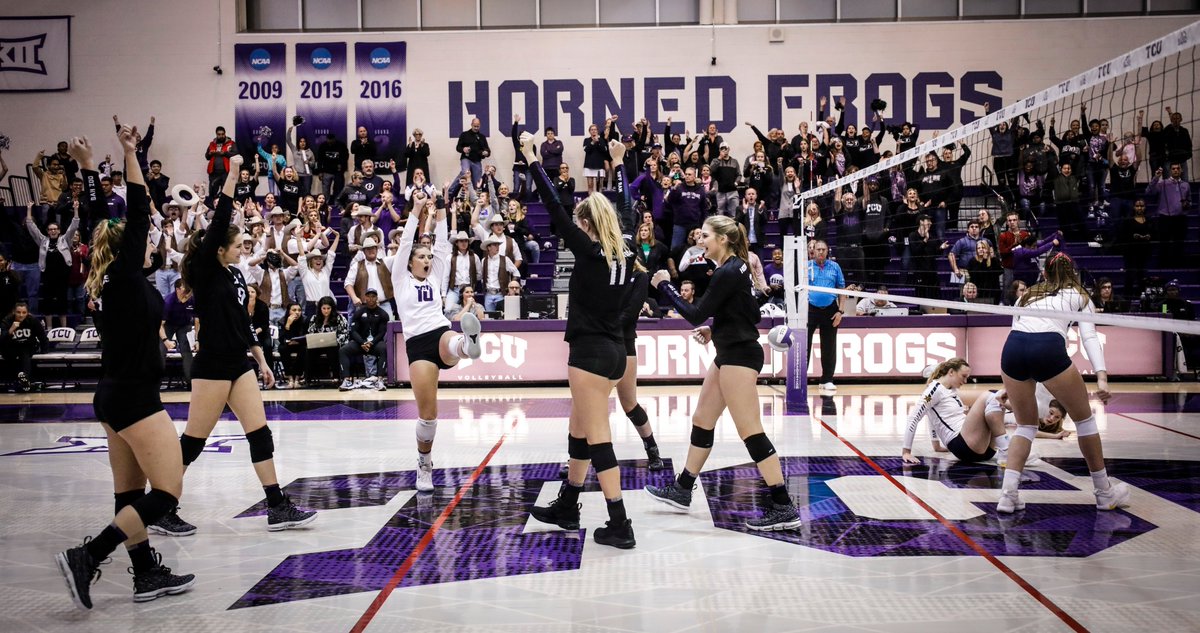 FORT WORTH, Texas – Trailing 2-0 in the match, the TCU volleyball team staged a comeback and were able to take the win in three straight sets to get the 3-2 (18-25, 25-27, 25-21, 25-23, 15-7) victory over West Virginia in front of a sold-out crowd on Thursday night to wrap-up the first half of Big 12 Conference play at The Rickel inside the University Recreation Center.

The Horned Frogs (12-7, 4-4 Big 12) had to regroup after falling behind in the match and used senior leadership from Anna Walsh and Lexi MacLean to ultimately get the victory over the Mountaineers (9-11, 1-6 Big 12). TCU never gave up and used strong serving and blocking to jump out to early leads in the third and fourth set. WVU would attempt to close the gaps, but the Frogs continued to control the sets in order to force the decisive fifth set. TCU was nearly unstoppable in the final frame with nine kills and only one error for a .421 hitting clip as they completed the comeback.

Walsh paced the offense with a season-high 24 kills and was just shy of a double-double with a team-best nine blocks while MacLean led the defense with 24 digs. Allye Beth Deaton scored her first double-double of the season with 15 kills and 18 digs while Katie Clark finished with 13 kills. Tori Dilfer recorded her own double-double of 55 assists and 13 digs with Berklie Baker and Dani Dennison chipping in on defense with 21 and 11 digs, respectively.

Stats of the Match
2 – TCU came back from being down 2-0 in a match to win for only the second time under the helm of Jill Kramer. The Frogs were also down 2-0 to Duke on Sept. 2, 2016 and came back to win the match in five sets.

Quotes from the Match

“I like the outcome of this game but I really wasn’t pleased with the way we started and I don’t think anyone on the team was so we need to get better at that next match. We stuck with it and we got back into a rhythm. We were pretty great from the service line and I though Anna (Walsh) had a really good match tonight. We had a couple people come in and do a really good job for us. It was definitely a team effort.

“We did a good job on floor defense and Lexi (MacLean) was a big part of that. I thought we were super scrappy and played a very good and also a young West Virginia team. Reed (Sunahara) is doing a great job with them and they are battling every single match they play. They are good team and going to keep working through it in this Big 12 season and keep getting better for sure. I was proud of our team for gutting it out with them.”

Up Next
TCU will start the second half of Big 12 Conference play by welcoming Baylor on Wednesday, Oct. 24 to Fort Worth for a 7 p.m., showdown at The Rickel inside the University Recreation Center.