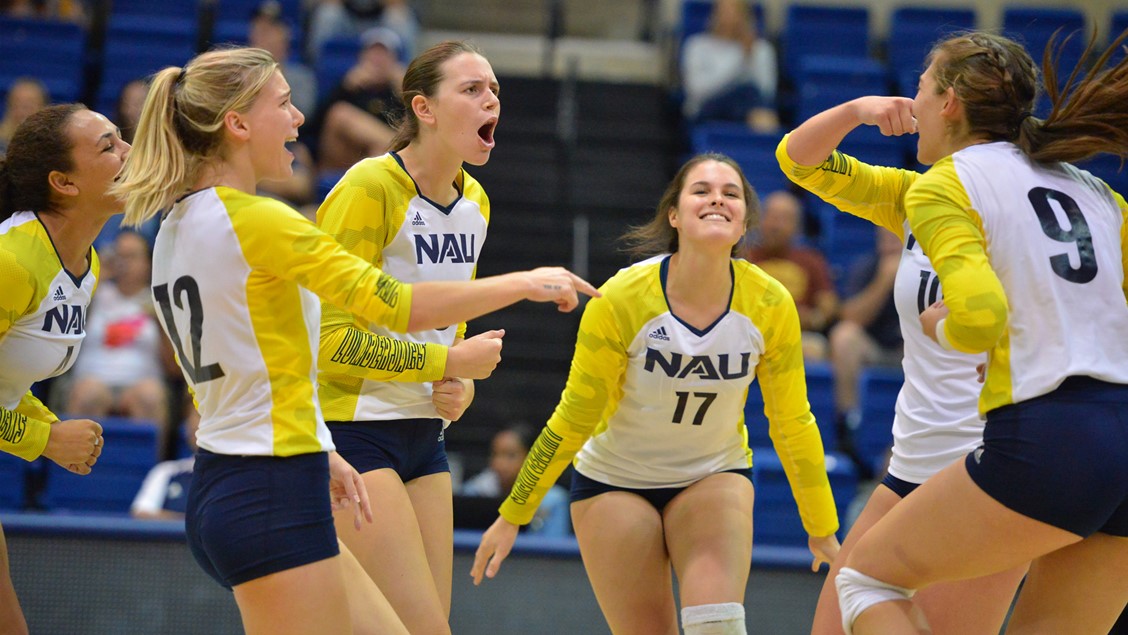 After two weeks on the road, the Northern Arizona volleyball team opens up its 12-match home schedule this weekend with the 2018 Lumberjack Classic. Saturday's match with No. 7 Florida highlights the weekend slate.  Current Photo via Northern Arizona Athletics

FLAGSTAFF, Ariz. – After two weeks on the road, the Northern Arizona volleyball team opens up its 12-match home schedule this weekend with the 2018 Lumberjack Classic. The Lumberjacks will begin tournament play with their home opener in the Rolle Activity Center on Friday versus Southern Illinois at 11:30 a.m. The marquee matchup of the weekend will take place later that night when the Lumberjacks host No. 8 Florida at 7 p.m. NAU concludes the Lumberjack Classic on Saturday at 12 p.m. versus CSUN.

“We have three really good opportunities for us to prove to ourselves that our style is right,” said head coach Ken Murphy. “This weekend we have three different teams who play three different styles, and it will be three opportunities to prove to ourselves that if we play the way we are capable of playing, we can be successful and get the results we want.”

NAU’s Friday night match versus Florida – last year’s NCAA runner-up – will be its first against a nationally-ranked opponent since hosting No. 15 Eastern Washington in 2002, and just the fourth all-time. The eighth-ranked Gators will be the highest ranked NAU opponent in program history. For fans attending the Florida match, the first 1,000 fans – students included – will receive an exclusive NAU Lumberjack t-shirt.

Tickets for the Lumberjack Classic are available by the day and is $5 for the general public. A $5 ticket will be good for all four matches on Friday, and similarly for both Saturday matches.

“We feel like we have such a great home court advantage here,” Murphy said. “Tt has been a long time since we’ve been able to play in front of our fans and show them all the hard work we’ve been putting in. I think we’ve improved so much over the last seven or eight months and we’re excited to show the community how we’ve grown.”

The Lumberjacks improved to 5-2 through the first two weeks of the season after taking two of three matches at the IUPUI Hampton Inn Invitational last weekend. NAU defeated SIUE to begin its stay in Indianapolis, Ind. before dropping a five-setter to Western Michigan. NAU rebounded to sweep IUPUI in the finale to place second in the tournament.

Junior Abby Akin and sophomore Heaven Harris earned their second straight All-Tournament nods in as many weekends. Akin currently ranks fifth in the conference in both hitting percentage (.329) and ace average (0.41) in addition to ranking seventh in block average (1.14). Harris finds herself ranked ninth in the league in hitting percentage (.282) and kill average (3.17).

The Lumberjacks are being led offensively by redshirt senior Kaylie Jorgenson, who ranks fourth in the Big Sky with 3.45 kills per set. Defensively, senior Jordan Anderson needs just 28 digs to become the 14th player in program history to register 1,000 career digs. Her 5.17 digs per set are third-most in the conference.

All live stats links are available at the tournament central page. Only Friday night’s match versus Florida will be streamed on Pluto TV Channel 239 and NAU-TV locally. Pluto TV is available through a web browser as well as the free mobile app.