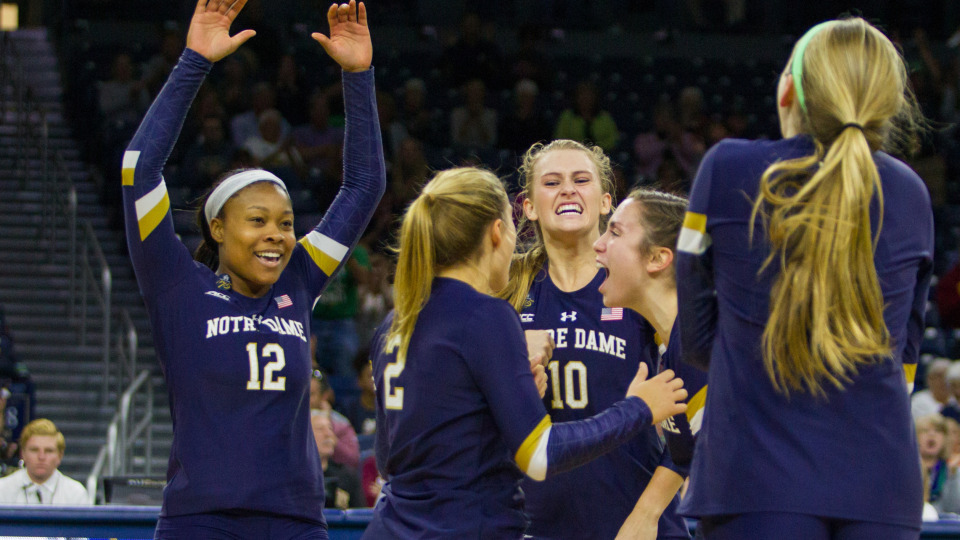 Notre Dame downed its third top 25 foe of the season, hitting at a better than .350 clip in each of the final two stanzas to rally for a five-set win over No. 24 Florida State on Sunday. Current Photo via Notre Dame Athletics

SOUTH BEND, Ind. – Notre Dame downed its third top 25 foe of the season, hitting at a better than .350 clip in each of the final two stanzas to rally for a five-set win over No. 24 Florida State on Sunday.

Notre Dame jumped out to a 4-1 lead in the decisive fifth set as Yeadon notched four kills. FSU caught up and then some with a 5-1 run of its own to take a 6-5 lead. Two Irish errors and kills by Kubura, Burkert and Ambrose aided the rally. Down 7-6, Notre Dame scored four straight, all on all on Woodard putaways, to vault ahead 10-7. A pair of Yeadon kills put the Irish at match-point at 14-10. A kill and a block by Kubura kept the Seminoles in the match. Nunge closed out the upset with her 10th kill of the night.

Notre Dame scored five straight, three on Morningstar blocks, to give the Irish a 10-5 lead in Set 1. Back-to-back aces by DeJarld upped the Notre Dame lead to seven at 14-7. The Seminoles were within three at 18-15 and 20-17. Another DeJarld ace put the Irish ahead by five at 22-17, but FSU cut it to two at 23-21 with help from kills by KNuth and Natasha Calkins. Notre Dame wrapped up the set on a Yeadon kill and a stuff by Fry and Holt.

FSU turned a 5-all tie into a 12-8 lead in Set 2, care of four Kubura kills. Two kills each by Ambrose and Burkert lifted FSU to an 18-12 advantage. Later down 22-16, the Irish mounted a comeback, slicing the deficit to one at 23-22. Five Seminole errors and a stuff by Yeadon and Morningstar aided the rally. An Ambrose kill made it set point at 24-22. Nunge stopped that effort with a kill, but Knuth buried the final kill at 25-23.

Kubura and Knuth combined for a pair of blocks in an early 5-1 run in Set 3. The Seminoles boosted the lead to seven at 14-7  with kills by six different players. Morningstar put up three blocks, including a solo effort, to help pull the Irish with three at 14-11, but FSU got three kills by Burkert to make it 20-13. Notre Dame was within four at 22-18, but the Seminoles closed out the set with a 3-1 run, including two Ambrose putaways.

Notre Dame ran out to a 12-5 lead in Set 4 with three kills from Woodard and two by Yeadon and two blocks. The teams traded points over the next 10 points, leading to a 17-10 score. A 4-0 Irish run, including kills by Nunge and Woodard and a Yeadon ace, made it 21-10. Two Woodard kills anda  Johnson ace capped the 25-12 win, forcing the fifth set.

Sophomore Jemma Yeadon had a day to remember, finishing with a career-high 24 kills to lead the Irish. The trio of Sam Fry, Rebecca Nunge and Lauren Woodard each finished with 10 kills to propel Notre Dame to the victory.

HOW IT HAPPENED
The Irish came out ready to play in the first frame, jumping out to an early lead that they never relinquished. Notre Dame led by as many as seven points in the set at 14-7 before going on to win by a score of 25-21. Notre Dame’s defense was exceptional, holding Florida State to an attacking percentage of -.027 in the set.

The Seminoles regrouped in the second stanza and controlled most of the set. Florida State held a 22-15 lead and then the Irish staged a comeback. Notre Dame won seven of the next eight points to cut the visitor’s advantage to just one at 23-22 but Florida State was able to do just enough to close out the frame with a 25-23 victory to level the match at 1-1.

Florida State carried its momentum from the second set into the third, building an early lead at 5-1. The Seminoles did not trail for the rest of the set, as Notre Dame was unable to put a big run together to pressure the visitors. Florida State took the set by a score of 25-19 to grab a 2-1 lead in the match.

Notre Dame found another level of play in the fourth set and dominated the Seminoles en route to a 25-12 win to level the match at 2-2. The Irish held Florida State to just four kills in the entire fourth set, while Notre Dame put down 15. Lauren Woodard came off the bench to play a big role in the frame, registering six kills on 14 attempts to spark the Irish attack.

The Irish were not going to be denied the win on Sunday, as the team played the fifth set with passion and confidence. Yeadon hammered four kills in the first five points to give Notre Dame an early 4-1 lead. The Seminoles rallied and took a one-point advantage at 7-6. The Irish then called on Woodard who delivered by reeling off four straight kills to put the squad on top for good at 10-7. Notre Dame closed out the match with a 15-12 win in the fifth to seal the comeback victory at 3-2.

“We are in this thing together. Going back a match we let one get away. Everybody contributed to this win and I told them that everyone had to be better, including the coaches, and we were. We responded and we kind of did it the Notre Dame way. We grinded and played consistent. I told them the worst thing you can do is not be who you are and today we were Notre Dame for sure.

“Like in practice, we are solving problems. We have to do that in the match. Jemma for sure managed her game and solved some problems. She got it going and hit over .300 the last half of the match. Just good composure by her.”

PLAYER OF THE MATCH
Yeadon had a career day in the victory, finishing with a personal record 24 kills. The sophomore sensation also added 16 digs, five blocks and an ace to cap off her remarkable performance. Yeadon’s 24 kills are the most for an Irish player this season. In the shortened fifth set alone Yeadon tallied seven kills.

ND STAT OF THE MATCH
Notre Dame’s attack came alive in the fourth and fifth sets, as the Irish racked up 29 kills on 62 attempts, while only making five errors for an attacking percentage of .387. Yeadon paced the Irish with 11 kills in the final two sets while Woodard added 10. Senior Caroline Holt was excellent in distribution, totaling 25 assists in the two frames and finishing with a season-high 59 for the match.

PLAYER OF THE MATCH
Yeadon had a career day in the victory, finishing with a personal record 24 kills. The sophomore sensation also added 16 digs, five blocks and an ace to cap off her remarkable performance. Yeadon’s 24 kills are the most for an Irish player this season. In the shortened fifth set alone Yeadon tallied seven kills.

ND STAT OF THE MATCH
Notre Dame’s attack came alive in the fourth and fifth sets, as the Irish racked up 29 kills on 62 attempts, while only making five errors for an attacking percentage of .387. Yeadon paced the Irish with 11 kills in the final two sets while Woodard added 10. Senior Caroline Holt was excellent in distribution, totaling 25 assists in the two frames and finishing with a season-high 59 for the match.

NOTES OF THE MATCH
Notre Dame improves to 8-1 on the season when playing at home.
The Irish are 3-1 on the season against ranked opponents.
Notre Dame posted 12 team blocks against the Seminoles and have now recorded 10+ team blocks in 10 matches this season.
The Irish had four players record 15+ digs against the Seminoles, marking the first time the team has accomplished the feat since doing so against Louisville on September 23, 2012.
DeJarld tallied 20+ digs for the 12th time this season with 29.
DeJarld led the team with three aces and has now recorded at least three aces in three matches in 2017.
Natalie Johnson became the 15th player in program history to reach 1,000 digs for her career. Johnson finished with 15 digs and has 1,008 for her career.
Morningstar tied her career high in blocks with 11 to lead the team.
Caroline Holt notched her sixth double-double this season with a season-high 59 assists and 16 digs.
Yeadon has recorded at least 10 kills in all 13 matches she has played in during the 2017 season.
Yeadon notched her 10th double-double in 2017 (24 kills, 16 digs).

UP NEXT
Notre Dame hits the road next weekend, as it travels to the state of Virginia for a pair of ACC matches. The Irish take on Virginia at 7 p.m. on Friday, Oct. 6 and then face Virginia Tech at noon on Sunday, Oct. 8.

The No. 21 Florida State volleyball team fell to the Notre Dame Fighting Irish 3-2 on Sunday (Oct. 1) to finish up its second weekend of conference play 0-2.

The Seminoles saw its lowest offensive efficiency in the first set, hitting in the negatives with eight kills and nine errors. The team’s defense kept the set tight, holding the Fighting Irish to just .043 hitting with five team blocks and 21 digs. Florida State struggled to get the edge on offense which eventually helped Notre Dame take the first set 25-21.

The second set saw better offense on both sides, but both teams’ tough defense kept the set tight. Through two sets, the Seminoles had seen 53 digs, eight team blocks and had held Notre Dame to just .090 hitting. FSU took an early lead in the set and held it throughout to win 25-23 and tie up the match 1-1.

The tempo of Florida State’s offense improved in the third set, as the Seminoles saw its highest hitting percentage of .286 with 18 kills on 49 attacks with only four errors. The improved efficiency was just enough to help FSU stay ahead throughout the set, taking it 25-19.

In the fourth set, the Fighting Irish came out swinging, hitting .367 while the Seminoles were held to a negative hitting percentage. The Notre Dame offense proved to be to too much for Florida State, as it stayed ahead to win the set 25-12 and tie up the match 2-2.

The Fighting Irish used its momentum to push harder on offense in the fifth set, earning 14 kills and only one error to hit .406. The Seminoles started off strong, but Notre Dame was able to pull ahead and go on a run through the end of the set. While the Seminoles’ defense had been strong through the first four sets, they were only able to record 14 digs, which was not enough to keep them in the set. Notre Dame took the fifth set 15-12 to win the match 3-2.

Florida State will return home this week to host Miami on Wednesday, Oct. 4 and Pittsburgh on Friday, October 6 (both at 6:30 pm) at Tully Gym.