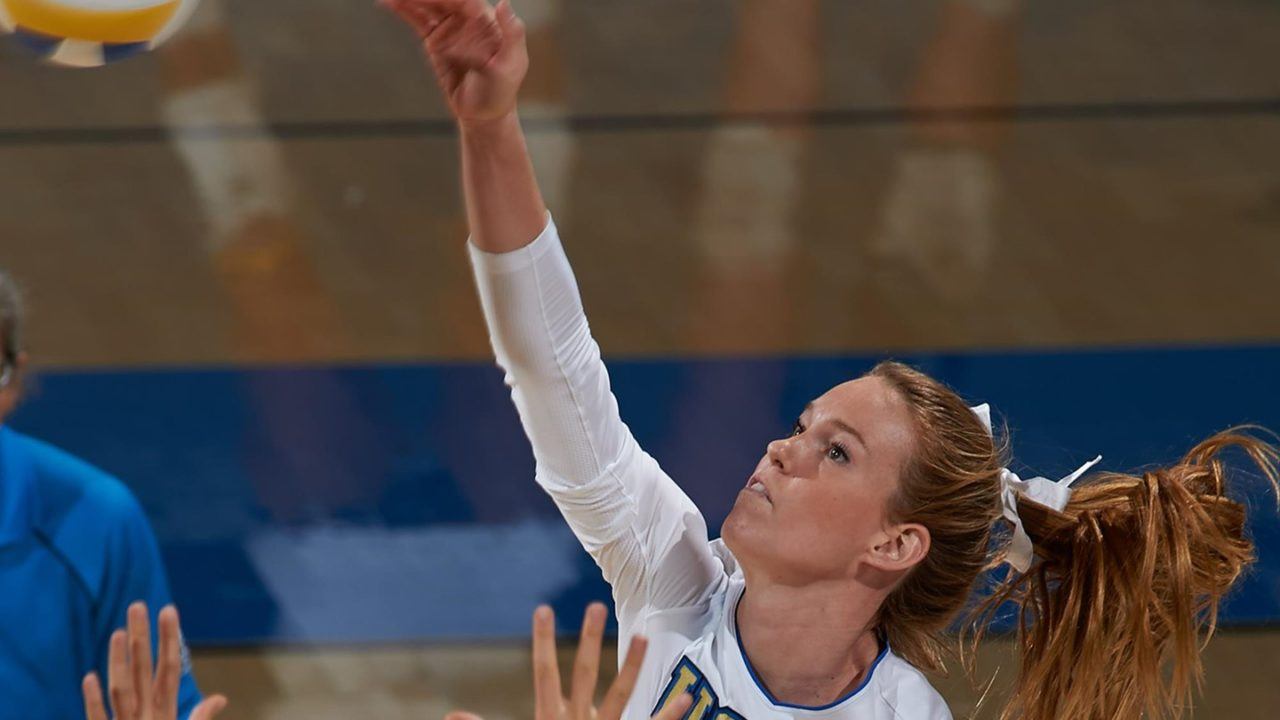 Senior outside Reily Buechler recorded 21 kills and hit at a .465 clip to help the UCLA Bruins defeat the visiting Washington State Cougars in four sets. Archive Photo via UCLA Athletics

The #17 UCLA Bruins used a strong offensive performance from senior outside Reily Buechler to overcome a third-frame setback and defeat the visiting Washington State Cougars in four.

Buechler was virtually unstoppable for the home team, hitting at a .465 clip while notching a season-high 21 kills. For the third consecutive match, senior setter Sarah Sponcil registered a double-double (46 assists, 16 digs). Other key contributors for the Bruins included freshman outside Jenny Mosser, who tallied 17 kills, and junior Zana Muno, who dug 23 Washington State attacks.

UCLA came out strong in the first frame, taking an early 5-o lead and never looking back on their way to a decisive 25-12 victory. In the second, the Cougars established an early 6-5 edge, but the Bruins responded with a 4-1 run that included three Mosser kills and another by Buechler. The Bruins went on to win by an identical 25-12 margin.

Set three seemed like it would be more of the same as UCLA marched out to a 17-12 lead before the Cougars stormed back, scoring six straight to take its first lead of the set at 18-17. They went on to win 25-22 on a kill by junior outside Taylor Mims and a Bruin attack error.

The fourth frame resembled the first two sets with UCLA taking command early, the only drama coming when the Cougars went on a five-point run to close within three points at 13-10. The Bruins regained control, however, and the match ended on two Buechler kills, a Cougar attack error and a Bruin block by Sponcil and sophomore middle Madeline Gates.

UCLA travels to Tucson for a midweek match with the Arizona Wildcats on Wednesday, while the Cougars host #22 Colorado on Friday.

LOS ANGELES – Senior Reily Buechler had a season-best 21 kills to go with a .465 hitting percentage and six digs, while senior Sarah Sponcil recorded her third double-double in a row with 46 assists and 16 digs, as the 13th-ranked Bruins knocked off Washington State in four sets on Sunday at Pauley Pavilion. Set scores were 25-12, 25-12, 22-25, 25-13.

UCLA (9-4, 2-2 Pac-12) led from start to finish in set one, scoring the match’s first five points on a Rogers/May block, a Buechler/Gates roof and three Washington State errors. At 9-4, two Mosser kills, a Rogers solo block and a WSU error put UCLA up 13-4. The Bruins’ lead reached double figures for the first time at 15-5 and went as high as 14 at 24-10. The Cougars saved the first two set points, but a Mosser kill completed a 25-12 victory. Mosser was error-free with five kills in nine swings, while Gates added three kills. Muno tallied six digs. The Bruins hit .357 and held the Cougars to a -.133 percentage.

Washington State (12-4, 1-3 Pac-12) scored three of the first four of set two, and led by one as late as 6-5, but a 4-1 Bruin run on three Mosser kills and one by Buechler gave the home team the lead for good. At 15-10, UCLA scored four in a row on kills by Buechler, Gates and May and a bad set by WSU. The lead got to double digits for the first time at 22-12, as the Bruins scored the last five points of the set on kills by Buechler and Sponcil, a Buechler ace, a Gates/Sponcil block and a Mosser kill to win the second 25-12. Buechler was error-free with six kills in 11 attempts, Mosser added five kills and May was 4-for-5 with no miscues. Muno posted seven digs. The Bruins out-hit the Cougars .421-.156.

The Bruins jumped out to an 8-2 lead in set three on three Buechler kills, two May aces, a Rogers ace and two Cougar errors, and led by as many as five as late as 17-12 before a big comeback by the visitors. Washington State scored six straight to take its first lead of the set at 18-17. Two Mosser kills put the Bruins back up, but the next four went to Washington State to give the Cougars a 22-19 edge. UCLA got to within one at 22-21 and 23-22, but WSU netted the last two to win the third 25-22. Buechler was error-free with six kills in 10 attempts, Mosser added five kills and Muno posted seven digs, as the Bruins were out-hit .333 to .071.

Like set one, the Bruins led wire-to-wire in the fourth to finish off the victory. UCLA scored the first four points on kills by May, Rogers and Buechler and a WSU attack error. The Bruins’ lead got to eight at 13-5 before the Cougars had thoughts of another comeback thanks to a 5-0 run. But UCLA netted the next three on kills by Mosser and May and a WSU error and led by at least five for the rest of the set. At 21-13, the Bruins scored the last four on two Buechler kills, a Cougar attack error and a Sponcil/Gates block to wrap up the 25-13 win. Buechler was error-free in the fourth with seven kills in 14 attempts, while May added three kills. Sponcil had five digs. The Bruins hit .371 to the Cougars’ .000 clip.

The Bruins are on the road next week, traveling to Tucson to take on Arizona on Wednesday at 7 p.m. The match will air on Pac-12 Networks.

Volleyball Loses in Four Sets at No. 13 UCLA

Junior Claire Martin continued her assent of the Cougars career block assists records with five today that brings her total to 318 which is ninth-best and 11 away from the number eight spot.

WHY & HOW…
WSU Head Coach Jen Greeny said, “The passing didn’t improve from yesterday and that is something we really need to get working on when we get back to practice. We just couldn’t get going offensively either and that comes with the lack of passing. I thought we fought in that third set and that was good to see. But we have to keep that (momentum) more consistent throughout the match.

“This is not the typical Greeny team as far as a lot of passion and fighting for every ball, fighting for every point. The intangibles is what concerns me as much if not more than the physical skills. We have to figure that out. It will be nice to get back to Pullman and Bohler Gym, and practice and get better.”

Senior outside hitter McKenna Woodford said, “We have glimpses of greatness, and moments of pure grit and tenacity. We simply just need a lot more of it on a more consistent basis. Both USC and UCLA have certain skills that they do very well and it was so good for our team to experience those things, especially given that many of our girls have not necessarily experienced high level volleyball or are experiencing it in a completely different position. We took a set off of two great teams while still playing way below our standards. We are so capable and have so much potential, it’s just a matter of tapping into that potential, believing in ourselves, becoming better volleyball players in practice, and making the decision to fight through adversity. The beautiful thing about being a Cougar is that we never back down. We will use this weekend’s struggles to fuel our fire and get after it in practice so that we can be better going into next weekend.”