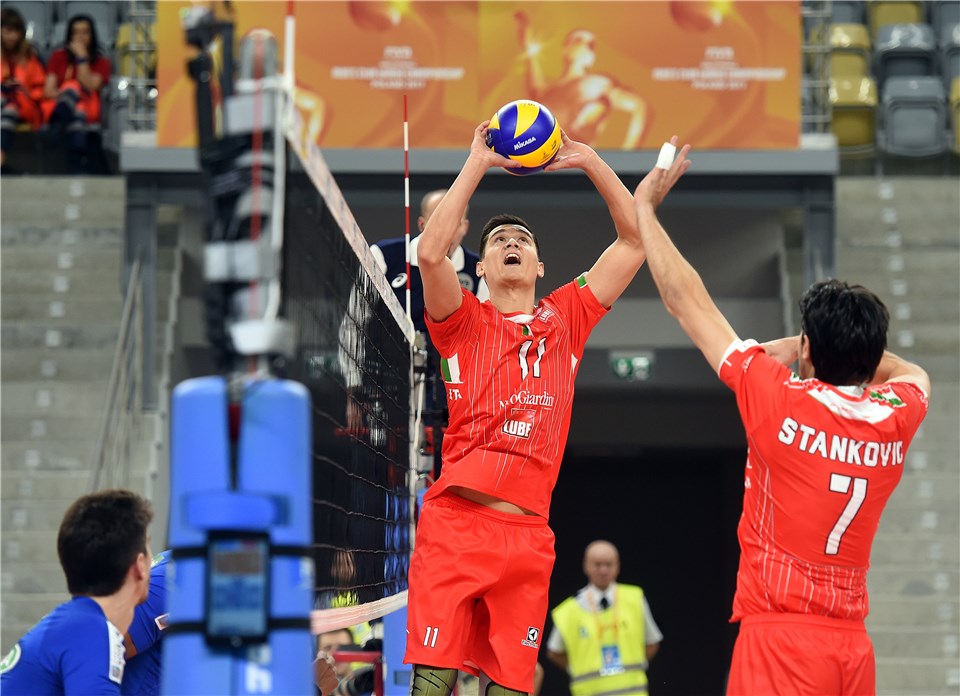 Day 1 of competition in Poland was everything volleyball fans could have hoped for from one of volleyball’s most exciting tournaments.  Fans were treated to dominating performances, upsets, and come from behind victories. Below, we’ll summarize all of the day’s action:

Srecko Linisac posted one of the most impressive stat-lines for a 3 set game that we’ve ever seen here are at Volleymob. In all, he had 25 points on 12/17 hitting (71%), while also contributing with 6 blocks and 7 aces in his team’s win against Shanghai. Had this game gone to a tie-break, he could’ve reached a triple double, an amazing feat for a middle blocker at this level of play.

Team of the day: Lube Civitanova

Lube Civitanova was able to pull a major upset by sweeping Sada/Cruzeiro in its first game of the tournament. Not only did it impose the current champions a 3-0 loss, it also did so in dominating fashion, hitting over 60% as a team, out-blocking Cruzeiro 11 to 3 and receiving at a 55% clip to Cruzeiro‘s 25.9% performance.

For two sets, two-time Asian champions Sarmaye Bank silenced the 2,800-strong sellout partisan crowd at Opole Arena as they led reigning Polish champions ZAKSA Kedzierzyn-Kozle 2-0, before the Polish championrs found the way to turn the game around and open their 2017 FIVB Men’s Club World Championship with a thirlling five-set win 3-2 (19-25, 20-25, 25-16, 31-29, 17-15).

It took a nail-biting fourth set as the Iranian side came from behind and the Poles denied them a total of four match points before capitalizing on their own fourth set point to force a tie-break. ZAAKSA had to cancel two more match points of Sarmaye Bank in the fifth to bring the game home. Sarmaye Bank outblocked ZAKSA, but the home side kept the pressure from the service line, as Puertorican Maurice Torres led the winners with 26 points.

Andrea Gardini, ZAKSA Kedzierzyn-Kozle Coach: “Congratulations to both teams. We saw some good serves, defence, some players showed really good blocking skills. At first we were surprised. The Iranian team played so good, there was so much tension, their volleyball was so good. I’m very happy we came back for the third set, my players got more focused and point by point we made it. The level of volleyball was a little bit higher. I’m very happy about the final result, of course, but for the next matches, we cannot allow ourselves start with so much tension. Congratulations to my good friend, Lukasz Zygadlo [Polish setter of Sarmaye Bank] – he improved a lot during his time in Iran, so I congratulate the coach for helping Lukasz in getting so much better.”

Benjamin Toniutti, ZAKSA Kedzierzyn-Kozle Captain: “We are really happy that we won the match, but I’m aware that the first two sets were really bad on our part. We were a bit surprised with the technique of our opponent, despite the fact that we watched many of their matches on video. After the first two sets, we started playing better, that’s why, despite everything, I think that the match was a good show. Tomorrow it will be different style, different type of volleyball. I know that as a team we will be fighting and it can be great.”

Mostafa Karkhaneh, Sarmaye Bank Tehran Coach: “I am really happy that the fans and spectators enjoyed the match – it was a great game. We were more concentrated in the first two sets, which we won. The fans of ZAKSA are very, very effective and they played a part in this win. When we won two sets, I said to my players that the other team can become very dangerous, as they have nothing to lose, they can serve with higher risk, thus scoring more points. In the Premier League of Iran we do not have teams like ZAKSA, serving with higher risk, jumping when serving. But we did our best and we congratulate, again, ZAKSA. We hope we will win the next two games. We know it’s volleyball, and in volleyball everything can happen.”

Mehdi Mahdavi, Sarmaye Bank Tehran Captain: “I think everybody should like how this match looked. Congratulations for ZAKSA, who lost the first two sets, but in the end managed to win. I think we deserved to win, but we were simply out of luck. But this is volleyball. Once again, congratulations to the winners.

Russia’s Zenit Kazan started off their campaign in Pool B of the FIVB Volleyball Men’s Club World Championship in the best possible way. The Russian powerhouse mastered a 3-0 (25-20, 25-19, 25-17) victory over Argentina’s Personal Bolivar in the opening match at the magnificent Atlas Arena in Lodz on Tuesday.

Maxim Mikhaylov contributed 18 points to Zenit’s win to become the best scorer of the match. His teammates Alexey Samoylenko and Wilfredo Leon added 14 and 13, respectively. Theo Lopes topped the charts on Personal’s side with 9 points, followed closely behind by Rozalin Penchev with 8. Bolívar was out-blocked 12 to 5 in the game, while also surrendering Zenit 24 points from errors. This was the first match between these two teams in the history of the Club World Championships.

Vladimir Alekno, coach of Zenit Kazan: “We showed good volleyball. I like the way the team played tonight. It was not easy, but it is the beginning of the tournament.”

Maxim Mikhaylov, player of Zenit Kazan: “We played as one team today and it was the key to the victory over a very good opponent. It is the most important thing before the next games in the tournament.”

Javier Weber, coach of Personal Bolivar: “Till the 18th point we played our volleyball, but then we were lost. A month ago we lost our first setter, so we need to work with what have. We do not have high expectations; we just want to play our best.”

Milos Nikic, player of Personal Bolivar: “Playing against the best team in the world was not easy. We had our chances, but the experience and the power of Zenit proved decisive. Tomorrow we will play our most important game here, against Skra Belchatow.”

The home crowd at the Atlas Arena in Lodz was pleased to see their favourites from Skra Belchatow start off in Pool B in the FIVB Volleyball Men’s Club World Championship with a convincing victory. Inspired by the noisy support from the stands, the Polish squad mastered a 3-0 (25-18, 25-19, 25-21) win against China’s Shanghai Golden Age.

Serbia’s Srecko Lisinac scored a smashing seven aces and six kill blocks for a total of 25 points on the winning team’s tally, which made him the best scorer of the match. His teammate Mariusz Wlazly added another 18. Shuhan Rao and Julien Lyneel shared the honours on the Chinese squad’s side of the net with 12 points each. Skra out-blocked and out-served Shanghai 12 to 5 and 16 to 8, respectively, for the match.

This was Shanghai’s debut at the Club World Championships and the first encounter between these two sides. Skra has never lost to an Asian team in the history of the competition.

Roberto Piazza, coach of Skra Belchatow: “It was really important to come into the game quickly, because it was our first match. Skra showed that is a good team. We put a lot of pressure in serving, but we made many mistakes, to be honest. Mistakes are a part of the game, so we need to accept the fact and play. Now we have to eliminate these and play better, because our next opponents will not be any easier. Volleyball is about putting the pressure and always moving forward. When I leave this conference room I will forget about tonight’s match and start thinking about the future.”

Mariusz Wlazly, captain of Skra Belchatow: “We began well in this prestigious tournament in Poland. It is a good opportunity to play against the best teams from around the world. We were a bit afraid before this match, but now we are happy before the next games.”

Grzegorz Lomacz, player of Skra Belchatow: “We took this game very seriously. Our serve was pretty good; actually each element of our game was nice, so the score is the effect of it. We are fresh and relaxed, because in the Polish League we were lucky to play home games last month.”

Shen Qioung, coach of Shanghai Golden Age: “We lost so many points in reception; we were weak at this element. Our attack also was not perfect. We need to change a lot of things and play the next two games in better way.”

Facundo Conte, player of Shanghai Golden Age: “The third set was not bad. It was the best in the match. We were just helpless against Skra, who played on a very high level tonight.”

Italian champions Cucine Lube Civitanova demolished the defending world champions Sada Cruzeiro of Contagem 3-0 (25-21, 25-16, 25-18) as the opening day at the 2017 FIVB Men’s Club World Championship wound down. It took Lube just 78 minutes to get the job done and take an early lead in the standings of Pool A.

Tsvetan Sokolov led the way for Lube with 20 points on 12/17 hitting and 6 aces. Robertlandy Simon had 11 points in the losing effort, while Yoandy Leal really looked out of his groove with only 7 points and several reception errors. He also was involved in a fight with teammate Sérgio Nogueira in the third set.

Lube out-serviced Cruzeiro 11 to 3 in the match. It was the first defeat for Cruzeiro in the FIVB Club World Championships after nine straight wins. Their last loss was on 10 May 2014 in five sets to Argentina’s UPCN San Juan in the bronze medal match of the 2014 edition of the competition.

Giampaolo Medei, Cucine Lube Civitanova Coach: “For sure, I am very happy about the match and the way we started this competition. We served really good, and our attack was top level. It may have been one of the best matches of the season for us. I know this is just the first match, and that tomorrow we play another one, with a different team. The tournament has just begun, but we started it the right way, although it will be hard to reach the finals. I’m just happy about the way we started and how the team played this evening.”

Osmany Juantorena, Cucine Lube Civitanova Captain: “I am really happy. We won against a really good team, which won the last two world championships. Now, we are thinking about the next match. This will be a long and difficult tournament.”

Marcelo Mendez, Sada Cruzeiro Coach: “First, let me congratulate Civitanova. It was a good game. The main difference was service, but tomorrow there is another day, and we will try to play as best as we can.”

Filipe Ferraz, Sada Cruzeiro Captain: “We knew the game would be difficult and very hard. We made some mistakes in service. This game was very difficult in service and setting. We now have to think about tomorrow and forget about today.”