Pair of Fifth-Year Senior Transfers Head to Gonzaga for 2018 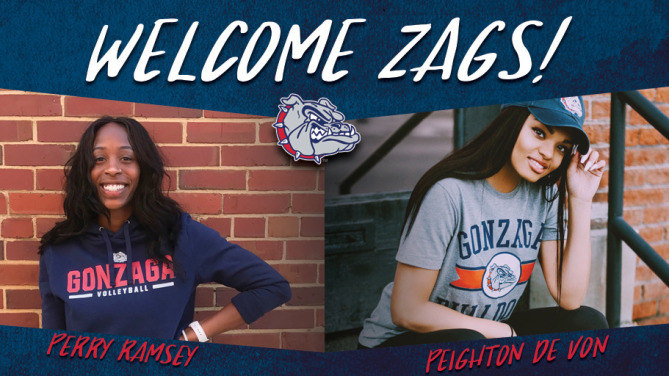 Gonzaga is adding a pair of redshirt senior transfers to their roster for 2018. Archive Photo via Gonzaga Athletics/Volleyball

A duo of transfers are heading to the Gonzaga women’s volleyball program for 2018 in middle blocker/right side Peighton De Von from Nevada and outside hitter Perry Ramsey out of North Carolina State. Both players will be immediately eligible, fifth-year seniors in the fall with one season left of play.

A 6’0″ native of Spokane, De Von joins a group of three returning middles and four opposites with the Bulldogs. After attending Shadle Park High School, she redshirted in 2014 which preceded three years of play with Nevada. That culminated last season when she started all 30 matches and led the team in blocks with 102 (0.94 per set) and was second in kills with 224 (2.24 per set) on a .248 mark. Those numbers led to her listing on the All-Mountain West Honorable Mention team.

“Peighton fit right in with this group from her first visit,” Gonzaga head coach Diane Nelson said in the team’s release of the additions. “She is comfortable in our environment, and confident in what she has learned through her collegiate experience. I believe Peighton adds depth to our offense, and has the ability to take over at the net. She will make an impact immediately.”

“We are really excited to get Perry in our gym,” Nelson added in the release. “From the first conversation, she had such an enthusiasm for getting the opportunity to play one more season. Not only is Perry bringing experience and athleticism to us, she is a leader and has exhibited such maturity in the process of recruiting. Her ability to make those around her better is a product of her genuine care for others.”