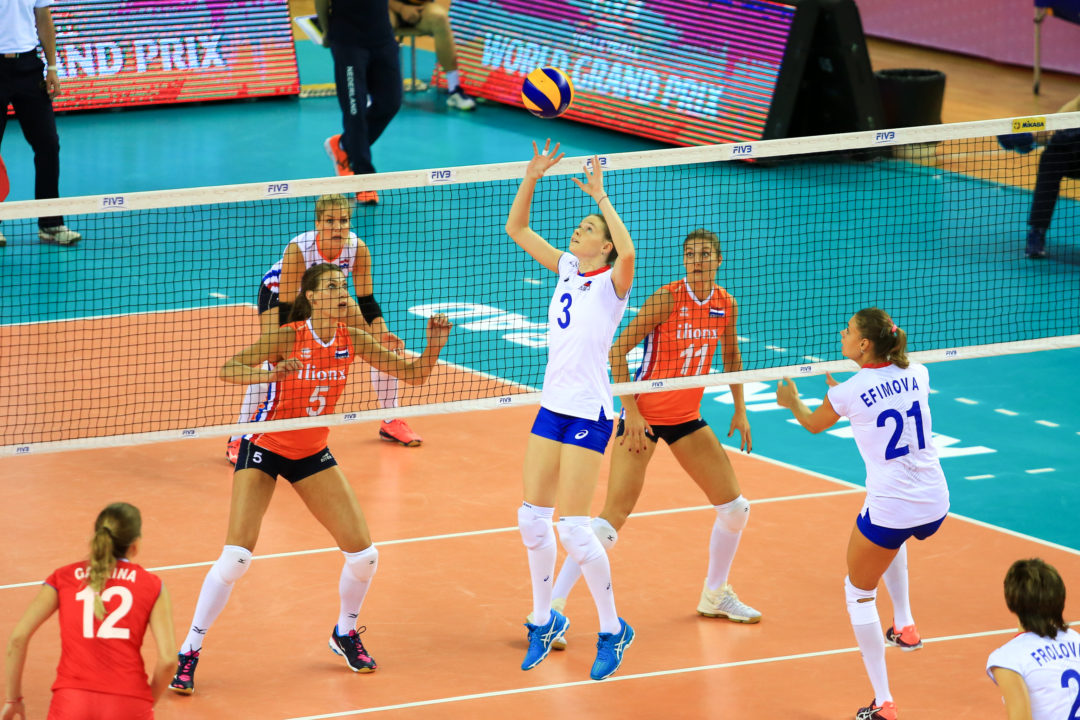 The fact that Pankov is Ekaterina Pankova's dad, a successful national teamer who was forgotten by coaches n 2017, only raises the issue if his statements have any conflict of interest in them. Current Photo via FIVB

In addition, it looks like the team’s setter for most of 2017, Irina Filishtinskaya, is also to be ostracized from the team. She was singled out by the team’s new coach, Vadim Pankov, in an interview given to Championat.com. The fact that Pankov is Ekaterina Pankova‘s dad, a successful national teamer who was forgotten by coaches in 2017, only raises the issue if his statements have any conflict of interest in them.

Below, you’ll find the best excerpts from one of his first media addresses since taking over’s the team head coaching job:

Pankov, what are your immediate goals with the national team?
– We need a result already at the 2018 World Cup

Aren’t you putting too much pressure on your yourself? If you suddenly fail, the coach is always to blame.
– It is necessary for someone to break the current bad streak. Before the meeting with the Volleyball Federation’s president, we agreed that regard that regardless if Rishat Gilyazutdinov or myself would be appointed as the team’s new head coach, that we would withdraw the national team from this crisis.

Which of the items on the program you presented to the Volleyball Federation would you consider key?
– Probably, the formation of the team, in which there would be an optimal combination of experienced and young players, which must be a preview for the 2020 Olympics.

What task did the federation set before you when you made a decision about the appointment?
– Fighting for a World Cup medals and reaching the final.

It turns out, there is no time for a serious renewal of the team?
– Well we have the League of Nations, where I’ll be able to evaluate many players. The best players will go to the World Championship. Experiments in this case are unacceptable.

Will the composition of the national team change significantly in comparison with the European Championships?
– No, not much. We have excellent middle blockers and opposites. I want to still have Natalia Goncharova and Tatyana Kosheleva playing. But we have problems with the reception.

Do you already have a new setter?
– We need a player with higher game speed. But who exactly will be the main setter, I can not say. As candidates I will consider Evgenia Startseva, Marina Babeshina, Tatyana Romanova, ad Daria Rysyev. True, about the last two I’ll to need to watch how they will look at the end of the Russian Championship, their fitness level. I will also consider my daughter Ekaterina Pankova as a candidate, but she has certain health problems. I will not go into details. A Healthy Pankova would compete for a place in the team. But, who will not be in the national team exactly – Irina Filishtinskaya. At least this year. Here the question is closed unequivocally.

Will there be untouchables in your team?
– Of course not. Whoever is stronger will play.

Will the age of the athletes be important to you?
– No! If a person can play – she will be in the composition. I repeat, I will take the best team. According to statistics, by nature, by psychology.

The psychological situation of last year’s team was not the best. How will you solve this issue?
– In a traditional way – to work and train. Believe me, if the results go up, the situation will be forgotten. All problems that were in the past, we will solve.

What was the main problem of our team at the last European Championship?
– The fact that the coaching staff played with the wrong players. I am convinced of this.