Park (Mo.) claimed the No. 1 spot in the latest edition of the 2018 NAIA Women’s Volleyball Coaches’ Top 25 Poll, the national office announced on Tuesday. Current Photo via Park University Athletics 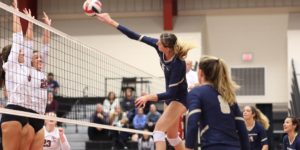 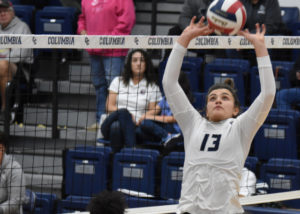 KANSAS CITY, Mo. – Park (Mo.) claimed the No. 1 spot in the latest edition of the 2018 NAIA Women’s Volleyball Coaches’ Top 25 Poll, the national office announced on Tuesday. The 5-0 Pirates moved up four spots from No. 5.

– The Pirates opened the season with an undefeated 5-0 record. Park not only has an undefeated match record but also is undefeated in sets as each of their five wins were won in three sets.

– Park is led by returners Dana Gomes and Nada Meawad who were both named setter and attacker of the week respectively for the week of Aug. 27 – Sept. 3. See release here

– Lindsey Wilson holds the longest active streak in the Top 25 with 59 total appearances. The last 28-consecutive appearances have been in the top five.

– There has only been one program that has been able to maintain the No. 1 ranking for an entire season, with former member Fresno Pacific (Calif.) accomplishing the feat in 2004, 2008 and 2009.

– The poll was voted upon by a panel of head coaches representing each of the conferences, Association of Independent Institutions and Unaffiliated Groups.

– The Top 25 is determined by a points system based on how each voter ranks the best teams. A team receives 30 points for each first-place vote, 29 for second place and so on through the list.

– The highest and lowest ranking for each team (a non-rating is considered a low rating) is removed and the team’s ranking will be recalculated with an additional point added to each team for every ballot (including discounted ballots) that the teams appear on.

– The frequency of polls occurs bi-weekly. This policy was approved by the National Administrative Council (NAC) for the 2016-17 academic season. This change will allow raters the opportunity to consider a larger body of work in between rating periods.