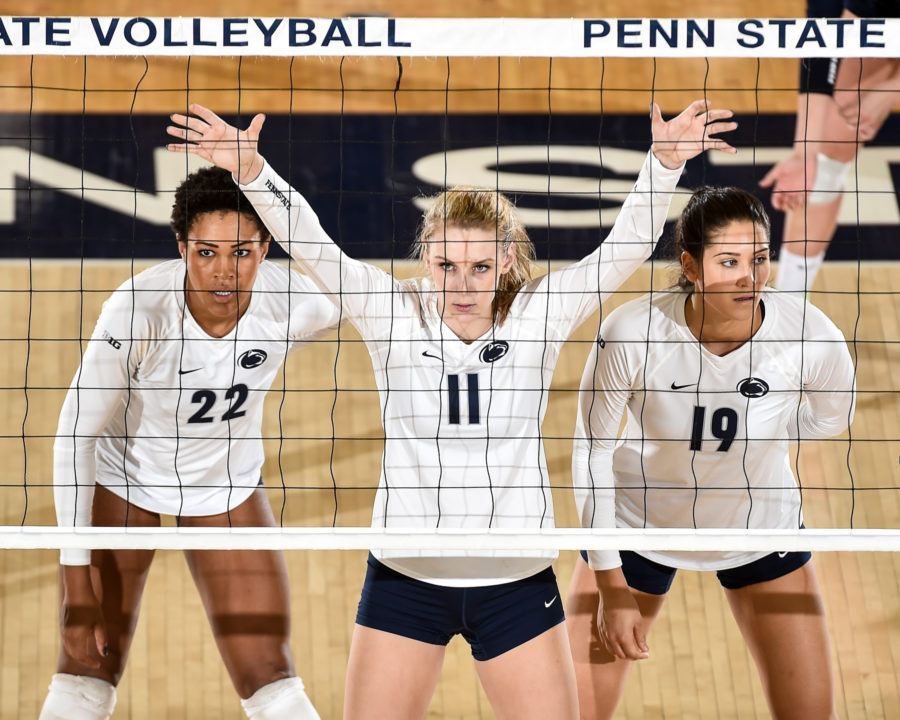 Two weeks ago, Penn State and Rutgers squared up in a match that ended ugly for the Scarlet Knights, scoring only 5 points in the final set.

While no one set was quite as lopsided on Saturday, Rutgers was still held to the same 39 total points in a 3 set sweep to Penn State – who was buoyed by a homecoming-weekend crowd of 5,312 at the Penn State Rec Hall.

“I thought the story of the night was the great crowd,” Penn State head coach Russ Rose said. “It was terrific. I know the players appreciate getting a crowd like that in there…We’re certainly never going to be disappointed when we have a full gym like that.”

Penn State hit .425 as a team in the three-setter, and was able to work 15 players into their rotation. That’s the 5th time this season that Penn State has hit higher than .400.

With working so many into the rotation, Penn State didn’t have anyone with more than 11 kills – but three players did get into double digits – Simone Lee with 11 (.286 average), Haleigh Washington with 10 (.750 average), and Tori Gorrell with 11 (.714 average).

Meanwhile, Rutgers had only two players hit for a positive percentage, led by Merne Fletcher with 9 kills (4 errors, 29 swings, .172).

Rutgers hit overall just .024 – a much poorer performance than when these teams matched up two weeks ago – perhaps indicating some fatigue from being at the end of a run of 6-straight matchups against Top 25 opponents.

“I thought the story of the night was the great crowd,” head coach Russ Rose said. “It was terrific. I know the players appreciate getting a crowd like that in there…We’re certainly never going to be disappointed when we have a full gym like that.”

The Nittany Lions and the Scarlet Knights were exchanging points back-and-forth early in the first set, but redshirt freshman Tori Gorrell hammered the ball over the net for a kill that sparked Penn State’s offense. The Blue and White continued their offensive streak to create a six-point stretch that eventually led them to win the opening frame, 25-13. Gorrell finished the first set leading the team with five kills.

Gorrell ended the night with a team-high 11 kills on .714 hitting, leading the offense for the first time in her collegiate career. She also recorded three blocks. Junior Simone Lee notched 11 kills, as well, while also adding six digs and three blocks.

Junior Haleigh Washington rounded out the effort recording 10 kills, hitting a team-best .750, where she put away kills on six of her seven swings through the first two sets. Washington also had two digs and a match-high of five blocks.

Rutgers opened the scoring in the second set and Penn State tried to catch up early on, but the Nittany Lions were still down by two points. However, after a quick regroup on the court, Penn State went on a 7-1 run to get the lead and a two-set advantage in the match.

“You can feel everyone [in the crowd] with us, too, for every single point,” senior Carley Muller said. “People are invested in the game – they’re ready for us to win. [When we were trailing], I think we wanted to come back and win it for the crowd. Obviously, we could feel that everyone wanted us to win, and we could tell that everyone was investing in what we were doing. We just wanted to get them the win.”

With the win over Rutgers, Penn State has now won its last 12 straight victories, improving to 6-0 in Big Ten conference play. The Nittany Lions aren’t going to let that record interrupt their focus.

Penn State will hit the road next week to continue its Big Ten conference play. The Blue and White will take on Purdue in West Lafayette, Ind. Friday, Oct. 14 and Indiana on Sat, Oct. 15 in Bloomington, Ind.

Meme Fletcher continued to pace the Scarlet Knights in kills with nine in the match. Lauren Cloyd followed with five kills of her own. Mikaela Matthews led the squad with three total blocks.

Penn State finished with three players with double-digit kills. Tori Gorrell and Simone Lee added in 11 kills, while Haleigh Washington followed with a 10 kills and a match-high .750 hitting percentage.

Despite trailing at the start, Rutgers held the margin close with Penn State at 6-5. Although the Nittany Lions jumped to a 12-6 advantage, the Scarlet Knights closed the gap within three at 13-10. From there, PSU discovered a surge to run away with the set, 25-13.

RU responded by rallying to a 6-3 lead over PSU at the start of the second set. The Scarlet Knights held its edge at 9-7, guided by two kills from Fletcher, before the Nittany Lions tied up the frame 10-10. Penn State halted the Rutgers momentum to reclaim the lead at 15-10. PSU continued to grow its edge to as many as 10 en route to a set two victory. Rutgers struggled to regain its rhythm in the third, as Penn State closed the set with its third straight set win of the match.

UP NEXT
Rutgers remains on the road with a trip to Indiana on Friday, Oct. 14 before a matchup at No. 17 Purdue on Saturday, Oct. 15. The Scarlet Knights contest with the Boilermakers will be broadcast live on Big Ten Network.

Rutgers has competed in six consecutive matches against a ranked foe or opponent receiving votes, including Penn State (No. 18, No. 15), Illinois (RV), Michigan (No. 22), Michigan State (No. 18) and Wisconsin (No. 2). Illinois has since jumped into the top 25 rankings.
Mikaela Matthews brought her career blocks total to 345 and is now eight blocks away from moving into the top five on the all-time career blocks list.