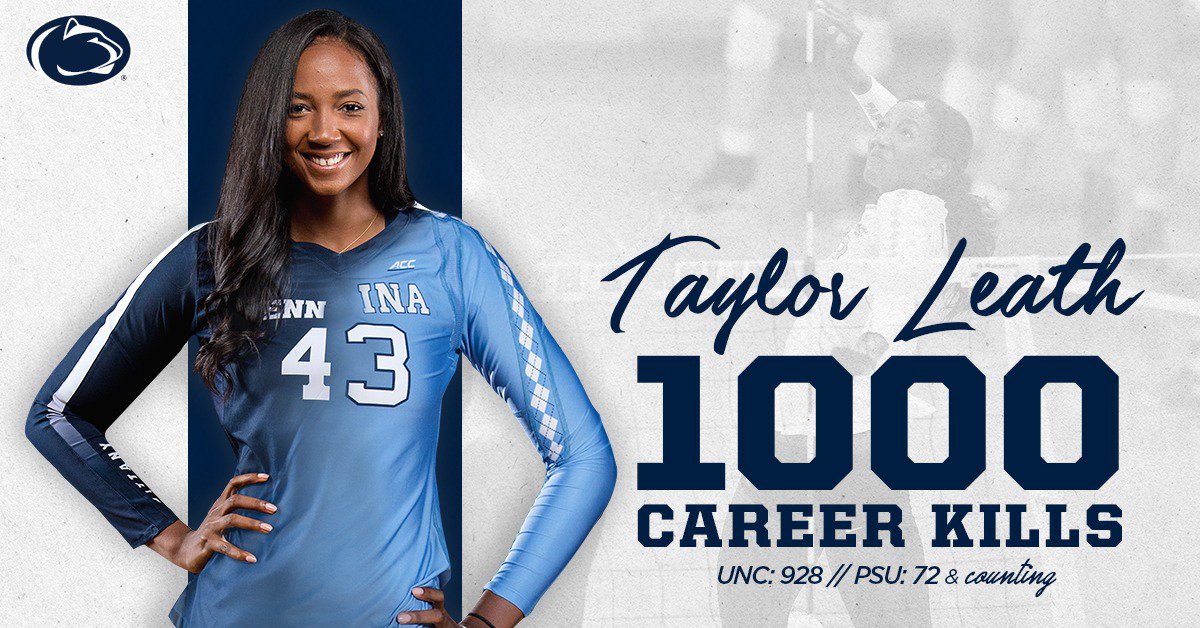 When she transferred to Penn State after a three-year career at North Carolina, Taylor Leath was just 72 shy of 1,000 kills. On Saturday, the graduate student reached the milestone with her third putaway in Set 1 of the PSU's match against American.  Current Photo via Penn State Athletics

When she transferred to Penn State after a three-year career at North Carolina, Taylor Leath was just 72 shy of 1,000 kills. On Saturday, the graduate student reached the milestone with her third putaway in Set 1 of the team’s match against American.

Leath posted 11 kills in the match, bumping her career tally to 1,008, en route to American Volleyball Classic all-tournament team honors. The Port Matilda, Pennsylvania native, also added eight digs and three blocks, while hitting at a .216 clip in the match. The double-digit putdown tally was her third in a Nittany Lion uniform (following 15 vs. Navy on Aug. 25 and 10 at Stanford on Sept. 7).

For the tournament, Leah managed 21 kills, 20 digs and eight blocks.

As a redshirt sophomore, she was a second team AVCA All-America honoree and garner ACC Player of the Year nods after posting 374 kills, 299 dig, 70 blocks and 19 aces, while hitting .252. She notched 10 double-doubles and three 20-kill matches.

In her first action as a TarHeel in 2015, Leah managed 218 kills, 97 digs and 56 blocks, including eight double-digit kill tallies and one double-double.

Penn State is 9-1 heading into Big Ten play with its league opener set for Wednesday at Minnesota. The match will air live on Big Ten Network at 9 p.m. ET.

S1 | And with that kill, Taylor Leath has reached the elusive 1,000 kill mark for her career. The graduate student got 928 kills and her bachelor’s degree with @UNCVolleyball, and she has 72 kills and counting while working on her master’s degree at Penn State! #WeAre pic.twitter.com/JGiHdOTOcq