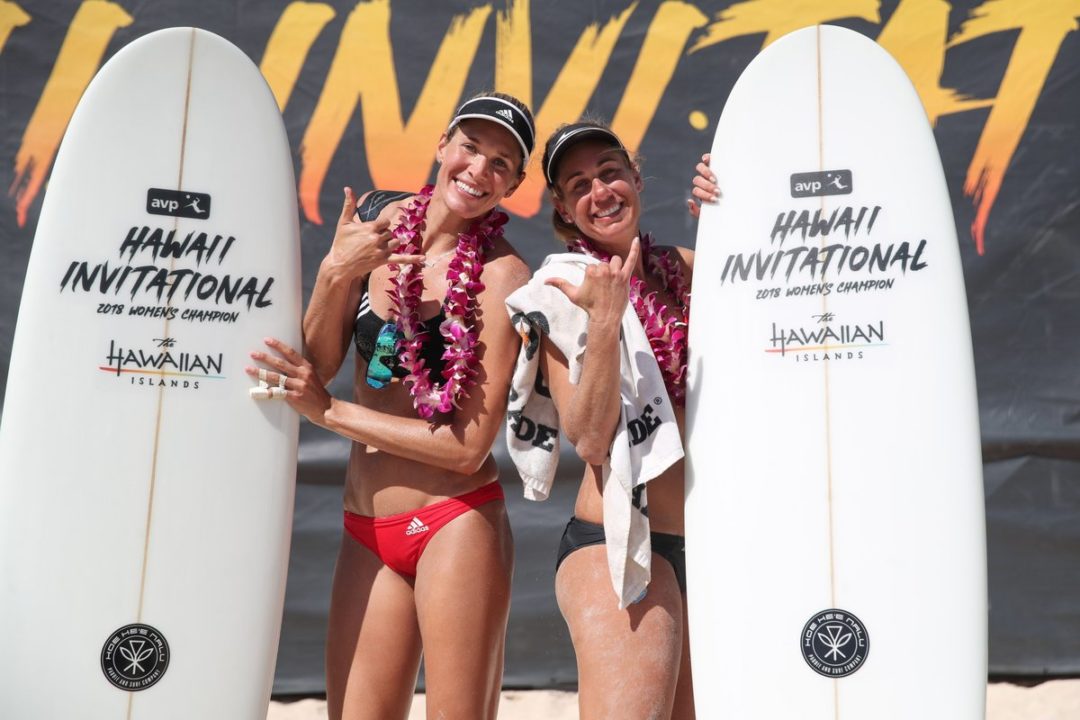 Americans April Ross/Alix Klineman and Phil Dalhausser/Nick Lucena wrapped up the 2018 AVP season with first place finishes at the Hawaii Invitational, for the $20,000 top prize and the fourth AVP crown of the year for both duos. Current Photo via AGamePhoto courtesy AVP

Americans April Ross/Alix Klineman and Phil Dalhausser/Nick Lucena wrapped up the 2018 AVP season with first place finishes at the Hawaii Invitational, besting a field including international players for the $20,000 top prize.

It was the fourth AVP crown of the season for both teams: Dalhausser/Lucena(alongside Austin, New York and Manhattan Beach) and third in a row for Ross/Klineman (also Austin, Chicago, Manhattan Beach).

Third seeded Klineman/Ross went 4-0 en route to the title, besting fellow Americans No. 2 seed Sara Hughes/Summer Ross in tiebreak (18-21, 21-19, 15-10) the championship match. Ross downed 29 kills, while hitting at a .511 clip and adding 12 digs in the win, while Klineman chipped in 10 kills, five blocks and two aces.

Klineman/Ross played just two foes in the eight-team event. The pair went to tiebreak in their tournament opening match against No. 6 Kelly Claes/Brittany Hochevar (21-17, 16-21, 16-14) before topping Hughes/Ross in Round 2 (25-15, 21-12) and Claes/Hochevar again in Round 3 after the pair came back through the contender’s bracket.

For the tournament, Ross turned in 78 kills, 50 digs and 10 aces, while hitting at a .480 clip. Klineman chimed in with 56 kills, including a match-high 19 in the first meeting with Hughes/Ross, 15 digs, eight aces and nine blocks, while hitting .454. With the two wins in Hawaii, Klineman/Ross moved to 4-2 on the season against Hughes/Ross.

Hughes/Ross bounced back from their Round 2 loss to Klineman/Ross with a 21-18, 21-14 win over Australia’s Mariafe Artacho del Solar/Taliqua Clancy in the contender’s bracket to reach the semifinals. Once there, the pair took out top seeded Brazilians Agatha Bednarczuk/Eduarda ‘Duda’ Santos Lisboa in tiebreak (23-25, 21-17, 15-12) to set up the rematch with Klineman/Ross and the $15,000 payday.

Ross downed 32 kills, put up four blocks and hit at a .508 clip in the upset of the Brazilians, while Hughes notched 21 digs and 10 kills. In the championship match, Ross tacked on 24 putaways and two blocks, while Hughes added eight kills and 12 digs. The victory over the Brazilians marked the pair’s second of the season following a win in the finals of the FIVB Moscow Four Star on Aug. 12, 2018.

The two international teams face off on one side of the bracket, with the Dutch duo winning in straight sets (21-19, 21-18). Dalhausser/Lucena, who lost their first round match of the tournament against Bourne/Crabb in tiebreak (21-15, 16-21, 15-7), got revenge after working back through the contender’s bracket, besting the pair 21-13, 21-18 in the semifinals.

In the finals, Dalhausser/Lucena claimed their X AVP crown of the season with their fifth career win and second of the season over Brouwer/Meeuwsen. The Americans bested the Dutch duo at the Fort Lauderdale Major in March and fell to the pair in Vienna in August.

Dalhausser/Lucena topped Spain’s Adrian Gavira/Pablo Herrera and Norway’s World Tour Finals champions Anders Mol/Christian Sorum in the contender’s bracket to make the semifinals. The pair then blazed through Bourne/Crabb in the semis thanks to a .688 hitting effort, 12 kills, four aces and three blocks by Dalhausser and 12 kills on a .524 hitting effort, six digs and an ace by Lucena.

Brouwer downed 31 kills at a .531 clip and added eight digs in the final, while Meeuwsen added 11 kills, three block and an ace.

A new record for most serves in the freeze with 47 serves! Congrats to @PhilDalhausser & @NicklucenaFSU on taking down NED’s Brouwer/Meeuwsen, 21-16 & 27-25 and taking home the #AVP Hawaii Invitational trophy! #BeachMode
📸: @AGamePhoto pic.twitter.com/LNh53vSrLR