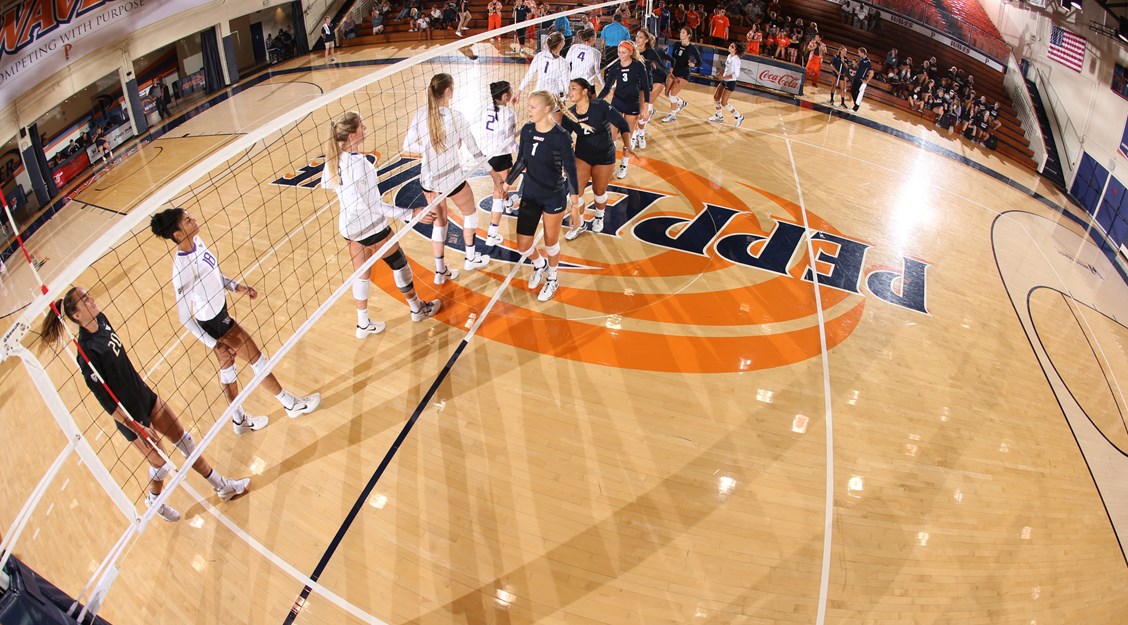 Home action begins on Friday in Firestone Fieldhouse, as the Pepperdine women's volleyball team hosts Idaho, North Texas and CSUN for the 21st-annual Asics Classic throughout the weekend. Current Photo via Pepperdine Athletics

MALIBU, Calif. — Home action begins on Friday in Firestone Fieldhouse, as the Pepperdine women’s volleyball team hosts Idaho, North Texas and CSUN for the 21st-annual Asics Classic throughout the weekend.

SPLASH ZONE — Pepperdine is introducing a new student fan-experience for all home volleyball matches with the Splash Zone.  The zone will be located behind the service line in between the lobby and court.  All Pepperdine students are able to stand-in and support the Waves’ teams in a rowdy new experience.  Anyone in the Splash Zone will also be first-eligible for that events giveaway.

RIPTIDE GIVEAWAY — The giveaway for the Friday and Saturday matches include an Amazon Firestick, Spikeball and Beats wireless headphones.  Students that come on Friday will be given one raffle ticket eligible for the giveaway on Saturday.  In addition, students that come on Saturday will get an additional ticket for the giveaway.  If a student comes on both days, he/she will get two tickets to be entered into the drawing.

CANNONS — Shannon Scully and Hannah Frohling lead the Waves with 4.60 and 3.11 kills/set respectively.  Scully has marked 46 kills on a .262 output along with three aces and 28 digs.  She has posted one double-double and three matches with double-figure kills.  Frohling has put in 28 kills on a .229 success rate, along with two aces, six digs and seven block assists.  Other heavy hitters for the Waves have been Rachel Ahrens and Heidi Dyer who have put up 2.78 and 2.40 kills/set respectively.

MALIBU ROOFING COMPANY — Tarah Wylie and Alli O’Harra have been the main managers in the Malibu Roofing Company, amassing 0.70 and 0.50 blocks/set respectively.  Wylie has tallied 2.20 kills/set on a .367 hitting percentage, as well as seven blocks including one solo rejection.  O’Harra has posted 1.90 kills/set on a .260 output, along with five blocks including one solo.  Rosie Ballo has also spent time in the middle this season, amassing 1.00 blocks/set for the Waves.

PLAYMAKERS — Blossom Sato is Pepperdine’s primary playmaker, ranking 8th nationally and 1st in the conference with 12.50 assists/set.  She has dished out 125 total assists this season thus far, while helping her team to 15.60 kills/set and a .273 success rate on the offensive.  She has also marked 0.30 kills/set and 2.60 digs/set.

DIGGERS — Hana Lishman has started in the libero position in all matches this season, totaling 45 digs for 4.50 digs/set. She has also added 10 assists for 1.00 assists/set and an ace for the Waves.  In her first match this season, she was solid in the back line with 26 digs, and in two matches this season she has marked double-figure digs.  Jaiden Farr and Madison Shields have also entered matches for defensive support, amassing 1.17 and 1.40 digs/set respectively

In the second match of the season, the Waves downed Butler in straight-sets, totaling 25-20, 25-17 and 25-18 final set scores.  The team produced 48 kills on a .340 success rate, along with five aces, 52 digs and 3.0 team blocks.  The Bulldogs posted 31 kills on a .158 clip, with three aces, 37 digs and 10.0 team blocks.  Hannah Frohling led Pepperdine with 14 kills on a .385 clip, while adding two aces.  Scully produced double-figure kills again with 11 smashes along with nine digs and one ace.  Rachel Ahrens and Alli O’Harra led the squad with two blocks apiece, while adding seven and eight kills respectively.  Sato marked 40 assists, seven digs and an ace and Lishman was good for 13 digs.

In the third and final match of the weekend in Pittsburgh, the Waves fell in three sets to #20 Pitt with 25-23, 25-20 and 25-13 final set scores.  The Waves tallied 38 smashes on a .183 clip, with one ace, 30 digs and 4.0 team blocks.  The Panthers were good for 42 kills on a .364 success rate, along with three aces, 43 digs and 11.0 team blocks. Scully and Ahrens led the team with 11 kills.  Scully produced an ace, nine digs and 17 successful reception attempts with no errors and Ahrens added a .381 hitting percentage, with nine digs and 11 successful service receptions.  Frohling led at the net with three blocks and added eight kills.  Sato posted 30 assists.

ASICS CLASSIC — This year marks the 21st season that Pepperdine has hosted the Asics Classic, beginning the tradition with the inaugural tournament in 1997.  The Waves went 23-6 that year, starting out with three-straight wins at the Classic against Fresno State (3-2), Tulane (3-1) and Northern Arizona (3-2).  In the 20-season span of the tournament, the Waves have tallied a 44-15 record against opponents and have gone undefeated on five separate occasions including most recently in the 2015 season.

THE COMPETITION — The Waves will take on Idaho, North Texas and CSUN this week for the Asics Classic.  Idaho holds a 2-0 record against the Waves all-time, dating back to the 1983 season when the opposition won in four sets.  The teams faced again in 2014 with the same result.  This season, the Vandals have posted a 2-1 overall record with wins over Grand Canyon, Santa Clara and a five-set loss to New Mexico.  The team produces 13.8 kills/set on a .275 hitting percentage, along with 13.0 assists/set, 1.08 aces/set, 14.7 digs/set and 2.92 blocks/set.

The match this weekend will be the first time Pepperdine and North Texas have faced all-time.  This season, Mean Green has gone undefeated with three wins thus far, defeating Nicholls, Northeastern and Kent State by straight-set decisions.  The team puts out 14.00 kills/set on a .436 hitting percentage, along with 12.89 assists/set, 2.22 aces/set, 7.89 digs/set and 2.67 blocks/set.