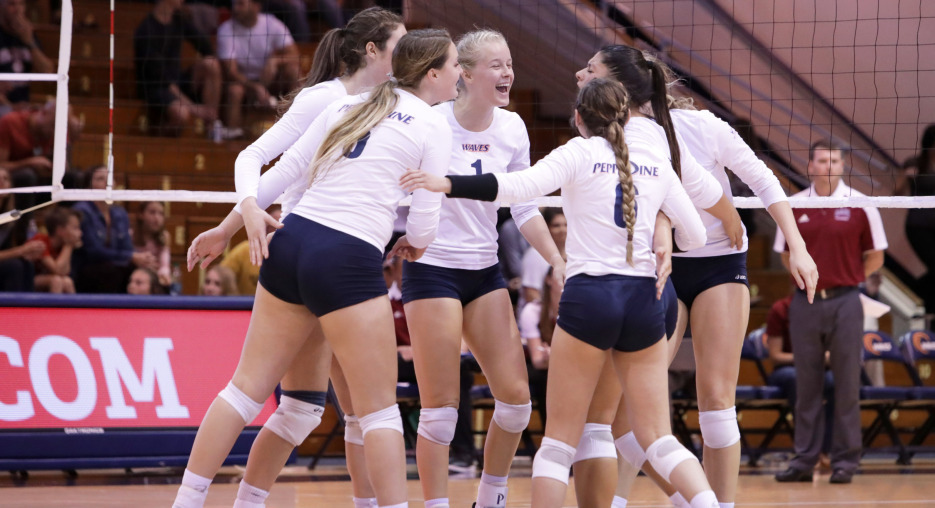 Pepperdine will play eight matches against six teams that made the NCAA Championships in 2017, including a pair of West Coast Conference teams twice, as well as 13 home matches.  Current Photo via Pepperdine Athletics

MALIBU, Calif. – The 2018 Pepperdine women’s volleyball schedule was released by Head Coach Scott Wong on Monday morning, with strong competition on the docket for the upcoming season.

“The non-conference schedule that we put together is a great blend of quality volleyball opponents,” said Wong.  “There is a decent amount of travel that will prepare us well for our conference season.”

Of the 29 matches scheduled, 13 will be played in Firestone Fieldhouse including the annual 21st annual Pepperdine Asics Classic from August 31 to September 2.  All home matches will be available to watch online for free as WaveCasts will air on TheW.tv.

Pepperdine will play eight matches against six teams that made the NCAA Championships in 2017, including a pair of West Coast Conference teams twice.  BYU went the furthest for the conference with a Sweet 16 appearance, while San Diego made it to the second round.  Also among the 2017 NCAA Tournament participants that the Waves will face this season are Cal Poly and Pitt (second round appearances) and Missouri State and Hawai’i (first round appearances).

The Waves will open the season in Pittsburgh, Pennsylvania at the Panther Challenge from August 24-25, playing Cal Poly, Butler and tournament-host Pitt in the first tournament of the season.  This is the second-straight season the team will begin on the road.

The Pepperdine Asics Classic has been in existence since 1998.  In the previous 20 tournaments, the Waves have amassed 45 wins, with only 14 losses including last season’s 2-1 output.  This season, Pepperdine will welcome Idaho, North Texas and CSUN to Malibu for the tournament.

After the Classic, the team will head to College Station, Texas to compete in the Texas A&M Invitational from September 6-7.  Along with the Aggies, Missouri State and Nicholls State will also be in attendance.

Directly after the tournament-push, the Waves will only have two non-West Coast Conference matches left in the season.  On September 12, the team will head to Irvine to challenge UC Irvine and late in the season, Pepperdine will host Hawai’i on November 6.