Perfect No More: No. 2 BYU Falls in Regular Season Finale at Loyola Marymount 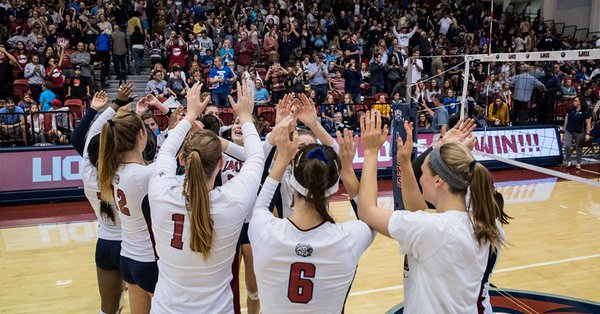 BOX SCORE NOTES
Senior Sara Kovac led all players with 22 kills on 45 swings … she also added 10 digs for a double-double … Tess Reid dished out 48 assists as LMU hit .252 as a team … Reid also had a 10 digs to record a double-double of her own … Senior Kekai Whitford led the way with a game-high 19 digs from the libero position … LMU held BYU to just .158 on their attack … Roni Jones-Perry totaled 20 kills on 49 attacks for the Cougars … Lyndsey Haddock-Eppich led BYU with 10 digs … LMU recorded 52 kills as a team, and allowed just 36 … All 52 kills had assists for the Lions … BYU’s strength was at the net recording 13.0 blocks compared to four by the Lions … The match featured 29 tie scores and 11 lead changes in the game, including 19 lead changes in the second set alone.

How was that for a Senior Night victory!? The Cougars are undefeated no more. What a win!#LMULionsWVB🏐 pic.twitter.com/mRDW8oMP2P

QUOTABLE
“The crowd was unbelievable,” said Head Coach Aaron Mansfield. “Obviously there were a lot of BYU fans, but there were a lot of LMU fans here too, and the girls definitely fed of that. Our preparation is our preparation. We prepared for the match just like we did all the others and a lot of things went our way tonight. Obviously, BYU is undefeated for a reason and they make it really tough on you, but we felt like we earned it tonight. I’m really proud of our team, especially for Kekai and Kovac’s last match at Gersten. I couldn’t be prouder of that. It was really a team effort tonight. Everyone stepped and played really good volleyball. Nothing special, but it was good enough to win.”

“I’m proud of the regular season we’ve had,” BYU head coach Heather Olmstead said. “Nobody can take away what we’ve done this season and that it’s been something special. We didn’t play our best tonight so that means there’s room for us to grow and get better.”

BYU held the lead for most of the first set, scoring the first four points before eventually pulling ahead by as many as five points at 13-8 after a block by Haddock-Eppich and Gneiting. Jones-Perry and Sara Kovac of LMU exchanged attacks until finally the Lions tied the game at 22-22. LMU would score three of the last four points to take the set.

From LMU’s 3-2 lead on, neither team held more than a one-point lead the entire second set. Jones-Perry had 11 kills in the set and the Cougars staved off two set points but ultimately fell, 27-25.

In the third set the two teams again battled close until a 17-16 BYU lead turned into a 22-17 margin in favor of LMU. The Lions then held off BYU for the 25-20 victory.

BYU will next play on Friday, Nov. 30, in the NCAA Tournament. Details will be announced after the selection show Sunday night.