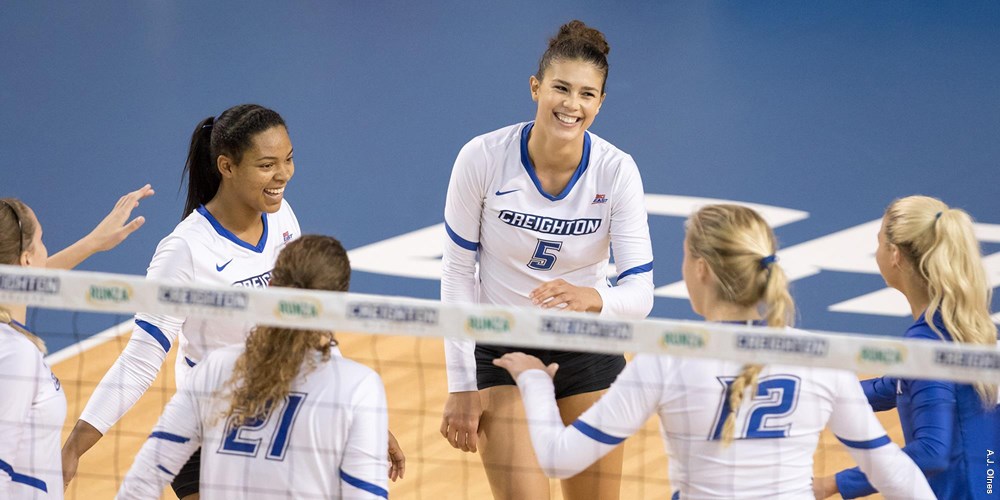 Creighton senior Jaali Winters was named BIG EAST Player of the Year for the second major award of her career. St. John’s junior Amanda Sanabia was named Libero of the Year, while teammate Efrosini Alexakou received the Freshman of the Year award. Current Photo via Courtesy: Creighton Athletics

NEW YORK – The annual BIG EAST Volleyball major awards and All-Conference teams have been announced for the 2018 season on Wednesday. The BIG EAST Volleyball Championship presented by Jeep begins on Friday at Creighton’s D.J. Sokol Arena. St. John’s earned three of the top four awards for the season, including Libero of the Year, Freshman of the Year and Coaching Staff of the Year.

Creighton senior Jaali Winters was named BIG EAST Player of the Year for the second major award of her career. St. John’s junior Amanda Sanabia was named Libero of the Year, which is the first time for the Red Storm since Lena Yee won the accolade three years in a row from 2006–08. The Freshman of the Year award was secured by Efrosini Alexakou, the second St. John’s rookie to collect the honor in three years.

An all-conference first and second team was also released along with the major awards, which comprised of seven unanimous selections. The top three teams in the conference, Creighton, Marquette and St. John’s all had three first team players on the list. Butler, Georgetown and Seton Hall secured the other three spots on the 12-player first team. All but two of the 10 BIG EAST schools had a player on the first or second team.

Jaali Winters was selected BIG EAST Player of the Year as she guided the Bluejays to a record fifth consecutive outright regular-season title, along with a sixth straight appearance in the BIG EAST Volleyball Championship. Creighton will be the No. 1 seed as they take on No. 4 seed Villanova in the second semifinal on Friday in Omaha, Neb. The Bluejays will seek their fifth tournament title in a row.

Winters was a unanimous selection to the all-conference first team as she collected two BIG EAST Offensive Player of the Week awards and one Defensive Player of the Week honor this season. Offensively, she averaged 3.80 kills and 4.28 points per set in conference play, which were both third-best in the league. On the defensive side, the senior outside hitter averaged 2.99 digs per set and helped hold conference opponents to a league-best .155 hitting. She became the second player from Creighton in three years to be awarded Player of the Year as Lydia Dimke earned the top honor in 2016. Winters was named Freshman of the Year in 2015 and has been named to the all-conference first team all four years of her career from 2015-18.

Sanabia and Alexakou secured Libero of the Year and Freshman of the Year accolades, respectively, after helping St. Jonh’s move up to their best conference finish since they were second in 2008. This is the first time in the BIG EAST’s current format that the Red Storm will play in the conference tournament. Sanabia averaged 5.22 digs per set, which was second-highest in the league overall, and is seventh in the NCAA with 660 total digs. This season she garnered three BIG EAST Defensive Player of the Week awards. Alexakou, who was BIG EAST Freshman of the Week three times this season, averaged 3.67 kills and 4.00 points per set, which were both tops for a freshman in the BIG EAST and fifth overall this year. St. John’s opponents hit just .185, which was tied for third-best in the conference. Nationally, the Red Storm rank sixth in total team assists with 1, 605, eighth in total team kills (1, 689) and 10th in total team service aces (193).

The Red Storm clinched the No. 3 seed in this week’s BIG EAST Volleyball Championship presented by Jeep. It is St. John’s first appearance in the tournament since 2012. For their efforts this season, St. John’s, led by head coach Joanne Persico earned the 2018 BIG EAST Coaching Staff of the Year honors. Also on the Red Storm bench is associate head coach Mario Treibit and assistant coach Bryan Weber. Persico won BIG EAST Coach of the Year in 2006. Persico is completing her 25th season at St. John’s as the original head coach for the volleyball program and is the longest tenured female head coach in Red Storm history. 2018 was Persico’s 10th 20-win season.

Nationally-ranked Creighton boasts another unanimous selection in Taryn Kloth. She was second in the conference in both kills and points per set this season, averaging 4.02 and 4.54, respectively. Kloth was also named BIG EAST Offensive Player of the Week twice this year. Also on the first team for Creighton is Madelyn Cole who leads the league in assists per set with 10.77, and she is second in the BIG EAST in service aces, averaging 0.50 per set.

St. John’s Erica Di Maulo is also on the first team, garnering a unanimous selection. She averaged 10.38 assists per set, which was second-most in the league this season, and is 10th in the nation with 1, 301 total assists. Di Maulo was BIG EAST Co-Freshman of the Year in 2016.

Marquette, the two-seed in the BIG EAST Volleyball Championship, moved up to a program-best AVCA Coaches Poll ranking, coming in at No. 16 this week. The Golden Eagles claim three spots on the all-conference first team. Last year’s Player of the Year, Allie Barber, was a unanimous pick, along with teammate Jenna Rosenthal. Anna Haak is the third Golden Eagle on the first team. Barber leads the league in kills (4.74) and points (4.96) per set. She is also second on the BIG EAST’s hitting percentage list at .375, while Rosenthal leads the category at a .434 clip. As a team, Marquette leads the league in three categories which include assists (14.17), hitting percentage (.319) and kills (15.38). The Golden Eagles are fourth in the country in aces per set, fifth in assists and kills per set and eighth in hitting percentage.

Villanova picked up two second team players in three-time Freshman of the Week Clare Delaplane and Regan Lough who leads the league in digs per set with 5.35. The Wildcats are the No. 4 seed in the 2018 BIG EAST Volleyball Championship. Creighton adds Megan Ballenger to the second team, along with Martha Konovodoff who was named BIG EAST Defensive Player of the Week three times this year. Georgetown’s Alyssa Sinnette and Providence’s Allison Impellizeri were also both selected to the six-player second team.

The All-BIG EAST teams and major awards were voted on by the league’s 10 head coaches. The coaches could not cast ballots for their own team or players.

BIG EAST Player of the Year

BIG EAST Libero of the Year

BIG EAST Freshman of the Year