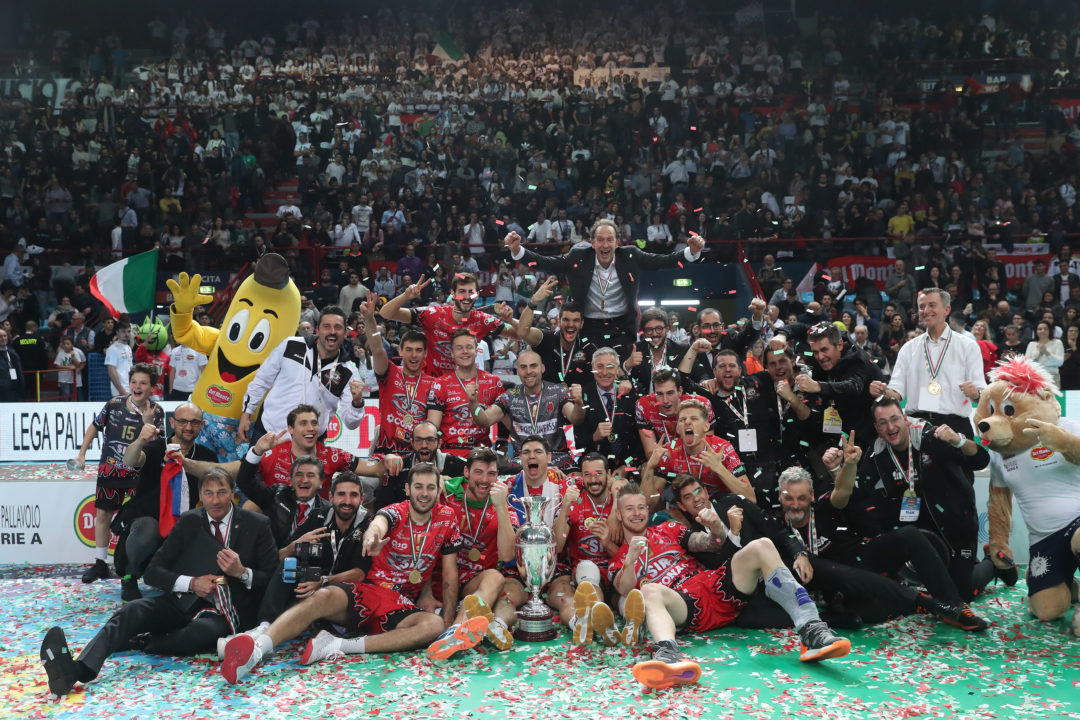 Perugia gets their first Italian Cup in club history with a passionate 3-1 win over Lube Civitanova.  Current Photo via legavolley.it

Winning a championship is an incredible moment for any team, and for the fans who made the 6-hour trek from Perugia to Bari to watch their team win their first-ever Italian Cup, the moment was especially memorable. The die-hard fanbase of the “Blockdevils”, as Perugia is affectionately referred to as, have endured heartbreaking final four losses in 3 out of the last 4 seasons. They had their moment of redemption on Sunday morning with an emotional 3-1 victory over Lube Civitanova. Earlier this year, Perugia also won its first Super Cup, setting it up for a domestic treble later this season.

If you had quit watching after the first set, you would have assumed that Civitanova was a pro team playing against high schoolers. They set up a wall against the Perugia attack, scoring on a block 4 times and limiting Perugia to just 44% kill efficiency leading to a 25-16 Lube win in the first set. It wasn’t long before Lorenzo Bernardi had his team roaring back, however, and Perugia led for the majority of the second set to come out with a 25-22 win.

The intensity of the match crescendoed until it reached an apex in the third set when opposites Aleksander Atanasijevic and Tsvetan Sokolov both received red cards for jawing at each other through the net. The encounter represented the time in the match where the momentum finally started to shift in Perugia’s favour. From that point on, the passionate Serbian Atanasijevic led the team to an almost flawless finish, scoring on 17 of 22 of their attacks in the fourth and final set.

The last point of the match stood out in particular as Jenia Grebbenikov barely missed a pancake dig that would have kept the deciding rally alive in a favourable position for Lube. It was a good analogy for Civitanova’s performance today, coming up just short of their usual impeccable caliber of play.

For all the middles reading this article, if you want an example of how to perform a the highest levels of your position, look no further than this match. Marko Podrascanin and Simone Anzani played nearly flawless games on both offense and defense. The pair scored on an unprecedented 17 of 19 hits for an 89% kill efficiency to go along with 6 blocks and an ace. They were going up against tough opposition too; Davide Candellaro, Dragan Stankovic, and Enrico Cester are an elite trio of intelligent and experienced blockers. But setter Luciano De Cecco gave the middles from Perugia plenty of opportunities, and they took full advantage of them.

Separating yourself from the pack in a league as competitive as the SuperLega can be a tough feat, but with the best record in the league and an Italian cup win under their belts, Perugia may have done just that. A team that thrives on frenzied moments and passionate focus, they have already cemented themselves in the record books of Italian volleyball. With the Italian Cup under their belt, they look towards the Champion’s League with renewed confidence, perhaps representing the best threat to take out Zenit Kazan, the Goliath of men’s club volleyball.