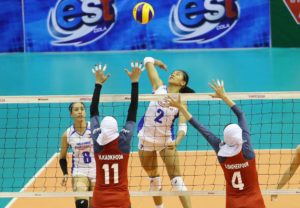 Six teams will participate in the inaugural Philippines’ Collegiate Grand Slam. Starting on November 3, the tournament will pit all teams against each other in a single round robin, with the top two teams fighting for gold in a finals match.

According to PSL president Ian Laurel, the winning team will probably be sent to training in Thailand (Spin.ph):

“These teams are preparing for this big tournament, so we will give incentives for them during their training camp. Most likely it will be a trip to Thailand for seven to ten days, and this will be awarded to the winner. There is always a good fight when the incentives are good.”

As was expected, all coaches were thrilled with the news:

“We take this as a blessing, a great blessing for the players, a good chance. We expect a lot of competition, and this kind of training abroad will definitely rase the players’ level.” -FEU head coach Rey Diaz

The initiative is indeed to be celebrated. Philippines is a volleyball crazy country and its players deserve every chance possible to further develop their game. Currently, competition inside the country is still weak, so exposing top players to other volleyball markets will most surely help them. However, for a maximum effect, this exposition needs to systematically done, not just a one time thing. Maybe it’s also time to think about sending some players to soem mid-tier leagues abroad as well.