Plummer Just Misses Triple-Double as No. 2 Stanford Bests No. 18 UCLA 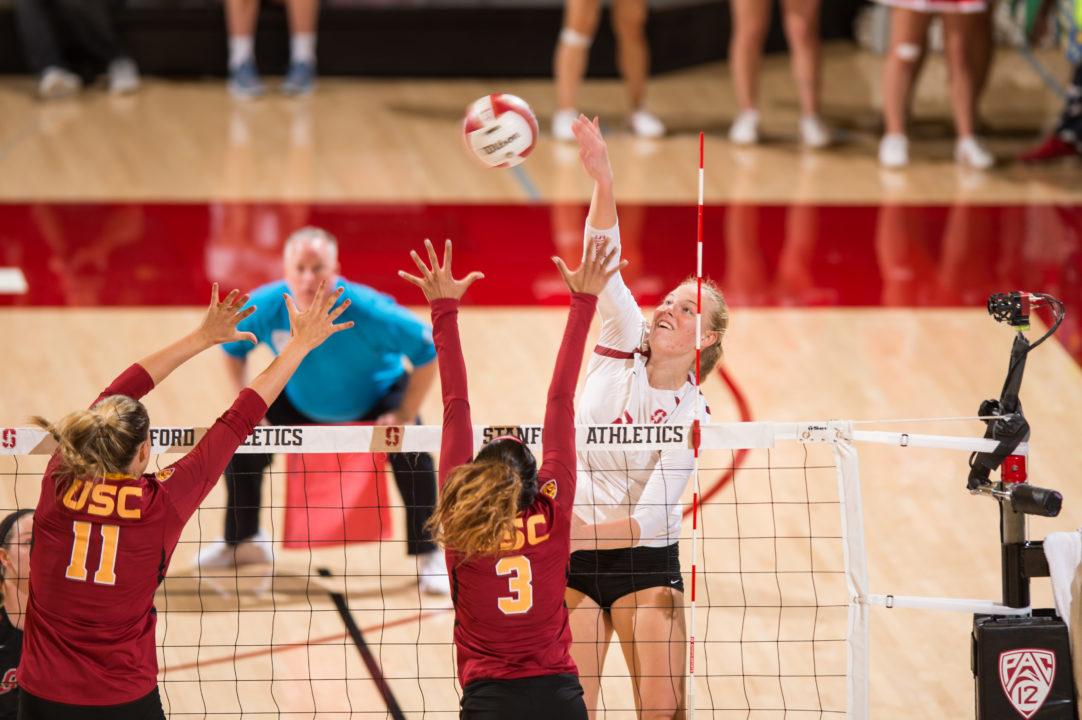 Sophomore outside hitter Kathryn Plummer just missed a triple-double, downing 21 kills, notching 10 digs and serving up eight aces to lift No. 3 Stanford to a road win over No. 18 UCLA.  Archive Photo via Stanford Athletics

LOS ANGELES – Sophomore outside hitter Kathryn Plummer just missed a triple-double, downing 21 kills, notching 10 digs and serving up eight aces to lift No. 3 Stanford to a road win over No. 18 UCLA.

With the teams tied at 7-all in Set 1, Stanford pulled away with a 7-2 run, including three Plummer putaways. UCLA cut the margin to one at 17-16 and again at 19-18 as the Cardinal committed five miscues. A trio of Bruin errors led a final 6-2 Stanford run capped by a pair of Plummer kills to wrap up the 25-21 win.

UCLA ran out to an 11-5 lead in Set 2 with help from three kills and a block by Buechler. Stanford narrowed the gap to two at 12-10 with two kills and a block by Plummer, but the Bruins answered with a 5-1 run including back-to-back aces by Kyra Rogers. Up just two again at 18-16, UCLA again answered the call with a 5-1 run, with two Mosser putaways. Stanford scored four of the next five, but the Bruins grabbed the win on two Cardinal miscues.

The Bruins took an early 8-4 lead in Set 3 and carried it on to a 13-9 advantage. Stanford countered with eight of the next 10 points, beginning with a 5-0 run, to vault ahead 17-15. Plummer served up three aces and Hentz added one in the stretch. UCLA was back on top at 18-17 and 21-20, but Stanford stole away the win with five of the final seven points. Alade, Lutz and McClure notched kills in the final stretch.

The teams split the opening 16 points of Set 4, before UCLA squeaked ahead 14-11 with two kills each by Rogers and Mosser. Stanford scored six straight and eight of the next nine to go up by four at 19-15. Lutz notched three kills and a block in the stretch. The teams traded points leading to a 22-18 score. Two Plummer kills and one by Alade sealed the 25-18 win and the match.

UCLA led from start to finish in set two to even things up at intermission. The Bruins scored four of the first five on kills by Buechler and May, a Rogers ace and a Stanford attack error. UCLA’s largest lead of the set was six on numerous occasions, the first of which came at 11-5. The Cardinal trimmed things to two at 12-10, but a 5-1 run for UCLA on two Rogers aces and a combo block with Mosser, a May kill and a Stanford error made it 17-11. At 23-20, a Cardinal service error and attack error closed out a 25-20 UCLA win. Mosser was error-free with four kills in six attempts, while Buechler added three kills. Sponcil posted seven digs and Simo had five, as the Bruins out-hit the Cardinal .147 to .054.

Set three had eight ties and five lead changes. The Bruins jumped out to an 8-4 lead on kills by Gates, Mosser and Rogers, a Gates/Buechler block and four Stanford errors. UCLA still led by four as late as 13-9 before the Cardinal scored five straight to go up 14-13. The Bruins would re-take the lead at 18-17, and still led by one as late as 21-20, but Stanford scored five of the last seven of the third to win it 25-23. May and Mosser each had three kills, while Buechler added six digs, as the Bruins were out-hit .216 to .172.

Set four featured six ties and three lead changes. UCLA scored the first three on kills by Buechler and Rogers and a Stanford error. Trailing 8-7, a 5-1 Bruin run on two Mosser kills, one each by Buechler and Rogers and a Stanford attack error made it 12-9 in favor of the home team. At 14-11 UCLA, the Cardinal scored six in a row to take the lead for good, as the visitors won the set 25-18. Buechler was error-free with six kills in 13 swings, while Rogers was 4-for-5 with no miscues. Simo added five digs and Mosser posted four, as the Bruins were out-hit .452 to .273.

The Bruins host California on Saturday at 6 p.m. at Pauley Pavilion. The match will feature live TV on Pac-12 Networks Bay Area and free audio on UCLABruins.com.