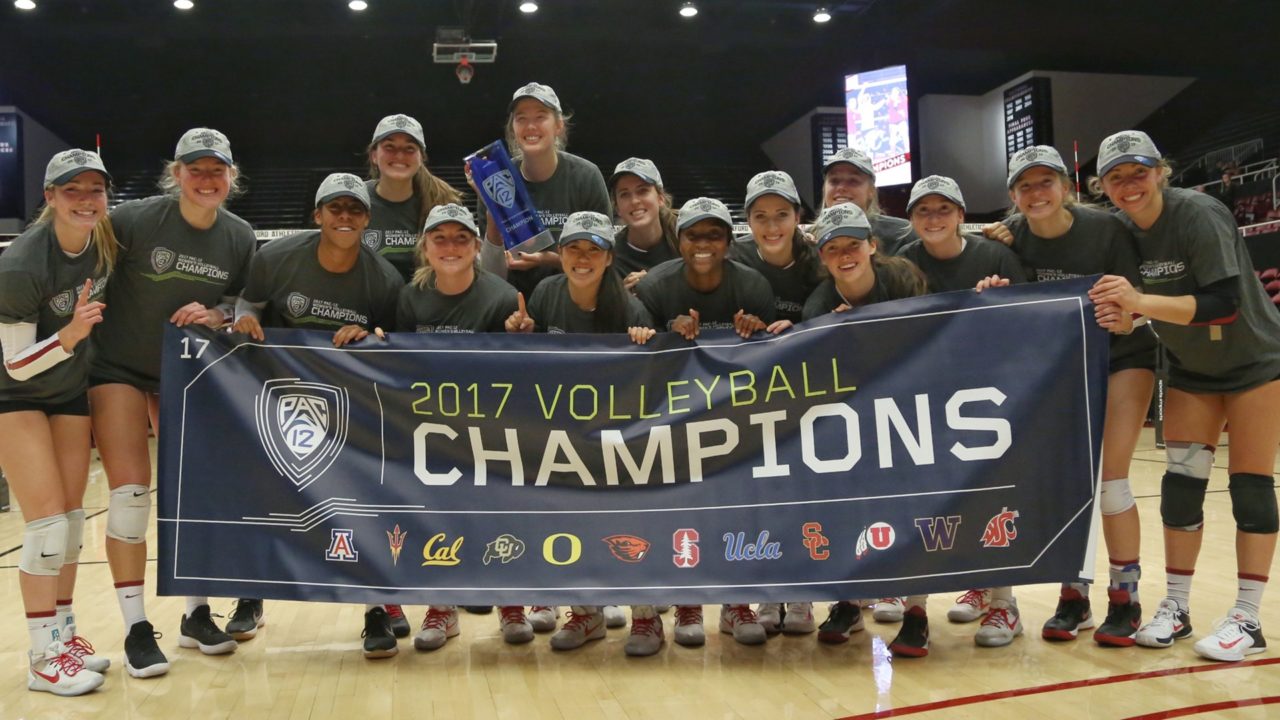 #3 Stanford survived a valiant effort from #20 UCLA in their five-set comeback victory to remain perfect at home. Current Photo via Stanford Athletics

Six of Plummer’s career-high 28 kills and 3 of her 4 blocks came in set 5, while Lutz added 2 of her career-high 21 kills in set 5. In all, the duo were responsible for 56 of Stanford’s 91 points scored in the match (62%). Plummer hit .323 and added 5 digs and an ace. Lutz also added 4 blocks and hit .476 on the night. Setter Jenna Gray brought a double-double to the match, dishing out 63 assists and adding 12 digs to the defense. She was also stalwart at the net, blocking 7 balls. Libero Morgan Hentz scooped 24 digs, passing 1,000 digs for her career. She is the 18th Cardinal since 1986 to move into four-digit territory in digs. Meghan McClure dug a career-high 17 balls to go with her 8 kills. Tami Alade and Audriana Fitzmorris both finished with a match-high 8 blocks. Blocking was the key in this match, with Stanford blocking a season-high 17 Bruin attacks, while UCLA only blocked 3 on the night.

UCLA had multiple high-level performers in their hard-fought effort. Madeline Gates pounded a career-best 22 kills and hit .462 against the Cardinal. Senior Reily Buechler also led the Bruin attack with 22 kills and added 13 digs. Freshman Jenny Mosser added 19 kills to the offense. Junior libero Zana Muno was the floor general for the Bruins, leading the team with 23 digs. Senior setter Sarah Sponcil had UCLA’s only other double-double (aside from Buechler) with 61 assists and 22 digs.

STANFORD, Calif. – Career-highs by Kathryn Plummer and Merete Lutz fueled No. 4 Stanford women’s volleyball in a come-from-behind five-set thriller over No. 18 UCLA, Thursday, at Maples Pavilion.

Sophomore libero Morgan Hentz racked-up a season-high 24 digs, which included the 1,000th of her career. She became the 18th Cardinal player since 1986 to achieve that milestone.

Sophomore setter Jenna Gray finished one assist shy of her career-high, totaling 63 and 12 digs for her third double-double of the season. The Shawnee, Kansas native also posted seven blocks as the Cardinal tallied a season-high 17.0 blocks as a team.

Junior Tami Alade notched eight blocks, including on consecutive plays to give Stanford a 13-10 edge in the decisive fifth set. Sophomore Audriana Fitzmorris also recorded eight blocks for the Cardinal.

The Bruins (16-10, 9-8 Pac-12) held an early lead in the match, scoring the first three points on kills by Buechler and May and a Stanford attack error. With UCLA still up by one at 6-5, the Cardinal scored the next six and led for the balance of the set. Stanford’s lead for the rest of the set remained between four and seven, as the home team won the opener by a score of 25-19. Buechler paced the Bruins with seven kills to go with four digs, Mosser added four kills and Gates had three kills and no errors in seven attempts. Sponcil produced eight digs to go with her 15 assists, while Muno added seven digs. The Bruins were out-hit .267 to .250.

UCLA again took an early lead in the second, going up 7-4 on two kills each by Buechler and Gates, a Rogers ace and two Stanford errors. The Cardinal (24-3, 17-1) recorded the next four to go up 8-7, but four in a row by the Bruins on kills by Mosser, May and Muno and a Sponcil ace put the Bruins back up by three. Despite four more ties, UCLA didn’t trail for the rest of the set. At 13-all, a Cardinal service error and back-to-back-to-back Gates kills made it 17-13. Even at 21, two Buechler kills and a Stanford attack error gave the Bruins three set points. Stanford saved the first two, but Gates’ team-best eighth kill of the second gave the Bruins a 25-23 win. Buechler added five kills and Mosser posted three. Muno and Simo each had four digs. The Bruins were out-hit .406 to .316.

The Bruins never trailed in set three to go up 2-1 in the match. UCLA scored seven of the first nine on two Gates kills, a Buechler kill and ace and three Stanford errors. At 11-7, a May kill and a Gates solo block gave the Bruins a six-point edge, a set best for the visitors. The Cardinal would come back to even the score at 18 and 19, but two straight errors and a Buechler kill gave the Bruins a 22-19 lead. After a sideout, a Buechler kill and back-to-back Mosser kills wrapped up a 25-20 win. Mosser led the way with six kills, Gates added four and Buechler had three. Muno and Sponcil both had four digs. The Bruins out-hit the Cardinal .387 to .206.

Down a pair at 10-8 in the fourth, the Bruins scored five in a row on a Gates kill and solo stuff, a Buechler kill and two Stanford errors to go up by a set-best three at 13-10. Even at 15, two Mosser kills and one by Rogers as part of a 3-1 run put the Bruins up by two at 18-16, but Stanford closed the set on a 9-3 run to take the fourth 25-21. Buechler, Gates and Mosser all had four kills in the fourth, Sponcil and Muno both posted seven digs and Buechler added five digs, as the Bruins were out-hit .250 to .143.

UCLA led by as much as two in the fifth at 5-3 after recording three Buechler kills, one from Gates and a Stanford attack error. Trailing 7-6, the Bruins scored three in a row on a Mosser kill, a Stanford error and a Buechler/Rogers block to take a 9-7 edge. However, the Cardinal would net three in a row and six of the next seven to go up 13-10. UCLA saved a pair of Stanford match points on a Cardinal service error and a Gates kill, but the home team prevailed 15-13 in the fifth. Buechler and Gates each had three kills in the fifth. The Bruins were out-hit .421 to .278.