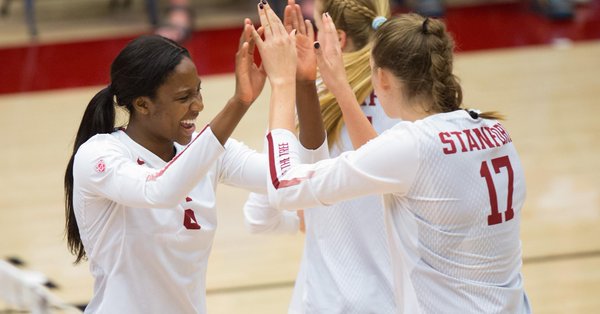 TUCSON, Ariz. – Stanford kept its stranglehold on the top spot in the Pac-12 with their 14th straight win and 12th in conference play, with a road sweep of Arizona.

Junior outside Kendra Dahlke was tops among the Wildcats with 13 kills and eight digs, while junior outside Tyler Spriggs was next on the team with six putaways. Freshhman outside Katie Smoot accounted for two blocks, while sophomore libero Makenna Martin and Smoot registered six digs apiece.

Arizona scored the four of the first five points of the match on kills by Candice Denny and Dahlke, but Stanford grabbed the lead at 6-4 with three Plummer putaways and an ace by McClure. The Wildcats tied it up at 10, 11 and 12, but the Cardinal pulled away with seven straight points, including four more Plummer kills. Kills by Shardonee Hayes and Smoot stopped Stanford momentarily, but the Cardinal rebounded by rolling to the 25-15 win with a 6-1 run. Lutz tallied three kills in the final stretch, while Plummer clinched the win with an ace.

Stanford seized the early advantage in Set 2, going up 8-4 with help from four Wildcat errors and a block by Audriana Fitzmorris and Lutz. Arizona scored four of the next six, three on Smoot kills, to make it 10-8. The Cardinal answered with eight of the next 10, including two blocks by Jenna Gray and two Alade putaways. Down 18-10, the Wildcats cut the margin to six at 19-13 with a trio of Stanford errors. Stanford wrapped up the win with a 6-3 run, including kills by four different players,t he last by McClure.

Three Spriggs kills and two by Dahlke gave Arizona a 5-3 lead to start Set 3. The teams traded points over the next 12 serves, leading to an 11-9 Wildcat lead. Two Plummer kills and a kill and block by Alade gave Stanford a 13-12 edge. The teams tied four times, before a Dahlke ace put Arizona on top 17-16. The Cardinal led briefly at 19-18, but the Wildcats led 21-20 shortly thereafter with kills by Dahlke and Spriggs. Stanford earned its first match-point try at 24-21 with a 4-0 run, including two Lutz kills and an ace by Hentz. A solo block by Shardonee Hayes and a Smoot putaway kept the match going. A Wildcat hitting error ended the night at 25-23 Stanford.

Plummer tallied a match-high 15 kills on .538 hitting and finished one dig shy of a double-double. Lutz added 11 kills on .391 hitting and four blocks.

The Cardinal opened the match slowly, but a 7-0 run sparked by Sidney Wilson’s presence at the service line gave Stanford a 19-12 advantage. Plummer closed out the set with an ace, marking the 19th time this season the Cardinal has won the opening set.

Stanford’s block came alive in the second set, propelling the Cardinal to a 2-0 lead over the Wildcats. Fitzmorris tallied three in the set, while Gray and Alade notched two apiece.

Redshirt sophomore Courtney Bowen came off the bench in the second and registered her first block and kill of the season.

The third set remained close throughout, but late kills by Lutz and Fitzmorris helped seal the win for Stanford.

Kendra Dahlke led Arizona with 13 kills and eight digs. Tyler Spriggs came off the bench to record six kills and a solo block for the Wildcats.

Stanford returns to The Farm next week to host Oregon State on Friday and No. 15 Oregon on Sunday.

Arizona volleyball was swept by second-ranked Stanford (25-15, 25-16, 25-23) on Sunday afternoon in McKale Center. Kendra Dahlkehad a team-high 13 kills in the loss.

“I was disappointed,” said head coach Dave Rubio. “It’s the first time all season I felt like we were a victim of playing the team across the net. Whether or not that was the reason, I don’t know but it certainly appeared that way.”

Stanford, unbeaten in league play this season (12-0), hit .382 in the match while holding UA to a .125 clip. That’s par for the course for the Pac-12’s leader in both hitting percentage and opponent hitting percentage.

“I think our mindset, just preparing through this week and the games this weekend, is probably going to be the biggest thing that will get us through those games,” said Dahlke of the upcoming roadtrip. “Just having the right mindset is super important, so I think that will help us a lot.”

Stanford scored 13 of the final 16 points of the first set after the Wildcats had tied things up at 12. The Cardinal hit .469 in the set; Kathryn Plummer had nine kills on 12 swings.

Stanford carried that momentum into the second set, winning the frame 25-16.

Arizona hung tough in the third, but the Cardinal took the frame, 25-23 to sweep the match.

Up Next: Arizona heads to Los Angeles to take on UCLA (Friday) and USC (Sunday) next week.