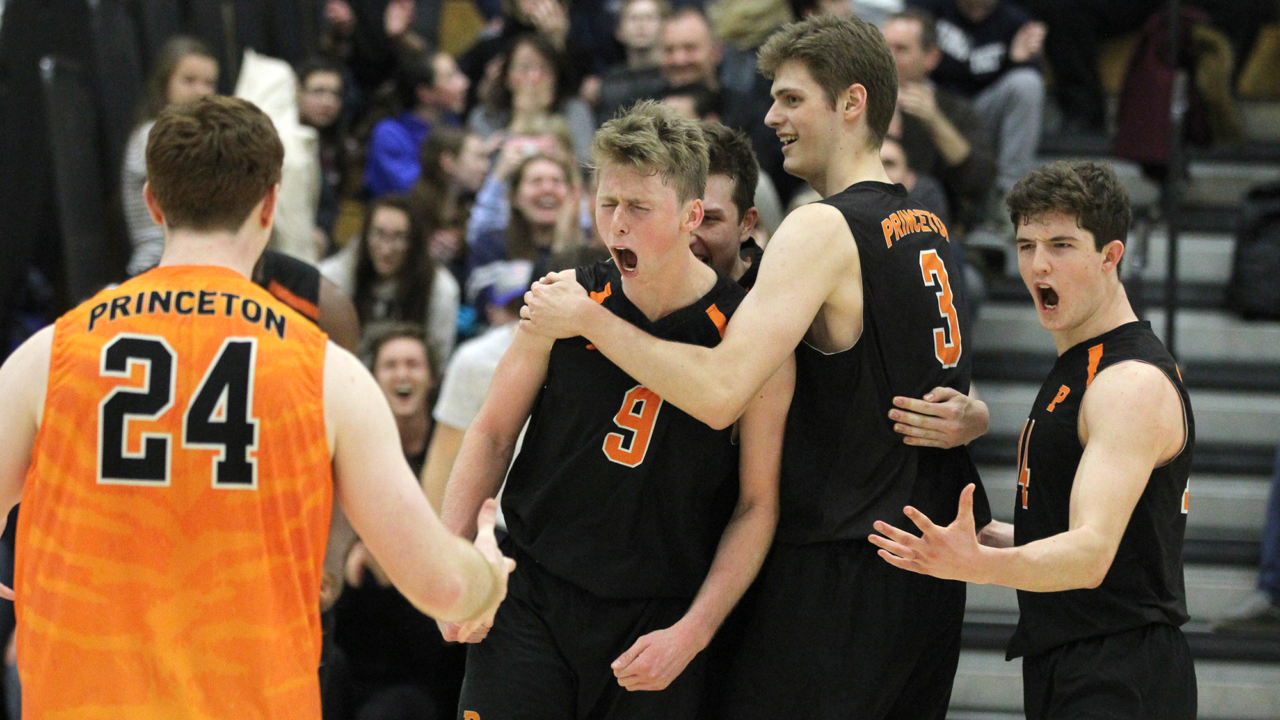 PRINCETON, N.J. – When things looked bleak, Princeton dug deep and persevered through eight match-point attempts in Set 4, en route to a huge five-set up upset of No. 11 Penn State on Saturday.

Trailing 20-14 in Set 4, Princeton fought their way back to within one at 21-20 as sophomore outside Greg Luck downed two kills and sophomore middle George Huhmann added a kill and an ace. Penn State scored three of the next four, including two kills by redshirt sophomore opposite Calvin Mende, to earn a match-point try at 24-21. A service error, a hitting error and a stuff by Luck and senior middle Trey Sickler fought off all three attempts to tie it up at 24. The teams traded points over the next 10 points, with the Tigers answering the call as the team faced five more PSU match-point chances. A putaway by senior middle Junior Oboh leveled the score at 29 and Huhmann and Luck followed to steal away the 31-29 victory.

The Tigers carried the momentum into the decisive fifth set, cruising to a 6-2 advantage. Huhmann led the way with two kills and a block and Princeton capitalized on two PSU hitting errors. Princeton raised its lead to five at 10-5 with help from a pair of Nittany Lion service errors. Penn State called timeout and scored six of the next eight out of the break to narrow the gap to one at 12-11. Redshirt senior outside hitter Aidan Albrecht and redshirt senior opposite Jalen Penrose turned in two kills each in the PSU rally. A service error and hitting error put Princeton on the hill at 14-11. A Mende putaway and solo stuff by redshirt senior middle Kevin Gear kept the Nittany Lions in the game. Princeton called timeout and Huhmann delivered his 24th kill to close out the unlikely victory.

“I couldn’t be more thrilled for the guys and the way they battled tonight,” head coach Sam Schweisky said. “This was a great night for Princeton Volleyball. We celebrated a championship team, and then we played like a championship team. We know we have a long way to go this season, but the guys should see now just how strong we can be this season. And to do it in an environment like Dillon Gym tonight, with great fans and President Eisgruber in attendance, it just shows great composure and competitiveness from our guys.”

Redshirt junior outside Matthew McLaren posted 22 kills to lead the Nittany Lions, while Albrecht (18) and Mende (13) followed. Gear added nine kills and seven blocks, while hitting at a team-best .350 clip. McLaren and Albrecht each served up two aces, while Mende added five blocks.

Appropriately, if not significantly, the 1998 EIVA Championship team, which made the NCAA Final Four, was honored at the match.