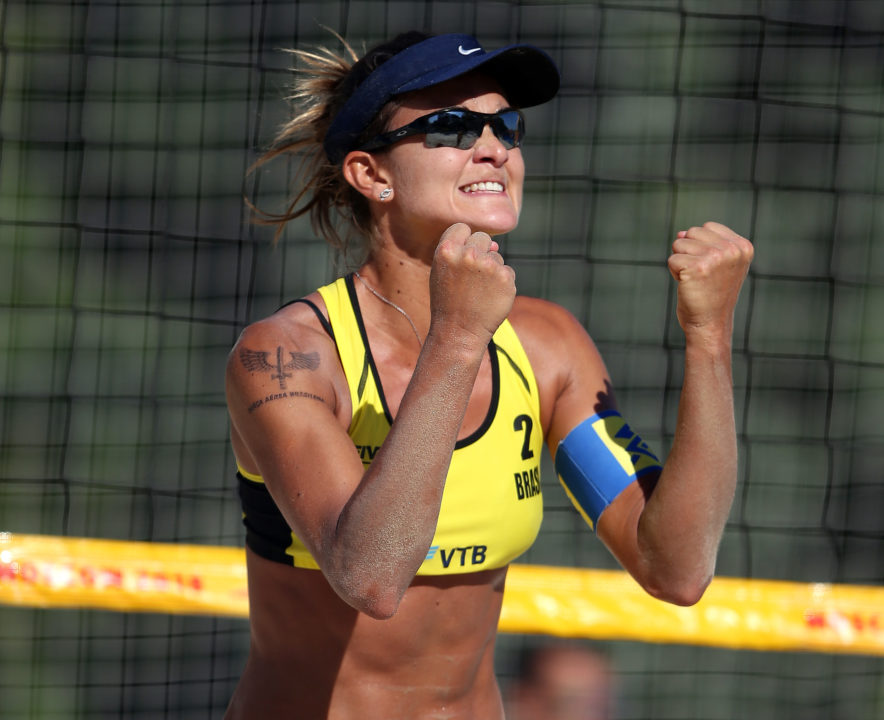 Women’s action began on Tuesday with a country quota match between Americans Betsi Flint/Emily Day and Sarah Sponcil/Lauren Fendrick. Flint/Day won 21-16, 14-21, 15-12 to clinch a spot in the second qualification round. The duo then dispatched Russia’s Anastasiia Frolova/Aleksandra Ganenko to move on to the main draw.

The other seven teams advancing to the main draw were:

Syrtseva/Moiseeva had to win to matches in qualifying, both against fellow Russians, first besting Elizaveta Novikova/Elena Fediunova 21-15, 23-21 and then topping Evgenia Ukolova/Ekaterina Birlova 21-18, 19-21, 15-12 to move on. The pair was the lone of six homestanding Russian qualifying squads to advance to the main draw.

Elize Maia/Maria Clara and Olimstad/Ulveseth also went to tiebreak in the second qualifying round. The Brazilians rallied past Poland’s Jagoda Gruszczynska/Aleksandra Gromadowska 17-21, 21-18, 15-6, while the Norwegians came from behind against Lithuania’s Ieva Dumbauskaite/Irina Zobnina 19-21, 21-11, 15-9.

On Thursday, top seeded Canadian Sarah Pavan/Melissa Humana-Paredes returned to form after a disappointing effort in Vienna (17th, losing in Round of 24), despite already having punched their ticket to the World Tour Finals beginning August 15. The pair won the Pool A crown with a pair of sweeps.

Second seeded Brazilians Agatha Bednarczuk/Eduarda ‘Duda’ Santos Lisboa followed up a quarterfinal appearance in Vienna with two wins for the Pool B title in Moscow. The pair, which also is warming up for the World Tour Finals, downed Flint/Day (21-19, 21-14) to claim the pool crown.

Americans Summer Ross/Sara Hughes will be playing for their tournament lives on Friday after dropping their opening Pool H match 21-19, 21-16 to Dutch pair Sinnema/Bloem.

Flint/Day and Kelley Larsen/Emily Stockman are through to the knockout rounds. Larsen/Stockman won their opening match before falling to Keizer/Meppelink in the Pool G finale (21-14, 21-14).