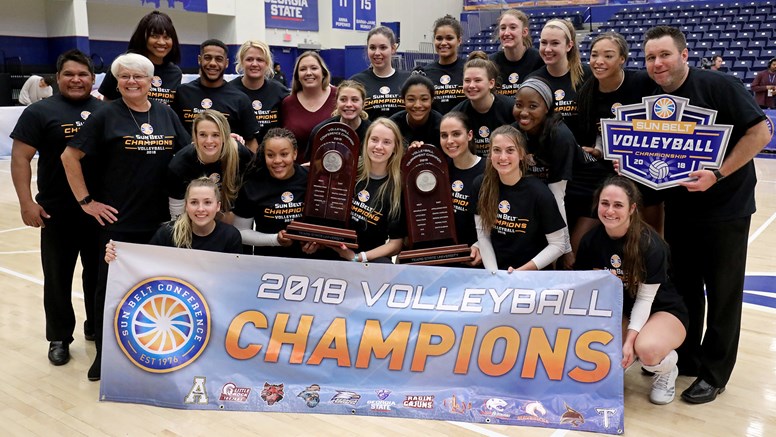 The top-seeded Bobcats (26-6) earned their first tournament championship since winning the title in their first year in the league (2013). They also secured the Sun Belt’s automatic berth into the NCAA Division I Volleyball Championship. The NCAA Selection Show will be broadcast live on ESPNU at 7:30 p.m. Nov. 25. The maroon and gold will be making their first trip to the NCAA’s since 2013 and will be making their 10th appearance in school history.

Senior Madison Daigle finished with a match-high 12 kills on a .476 hitting percentage. She was named the tournament’s Most Outstanding Player and became the first Bobcat since 2013 to win the honor (Caylin Mahoney). Joining her on the championship all-tournament team were junior Cheyenne Huskey and true freshman Janell Fitzgerald. Huskey tallied nine kills and just one error (.308), adding six digs, two blocks and two aces. Fitzgerald finished with nine kills on a .316 hitting clip and three blocks.

Kara Spicer led App State with 10 kills, but she hit just .182 in the match. Becky Porter registered 29 assists and 12 digs, while Emma Reilly finished with a match-high 19 digs.

SET 1
Texas State was able to steal a contentious opening stanza 27-25 to earn the early shot of momentum. Appalachian State initially led 7-1 and later held a commanding 11-4 advantage as the maroon and gold had a tough time eliminating the early-match jitters. The Bobcats settled in around the midway point of the period and began to chip away at the deficit. The Mountaineers enjoyed one final breath of fresh air at 21-16, but Texas State ventured on a 7-0 run to take its first lead of the day. App State was able to extend proceedings by fending off the first three TXST set points, but the Bobcats finally put their stamp on the period with an App service error and a kill from freshman Jillian Slaughter.

SET 2
The Bobcats turned on the afterburners in the second and cruised to a 25-12 triumph. The two sides initially chopped up the first 10 points, and TXST used an 11-2 run from there to find a commanding 16-7 advantage. Appalachian State could not find a way back into the frame as the top seed played out the rest of the set with a double-digit lead. The final four points were all scored on kills from Daigle.

SET 3
TXST went on top 5-4 early and led the rest of the way en route to claiming the title, 25-18. The Bobcats stretched their lead out to 12-5 at one point and held the Mountaineers at bay from there. App State pulled within four at 18-14, but the side would get no closer.

Texas State improved to 10-4 all-time in the Sun Belt Championship tournament and was making its fourth appearance in the title match since 2013. The Bobcats also improved to 6-3 all-time over the Mountaineers, which includes another sweep earlier this season in San Marcos. TXST also reached 26 wins for the first time since 2011.

The Mountaineers drop to 22-8 overall, while Texas State improves to 25-6 and earns the Sun Belt automatic bid to the NCAA Tournament.

Becky Porter posted her second double-double of the tournament with 29 assists and 12 digs. Emma Reilly tallied a team-high 19 digs in the contest.

The Black and Gold came out strong and won seven of the first eight points to open a 7-1 lead in the first set. Texas State chipped away at the lead used a 5-1 spurt to pull within 13-9. The Mountaineers pushed their lead back to 17-12, but a late 7-0 run by the Bobcats gave them a 23-21 advantage. Trailing 24-22, App State got kills from Spicer and Wilform to fend off two set points and tie the score at 24-24. Spicer registered another kill to fight off another set point and knot the score at 25-25. Texas State rallied to win the final two points and grab the opening set 27-25.

In Set 3, Wilform pulled the Black and Gold within one point at 6-5. But the Bobcats answered with seven consecutive points to open a 13-5 edge. The Mountaineers came back with four straight points to pull within 13-9, but could get no closer the rest of the way, dropping the frame 25-18.

For their efforts in the tournament, both Longley and Porter were named to the All-Tournament Team. Longley tallied 25 kills (3.6 k/s) in two matches on the weekend and hit .286. Porter posted double-doubles in both matches on the weekend, with 86 total assists (12.3 a/s) and 31 total digs (4.4 d/s).