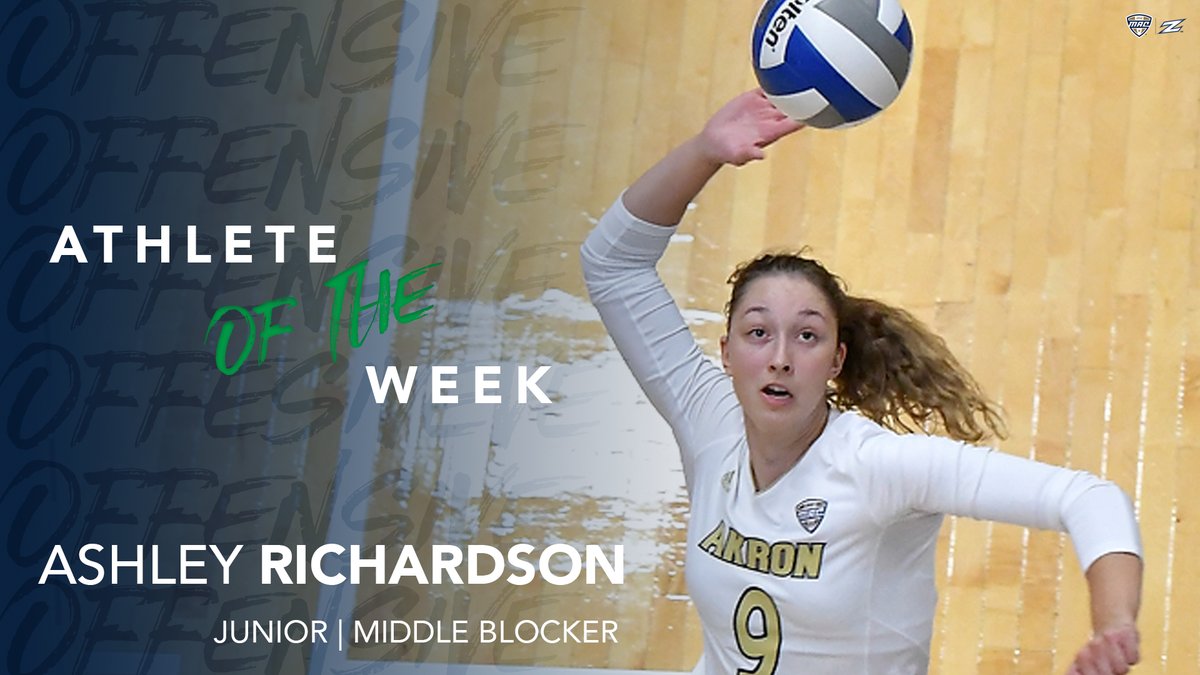 Ashley Richardson, Akron, Middle Blocker
Junior – Doylestown, Ohio/Chippewa
Junior Ashley Richardson was named to the Zips Invitational All-Tournament team after totaling 29 kills leading Akron to a 2-0 record over the weekend. The middle blocker committed just one attacking error on 43 total attempts, recording an impressive .651 hitting percentage. She also tallied three service aces and four blocks to add to her 4.86 points per set. Richardson tied her career high of 15 kills in the Zips three-set victory over Bucknell. On the season, Richardson holds a team-best .416 hitting percentage.

Meg Wolowicz, NIU, Middle Blocker
Senior – Manitowoc, Wisconsin/Manitowoc Lincoln
Wolowicz averaged 4.95 kills per set and hit .255 over five matches this week… Set a career-high with 30 kills and hit .352 against Chicago State on Sept. 11… Had her third double-double of the season on Sept. 12 with 22 kills and 11 digs against Southeast Missouri State on Sept. 12… Led NIU with 20 kills against East Tennessee State on Sept. 14, hitting a season-high .381… Had 18 kills and a season-high five blocks in five-set match against Western Kentucky on Sept. 15… Named to WKU Tournament All-Tournament Team.

Kallie Seimet, Bowling Green, Libero
Senior – Oregon, Ohio/Clay
Kallie Seimet was named MVP of the BGSU Invitational after leading the Falcons to a 3-0 record and tournament championship. Seimet averaged 7.60 digs per set and had just two reception errors on the weekend, to go with two service aces. She had 35 digs in the team’s four-set win over Marshall, as well as a perfect serve receive percentage on 20 attempts, and followed that up with 27 in a three-set sweep of IUPUI, before finishing with 14 against Nicholls State.

Meg Starling, Ball State, Middle
R-Senior – Hopkinsville, Kentucky/University Heights
Redshirt senior middle Meg Starling turned in a dominating effort at the net to lead the Ball State women’s volleyball team to a perfect 4-0 record last week. Over the Cardinals’ four matches, she collected 23 total blocks and averaged 1.64 blocks-per-set. She opened the week with seven total blocks in a sweep of IUPUI and followed with seven more in a five-set victory over UMBC. After collecting three blocks in the sweep at Towson, including the block that ended the match, Starling added six more in the victory over La Salle to help the Cardinals clinch the Tiger Invitational championship. Starling also had a solid week on offense, which some say is the best defense, ranking second on a very balanced Ball State offense with 33 kills and a 2.36 kills-per-set average. She also hit .304 (33-5-92) for the week. Starling tallied a season-high 12 kills in the sweep of Towson, while adding all 11 in the five-set win over UMBC.

Congrats to @MegStarling1, the @MACSports West Division Defensive Player of the Week.

Tia Gleason, Buffalo, Setter
Sophomore – North Bay, Ontario/North Bay
It was another big weekend for sophomore setter Tia Gleason who led the Bulls to a pair of wins at the American Volleyball Classic.  She opened the weekend against American on Friday night and led the Bulls to the 3-0 road victory while dishing out 34 assists and adding eight digs.  She had a career performance in the four-set win over Howard on Saturday as Gleason finished with 56 assists in the four sets, averaging 14.0 assists per set.  Gleason also added 25 assists in UB’s match against fifth-ranked Penn State.

Carly Townsend, Toledo, Setter
Senior – Germantown, Wisconsin/Germantown
Averaged 11.1 assists per set over the weekend in UT’s two matches, both five-set victories…tallied 54 and 57 assists, respectively, in the matches against Bucknell and Youngstown State, which were played consecutively…Also had 13 digs against the Bison, her third double-double of the year…All five of the Rockets’ wins this season have come with Townsend as the team’s main setter…Contributed offensively as well, recording 2 kills and three blocks against Bucknell and 4 kills plus two blocks against Youngstown State.

Congratulations to Carly Townsend on being named MAC West Setter of the Week!#GoRockets 🚀🏐 pic.twitter.com/CK7qlHskR3