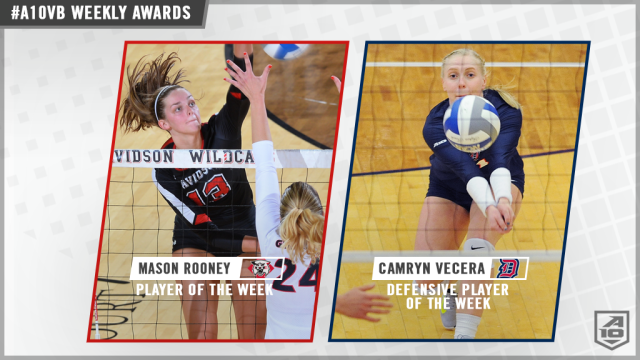 NEWPORT NEWS, Va.—Davidson senior Mason Rooney was named the Atlantic 10 Conference Volleyball Player of the Week, while Duquesne senior Camryn Vecera was named Defensive Player of the Week. Rhode Island freshman Mariah Paulette was selected as the league’s Rookie of the Week. All awards were for matches played Aug. 27-Sept. 2.

Rooney recorded a pair of triple-doubles last week as the Wildcats picked up wins against rival Charlotte and Mississippi State. The setter/opposite side hitter from Atlanta, Ga., had 44 kills, averaging 2.75 per set, 87 assists (5.44 per set) and 31 digs for the week. In a 3-2 win over Charlotte, Rooney recorded 10 kills, 30 assists and 10 digs to go with three blocks. She was also named to the Appalachian Invite All-Tournament team.

Vecera recorded 72 digs over three matches last weekend averaging 6.00 digs per set. The libero from Plano, Texas, was named to the Duquesne Invitational All-Tournament team after recording 30 digs against Bowling Green and 25 against UNLV.

Paulette was named to the Holy Cross Invitational All-Tournament team after leading the Rams to a pair of wins over Columbia and Holy Cross. The freshman middle blocker from Toledo, Ohio, averaged 2.18 kills per set along with 1.18 blocks per set. For the week, she 24 kills and posted an attack percentage of .360.