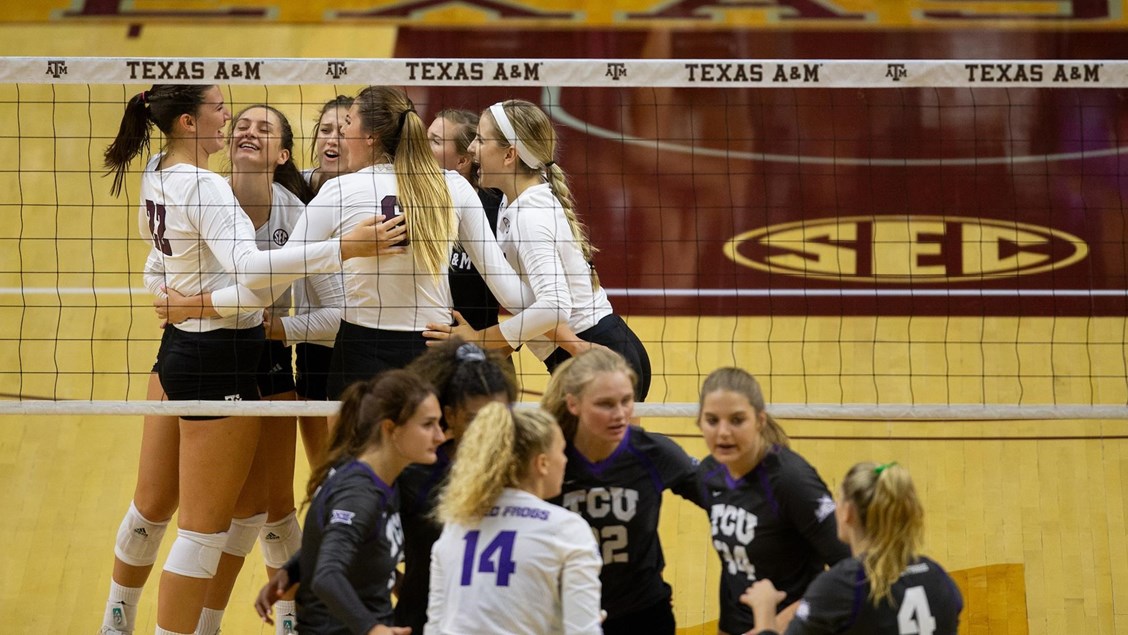 The Texas A&M women lost a 3-2 match to TCU, but they got some positive signs from the many new faces that will adorn Reed Arena this season. Archive Photo via Texas A&M Athletics/Sam Craft

While open intrasquad scrimmages kick off the season for most NCAA women’s volleyball teams, a select few programs are more adventurous, going beyond the walls of their own gym to seek a live exhibition opponent to use as a pre-season tune-up.

With official competition allowed to begin next week, these exhibition matches don’t go on any official tally sheets, but they are crucial opportunities to test their players in live-game situations and to prepare their incoming freshmen for the routine and ceremony involved in NCAA athletics.

Below are a few of the highlight matches. Not mentioned is the Western Kentucky vs. Kentucky exhibition. Typically one of the highlights of the exhibition schedule, especially after Kentucky knocked WKU out of the NCAA tournament last season 3-2 in the 2nd round, coaches used this year’s game as more of a cooperative event, and agreed to not share stats or scores.

Virginia Tech, who finished 12th in the ACC last season (out of 15 teams), knocked off Radford, the defending Big South champions who played in last year’s NCAA tournament. Hokie sophomore Kaity Smith recorded a double-double with 19 kills and 10 digs, and hit .382 on the match. Sophomore libero Kylie Thomas contributed 19 digs, 6 more than her career high, and 8 Tech blocks and 6 Tech aces held Radford to a .179 hitting percentage.

“We are still learning on how to have a consistent mentality from point one to 25,” head coach Julie Wilson said. “It’s really helpful playing a team like Radford because they are so scrappy and play hard and so fast. It exposes you if you’re not staying focused and driving all of those points. I thought we did a better job of responding later in the match with pushing through some of those long rallies.

“When you have an outside [hitter] hitting over .350 in Kaity Smith and also getting double-digit digs, that’s a really solid performance by her. I thought we had some people come off the bench and do a nice job, with Abby [McKinzie] making crucial plays at key moments and Tessa [Wyner] came in and gave us a good spark. I thought everyone played well at times, we just have to figure out a way to be more consistent.”

The Pitt Panthers, the co-defending ACC Champions, are ranked in the AVCA pre-season coaches’ poll for the first time since 1982. The team came out hot in their first inter-collegiate competition of the season with a sweep of Ohio.

“I’m really pleased with the team’s performance,” said head coach Dan Fisher. “We were able to throw a totally different lineup out during each set and came away with wins in all three against a team that I think is going to be very good this year. You always see things a little differently when its game time and we saw some areas we need to work on, but overall very positive.

The Panthers hit .321 as a team with 8 blocks in just the 3 sets of action. Junior middle hitter Layne Van Buskirk had 9 kills on .667 hitting for the Panthers, while setter Kamalani Akeo led the Panthers in both assists (19) and digs (11). Chinaza Ndee had 6 block assists to her credit.

The Laura “Bird” Kuhn era in College Station unofficially began on Saturday with a 3-2 exhibition loss to TCU on Saturday.

While TCU hasn’t yet released details from their performance (and no s tat sheets were published by either side), the most exciting news for the Aggies was the 6-block performance from freshman London Austin-Roark. After graduations and the medical retirement of 2016 All-American Kaitlyn Blake, the middle had suddenly become a big question-mark from A&M. But, as a team they out-blocked TCU 8-4 in the match, so in spite of the loss, that was a positive sign. A&M also had 9 blocking errors, though, so it’s still a work in progress.

Another Aggie debutante in the match was Brookah Palmer, a transfer from the University of Houston who redshirted last season, played her first first match in Reed Arena, and first NCAA match since 2015 (she missed the season prior to her redshirt with a shoulder injury), and had 10 kills.

That was 2nd-most on the team behind the Aggies’ other junior outside hitter Hollann Hans, who had 20 kills, 19 digs, and 23.5 total points.

A match pre-determined to be 4 sets long saw Creighton sweep the first 3 before thee Kansas State Wildcats ended the night on a high note by winning the 4th set.

For Kansas State, redshirt senior outside hitter Kylee Zumach had 18 kills, 11 digs, and hit .444 in the match, while freshman opposite Gloria Mutiri had 15 kills and 8 digs of her own.

“I thought we had some individual performances that were really positive,” Kansas State head coach Suzie Fritz said following the match. “Kylee Zumach‘s effort was as collective as she’s ever had,­ in regards to kill production, swing management, dig effort and passing.

“It was Gloria (Mutiri)’s first real go with the team and from an attacking perspective, specifically, I thought she did a really nice job there.”

The Seminoles, after a disappointing 2017, got off to a strong start in an exhibition on Friday with a sweep over South Alabama.

“I thought overall it was a good night,” said head coach Chris Poole. “We identified the weaknesses we need to focus on and still have a week to improve before playing another opponent. I believe the potential for the team is very great, but we need to be more consistent with our overall play. Our defense and offense can both be more aggressive and we missed way too many serves.”

“Our team responds best when they are pushed,” Hendrichovsky said. “We have a tough non-conference schedule, and I thought it would be better for us this weekend to find out what we need to get better at and work on, and what we’re doing well going into next weekend, as opposed to playing somebody just to play and not really learn exactly where we’re at.

“Florida State is a quality opponent nationally and in the ACC, and it was a perfect opportunity for us to see. I thought our team responded and did exactly what we asked them to do. We played a remarkable set one; if we pull out that set then it could be a different match. But the things we have been working on this preseason we did well, and the things I thought we needed to work on – we definitely were exposed and we need to get reps in those areas.”

The Jayhawks are in major rebuilding mode this year, trying to bounce back from a disappointing 2017. In front of a sold-out crowd at the Horejsi Family Athletics Center, Kansas won 3-1 over UMKC, including three very-tight sets to open the match before Kansas rolled in the clinching 4th.

Junior outside hitters Patricia Montero and Ashley Smith combined for 37 kills and .394 hitting, which off-set offensive struggles elsewhere, as the team only finished with a .250 hitting percentage as a team.

Kansas had 11 blocks in the match, and used all 13 players on the roster at some point in the game.