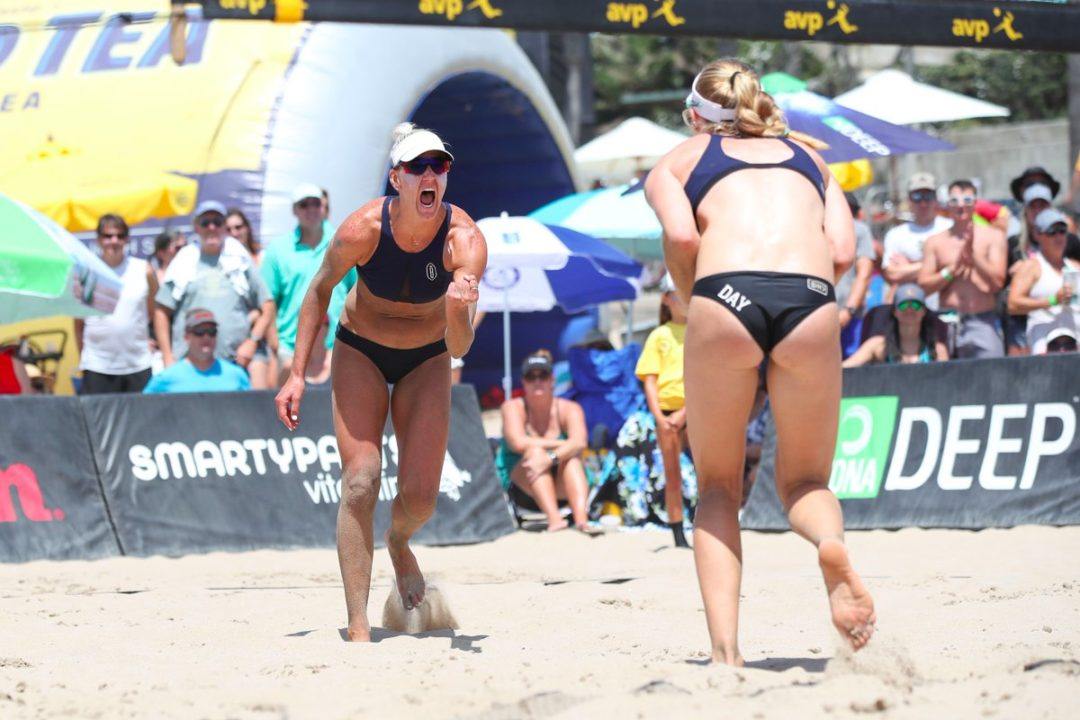 Former partners Brittany Hochevar and Emily Day, who have won the last two Manhattan Beach Open titles together, will be on opposite sides of the court with another title shot on the line on Sunday. Meanwhile, No. 6 Jeremy Casebeer/Reid Priddy crashed the men's final four playing through the contender's bracket.  Current Photo via AVP

Former partners Brittany Hochevar and Emily Day, who have won the last two Manhattan Beach Open titles together, will be on opposite sides of the court with another title shot on the line on Sunday.

Hochevar and Kelly Claes, the top seed in the tournament, made their way through the winner’s bracket, needing just a sweep of No. 5 Kelley Larsen/Emily Stockman (21-13, 26-24) on Saturday to advance to the final four.

Klineman/Ross, who have four sweeps thus far in the tournament, will face Larsen/Stockman, who rounded out their Saturday with a  21-15, 21-16 win over No. 20 Corinne Quiggle/Kimberly Smith in contender’s play. Quiggle/Smith had worked their way through the contender’s bracket with four victories, topping the No. 14, No. 22, No. 10 and No. 8 seeds, after falling to No. 4 Nicole Branagh/Caitlin Ledoux in the second round.

On the men’s side, the top three seeds plus No. 6 Jeremy Casebeer/Reid Priddy are the last men standing.

All four teams had to make their way through tiebreak matches in their final contests heading into the semifinals.

Dalhausser/Lucena have won three of the last four Manhattan Beach titles, save 2016 when Jake Gibb/Casey Patterson teamed up for the win. Dalhausser/Lucena have two AVP titles under their belts in 2018 (Austin – May 20, New York – June 10). Crabb/Gibb won in Seattle (June 24), while Brunner/Hyden stood atop the podium in Hermosa Beach (July 29).

Who won on the Women’s side? Can’t find results

The women’s final is happening right now. It is April Ross/Alix Klineman vs. Kelly Claes/Brittany Hochevar. Live updates here: http://scoring.avp.com/. We will have a full recap when it is over.