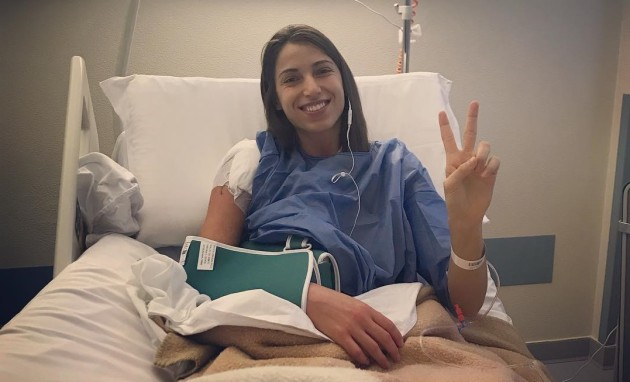 Bulgarian women's national team star Elitsa Vasileva had arthroscopic surgery on her right shoulder on March 21, the first step in her recovery from the injury suffered in the Russian Superliga playoffs. Current Photo via Elitsa Vasileva

Bulgarian women’s national team star Elitsa Vasileva had arthroscopic surgery on her right shoulder on March 21, the first step in her recovery from the injury suffered in the Russian Superliga playoffs.

The 6-4 1/2 outside hitter posted a positive note to her fans, even joking about the reasoning for her injury.

One ball in defense and here i am…😮🤭😐the arthroscopy went perfectly thanks to dr. Porcellini🔝👨🏻‍🔬now few days to recover and off to work with @elisa.ds aspetta mi💪🏻💪🏻💪🏻

She later posted a photo of her support group, including her agent Steve Barbierii and fellow volleyball player Aleksandar Atanasijevic.

Vasileva suffered the injury in Dinamo Kazan‘s sweep of Sakhalin and will not return to the team this season. Kazan advanced to the Russian Superliga semifinals with the victory.

Despite the injury, the club season rolls on and Dinamo Kazan will face Imoco Volley Conegliano in a pair of Champions League matches, March 23 (L 3-0) and April 4 before returning to Russian Superliga action against Dynamo Moscow April 16 and 17.

It is unknown if Vasileva will be back to full form to play with the Bulgarian national team at the World Cup in Japan in October.