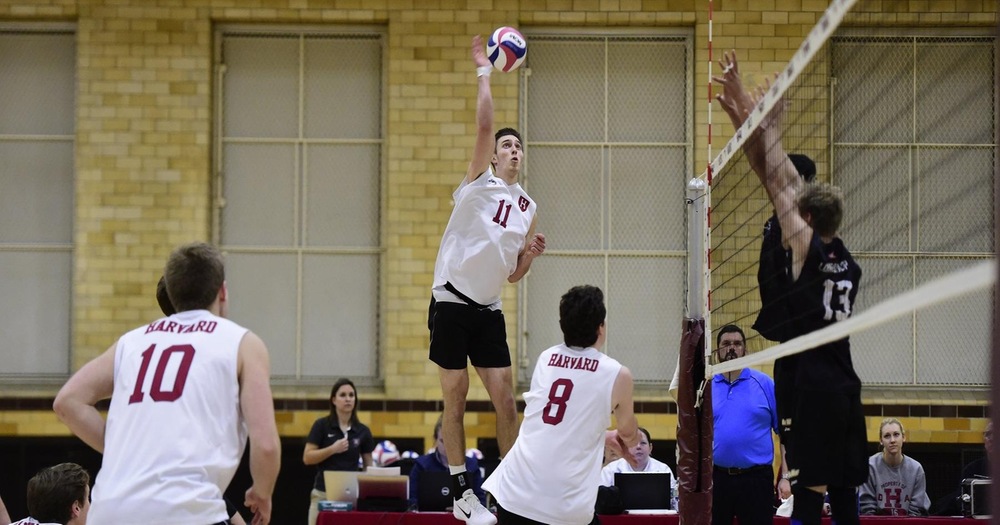 Harvard turned the lone upset of the early Friday matches, besting No. 20 Saint Francis. No. 14 Fort Wayne and Lincoln Memorial held home court, while No. 16 George Mason and No. 17 Penn State picked up road wins.  Current Photo via Harvard Athletics

Harvard turned the lone upset of the early Friday matches, besting No. 20 Saint Francis. No. 14 Fort Wayne and Lincoln Memorial held home court, while No. 16 George Mason and No. 17 Penn State picked up road wins.

Key Statistics: Harvard outhit the Red Flash .340 to .167 in the win, although SFU starred with a .650 effort in its Set 3 victory. The Crimson also edged Saint Francis in kills (42-39) and blocks (6-5) to notch their third straight win. The Red Flash won the serve (8-6 in aces). Harvard hit .615 in the opening stanza and followed with three .200 or better efforts.

Stat Leaders: Senior middle Brad Gretsch led all hitters with 15 kills for the Crimson, while sophomore outside Erik Johnsson (12) and senior middle Riley Moore (10) followed. Moore hit at a team-leading .692 clip (10-1-13) and put up a match-high five blocks. Gretsch hit .480 on the night, while Johnsson served up four aces and added seven digs.

It Was Over When: Harvard raced out to a 12-2 advantage in Set 4 with help from four blocks, three by Moore, and two Johnsson aces. Saint Francis scored four in a row, including a block and a kill by Thompson, to cut the margin to six at 12-6. The Red Flash were within six twice more, at 16-10 and 17-11, but could not break through. Two kills by Moore and an ace by Johnsson bumped the Crimson advantage to nine at 23-14. A service error and a Marko Kostich putaway capped the 25-15 win and the match.

Key Statistics: Fort Wayne hit .395 for the match and put up nine blocks to grab its first sweep of the MIVA season and keep Quincy winless in league action. The Mastodons boasted a .395 to .233 lead in hitting efficiency, a 9-4 edge in blocks and a 3-1 advantage in aces. Both teams notched 41 kills. After hitting .333 in the opening set, Fort Wayne notched a pair of .420 or better efforts to round out the match.

Stat Leaders: Sophomore outside Pelegrin Vargas downed 10 kills and three others added seven or more to guide the Mastodons to victory. Freshman middle Tomas Gago posted nine kills on an eye-popping .900 hitting effort (9-0-10) and put up a team-high six blocks. Redshirt junior outside Tony Price chipped in eight kills on a .571 clip and five stuffs. Redshirt junior outside Colton Stone rounded out the offense with a seven-kill effort and was one of four Mastodon players with four digs in the contest.

It Was Over When: After the teams split the first 26 points of Set 3, Fort Wayne pulled away with a 5-0 run, including three blocks by Gago and Price. After the Mastodons took the 18-13 lead, the teams traded points over the next 14 serves, leading to the 25-20 win. Gago notched three kills down the stretch for Fort Wayne including the final two points, while Vargas added a pair of putdowns. Two kills by Sheets and two by Davis buoyed the Hawks as they answered each Mastodon score.

Key Statistics: Lincoln Memorial notched its 11 win of the season, setting a new program high for victories, with a dominant hitting effort Friday night. The Railsplitters racked up a .409 hitting percentage, while Alderson Broaddus hit just .120 in the match. LMU also outdid the Battlers in aces (6-2) and blocks (8-3). Both teams tallied 33 kills. Lincoln Memorial hit .389 or better in all three sets, including a .435 effort in Set 1.

It Was Over When: Lincoln Memorial put Set 3 out of reach with an 8-2 run early in the stanza, turning a 4-all tie into a 12-6 advantage. Six Battler miscues aided the LMU effort. Alderson Broaddus called timeout and scored two of the next three points on kills by Christiansen and Miller, but could not stop the upcoming Railsplitter onslaught. Lincoln Memorial outscored the Battlers 12-5 down the stretch, including an 8-2 run, which put the Railsplitters up 21-10. Four different players posted kills and Carvalho added a block and an ace to his putaway in the run. Christiansen slowed LMU with back-to-back kills, but Riblett and Walley combined for four points to end the night. Riblett had kills that bookended a pair of Walley aces.

Key Statistics: The Patriots secured a spot in the EIVA tournament, outlasting NJIT in five sets and moving to 9-0 for their best ever conference start. George Mason won despite being outhit .342 to .284 and outblocked 9-3 in the match. The Patriots boasted a 63-54 lead in kills and 4-3 edge in aces, while extending their school record win streak to nine matches (also 2016). George Mason won the decisive fifth set despite being out hit .455 to .357.

Stat Leaders: Sophomore opposite Hayden Wagner recorded a career-high 25 kills, while hitting at a .364 clip and adding a team-best eight digs for the Patriots. Junior outside Kyle Barnes (14) and redshirt senior outside Christian Malias (13) also reached double-digit kill tallies for GMU. Barnes added eight digs and a team-high two blocks alongside sophomore middle Bryce Gatling. Senior right side Brian Negron added five kills on a .833 hitting effort (5-0-6) to go with 52 assists and a team-high two aces.

Freshman opposite Alvaro Gimeno downed 17 kills to lead the way for the Highlanders, while sophomore opposite Piotr Namiotko (14) and sophomore middle Luca Berger (10) followed. Berger hit at a team-high .474 clip and put up a team-best seven blocks, while Gimeno served up a team-leading two aces and Namiotko added five stuffs. Senior middle Kevin Myren and sophomore outside Bailey Mundy chipped in five kills apiece. Redshirt senior opposite Raymond Kowalski, who has seen limited action since the team’s four-set loss to Princeton March 10, played in just one set for NJIT.

It Was Over When: NJIT scored three of the first four points in Set 5, two on Gimeno putaways. George Mason scored three straight with kills by three different players to go up 4-3. The Highlanders regained the lead 7-6 and went on to an 11-9 advantage as the Patriots committed five miscues. GMU called timeout and righted the ship, closing out the set on a 6-2 run. Three NJIT errors brought the score level at 12. After a block by Namiotko and Berger, a Malias kill and back-to-back aces by Negron stole away the 15-13 win for the Patriots.

Key Statistics: Penn State dominated the net with a 14-6 advantage in blocks and outhit the Pioneers .385 to .217 in the road victory to kick off a four-match swing. Sacred Heart edged the Nittany Lions 5-4 in aces, while both teams managed 51 kills. Penn State hit nearly .300 or better in all four sets, culminating with a .478 effort in Set 4. SHU recovered after hitting just .088 in Set 1, but regressed to a .160 clip in Set 4.

It Was Over When: Set 4 was a back and forth affair and neither team led by more than three until the final point. After a 3-all tie, a McLaren kill and SHU miscue gave Penn State a 5-3 lead. The Nittany Lions never relinquished the advantage after that. The Pioneers tied it up at 12 with a Waumans putaway and PSU hitting error. A stuff by Gear and Mende put Penn State back on top by three at 15-12. Sacred Heart was within one three times, last at 20-19. A stuff by Luke Braswell and Donorovich made it 22-19 PSU, but back to back kills by Waumans prompted a timeout. Waumans mishit out of the break and then was stuffed on back to back points by Lee Smith and Gear to wrap up the match at 25-21.