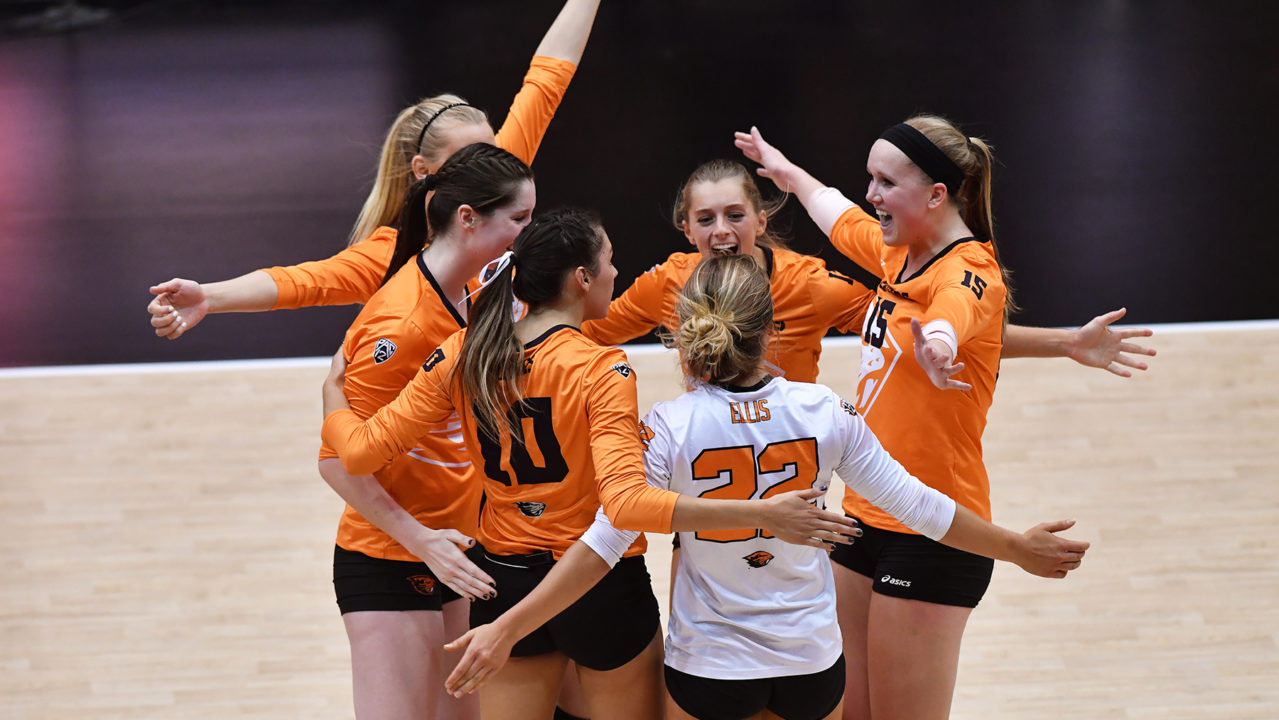 In set one, Oregon State sprinted to a 19-4 lead then fought off several runs by the visitors to win 25-17 on a Bennett kill. The second frame was more closely contested, with the Beavers leading 15-13 at the media timeout then holding on for a 25-22 victory.

After the intermission, Washington State made a signature statement by jumping to a 16-2 lead behind an 11-point serving run by Brown, then winning 25-6. The fourth frame was back-and-forth throughout, but the Beavers prevented the tiebreaker set by winning 25-22, with the final point coming on Goings’ 13th kill of the night.

“That wasn’t good enough,” Oregon State head coach Mark Barnard said. “We hit some highs that we’ve never seen before, but we also plumbed some depths that were horrific.”

Next up, the Cougars hosts Arizona State on Wednesday, while Oregon State welcomes #20 UCLA to the Beavers’ home court, also on Wednesday.

Beavers Hold off Cougars in Four

CORVALLIS, Ore. – The Oregon State volleyball team defeated Washington State Sunday in a four-set match that featured long scoring runs by both teams. For the Beavers, the win finished a season-sweep of the Washington schools for the first time since 1984.

“That wasn’t good enough,” head coach Mark Barnard said. “We hit some highs that we’ve never seen before, but we also plumbed some depths that were horrific.”

Oregon State came out swinging on Sunday afternoon against Washington State getting off to an early 7-1 lead with four different players recording kills in the early going. The Beavers were cruising 19-4, and the Cougars had used both of their timeouts, behind a pair of 6-0 runs. However, the Cougars gathered themselves to pull within 23-17 before Maddie Goings and Haylie Bennett recorded back-to-back kills to put away the set, 25-17.

The second set was a give-and-take with neither squad ever able to pull away. WSU had a two-point lead at 10-8, but Oregon State was able to battle back behind the offense of Goings and Kory Cheshire to take a 15-13 lead at the media timeout. The Beavers continued to press extending their run to five straight points on a pair of kills from Serena Bruin and a Cheshire ace, one of three on the afternoon, to take a 18-13 lead. The Cougars closed the gap again with four points in a row to get within 20-18. Another pair of kills by Bennett helped the Beavers hang on to a win the set, 25-21, and take a two sets to none lead at intermission.

The momentum swung wildly during the 10-minute break and Washington State came out on fire taking a 5-1 lead before extending it to 16-2. WSU went on to take the set 25-6.

The Beavers finally turned the momentum back early in the fourth set, fighting back from an early deficit on a 4-0 run to take the lead 6-4. OSU continued to ease ahead opening the lead to 10-6 before WSU came back with four straight to tie the set at 12-12. The Cougars continued to keep pressure on the Beavers taking the lead 19-16. Oregon State fought back to tie the score at 19-19 and then 21-21 retaking the lead on a block by Bennett and Cheshire. Two more kills from Goings and one from Bennett finished the match as the Beavers took the set 25, 22.

Goings led the Beavers with 13 kills, and Bennett and Marshall added 12 and 11 respectively. Marshall and Grace Massey led the squad with 15 digs apiece.

Oregon State remains at home to finish the regular season next week when the Beavers host UCLA on Wednesday at 1 p.m. and Oregon on Friday at 7 p.m.

WHO WHAT WHEN WHERE…

Junior Taylor Mims led the match with 23 kills while hitting .288, and served one ace, had 15 digs and six blocks. Ella Lajos contributed nine kills (.300) and nine blocks. Savanah Smith had six kills and Jocelyn Urias added five kills. Ashley Brown had 33 assists, three kills and one ace. Alexis Dirige had a match-high 21 digs, and Olivia Coale had a career-high 11 digs.

Claire Martin led the match with her season-best 10 blocks as WSU tallied 14.5 blocks, nearly triple the 5.0 blocks for OSU.

WSU Head Coach Jen Greeny said, “I thought for the most part we did a nice job. Definitely in that first set we started really slow but then we were able to settle in a little bit. We were definitely better the second half of that first set. Then just battled in the second. Oregon State is a great team. They have a lot of different weapons and they move their players around quite a bit. Just a solid, solid team defensively and passing so it’s hard to find some cracks. We came out on fire in that third set and that’s not showing what kind of a team Oregon State is either. We were getting the ball to bounce our way and serving tough. We couldn’t hang on there in the fourth to be able to push it to a fifth set.”

On getting the block going Greeny said, “We did a nice job serving and making them a little more predictable as the match went on. Then we got stuck in a couple of rotations and they ran off a bunch of points. It was nice to see our block get going especially in that third set, we were just on fire. We have to be more consistent throughout the entire match.”

On the final regular season matches Greeny said, “Two more left. We definitely need one if not two more wins to secure a spot in the NCAA Tournament. Hope a lot of the Cougars faithful, season ticket-holders and families who are still in town to come to Bohler Gym Wednesday and support those seniors and the team.”

Junior middle blocker/opposite Claire Martin said, “I believe that with our tough serving, their offense was easier to read which helped us blockers find our hitters better. I just kept telling myself to be big and press over! For these upcoming games, we need to play with the same energy and intensity that we know we can play and I think playing at Bohler Gym, with our fans’ support, will help us play better.”