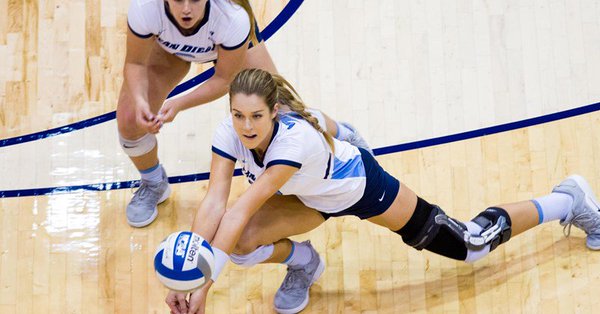 Victory in the West Coast Conference belonged mostly to the road team Thursday night as three of the four matches saw the visiting team leave with a win. In San Francisco, it was #1 BYU, who was once again challenged in the second and third sets, but left with a sweep. In Stockton, Portland did not commit an attack error until the third set in sweeping the Pacific Tigers. Despite being winless in the conference Santa Clara battled San Diego tough in all three sets before falling to the Toreros. The only team to win at home was Saint Mary’s, who swept visiting Gonzaga.

San Diego picked up its fifth conference win Thursday night after surviving a dogfight from the Broncos at the Leavey Center in Santa Clara.

The Toreros were outhit, but managed to pull out the sweep in three highly contested sets.

The second set was tight from start to finish. San Diego grabbed the lead at 5-4 and managed to keep a slim edge over Santa Clara throughout most of the set. After trailing 21-18, Santa Clara fought back to tie the set at 21 with a 3-0 run. The Broncos would tie it at 23 and 24 before San Diego captured the final two points for a 26-24 victory.

San Diego looked like it was going to cruise in the third after jumping out to an 8-2 lead out of the gate. But the Broncos chipped away, pulling to within one at 8-7 and later tying it up at 15 apiece. The Toreros drew match point at 24-22, but Santa Clara evened the score. San Diego would survive, after back-to-back kills by Addie Picha ended the set and the match.