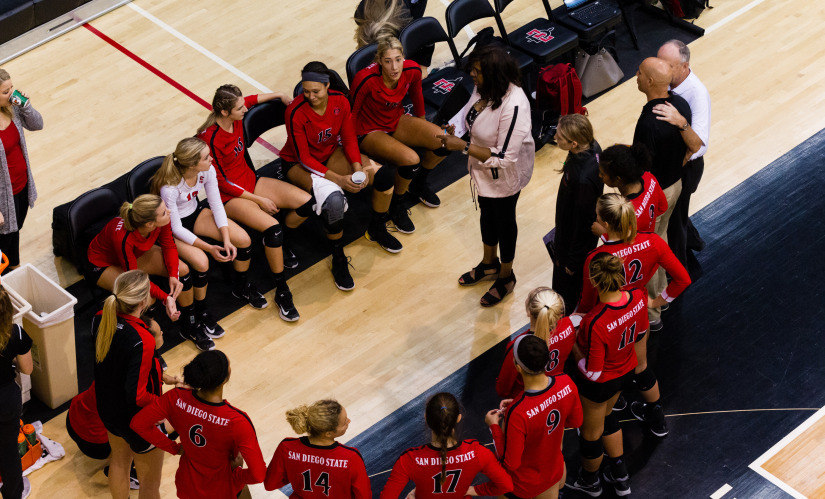 San Diego State is adding a pair of transfer who play the same position out of the Pac-12 in former Oregon State setter Delaney Taylor and former Utah setter Camryn Machado. Taylor is currently listed on the 2018 San Diego State roster while Machado is not, although she took to Instagram to announce the news and is likely waiting on enrollment for the move to be made official.

A 5’10” native of Berkeley, California, Taylor will be on her third school with San Diego State. She immediately went from Berkeley High School to Middle Tennessee for one season, notching 740 assists, 120 digs, 25 blocks and 14 aces in her true freshman season. That pushed her on to Oregon State where as a true sophomore in 2016 she saw action in just seven sets. Then, last season she redshirted, making her a fourth year junior in 2018.

Both setters now give the Aztecs three setters plus any other newcomers for the fall. The lone returner to the group is sophomore Gabi Peoples, who was the team’s leader in assists per set (9.81) last season and started in 24 of the Aztec’s 31 matches.

The moves combine with junior college transfer (College of the Canyons) and outside hitter Emily Burns to give the Aztecs a trio of players who were at other schools last season. They’ll look to give the team a boost as they look to build on a 16-15 season in which they went 10-8 playing in the Mountain West Conference.

I want to thank the University of Utah volleyball program for a memorable experience. Playing in the PAC 12 with amazing teammates and coaches helped me grow as a volleyball player. I’m extremely excited to announce my commitment to play volleyball at San Diego State University! I’m thrilled to be back in San Diego and can’t wait to see what the future holds! Go Aztecs!! ❤️?