Scouting Report Review: #1 PSU over #12 Wisconsin; An Inside Look 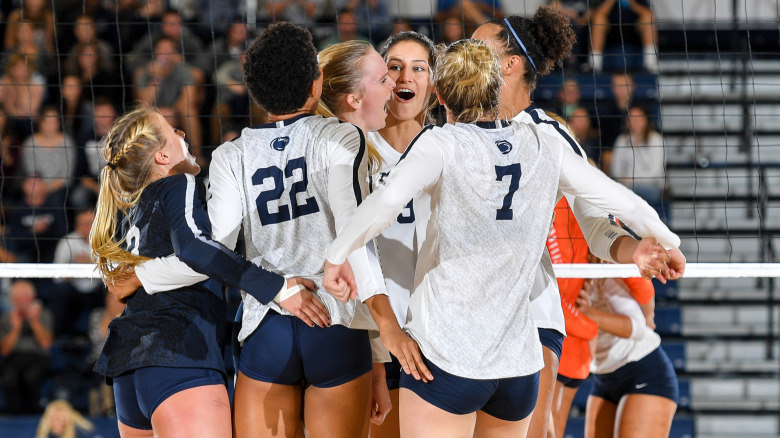 This is the second of a two-part scouting report on the Wednesday night match between #1 Penn State and #12 Wisconsin. Current Photo via Mark Selders

This is the second in a two-part scouting report where we feature a particularly big match. The match in question is arguably the biggest match the Big Ten has to offer this week, aside from Nebraska going to Michigan State on Friday, October 27. This scouting report review follows up the original SR written yesterday, and if you missed it, you can read the report here. If you’re not as volleynerdy as us, you can read the regular match recap here.

First, we would like to touch on the particular parts of the Scouting Report that may or may not have worked for each team, if they followed those plans at all. Next, well recap what went right and wrong for both teams overall, and if something a little extra was sprinkled in to assist in that teams’ victory.

The good news here is that Wisconsin was only aced twice in the entire match. The bad news is that the two aces don’t tell the entire story. When your primary offensive weapons are middles, you need to pass well. We all know that. After watching the match last night, Wisconsin also offered up 7 overpasses, leading directly to 7 Penn State kills. One can chalk those extra points to being just as good as aces, although they won’t show up like that in the stat sheet. That’s 7 extra points you have to make up as a team, or, more importantly, 7 less points the number one team in the country needs to work for to win the match. The Badgers did, however, receive 27 kills (hitting .351) combined from their top two options, Rettke and Williams, the team’s two starting middles.

What I also didn’t cover in the SR was Wisconsin’s ability to serve tough, but sometimes reckless. Prior to last night’s match at Penn State, Wisconsin had 65 aces to 166 service errors. That’s averaging nearly four missed serves per set. Unfortunately, Wisconsin stuck to that average, with only 2 aces of their own on the evening, coupled with 15 missed serves in the four sets. The Badgers are now averaging less than an ace per set while missing 4 serves per set. A rough statistic to overcome, indeed. It was only fitting that the match ended on a Wisconsin service error.

OK, so one out of three ain’t bad, right? Technically, you could add the efficiency factor as a success to the floor defense that was obviously successful from the start. Any team would take hitting .241 against Wisconsin and chalk it up as a victory. But this was Penn State’s second-worst hitting percentage of the season, a full 110 points lower than their average coming in. Offensive balance? The normally reliable Ali Frantti was replaced by Nia Reed halfway through set 2, and their leading attacker, Simone Lee, finished with only 8 kills (2 kills per set below her average) and hit .188 on the night. Without Nia Reed’s 11 kill spark off of the bench (a career high, mind you), would this match have turned out differently? Maybe. Reed entered with PSU down 16-9 in the second, and even Reed herself is quoted as calling her position being the “designated hitter” on the team. Eight kills on nine errorless swings definitely fits the bill of DH for this squad. Floor defense was a no-brainer for this team. Kendall White led all defenders with 21 digs, and Simone Lee made up for her lack of terminations with a career-high 18 digs. No other PSU player finished with more than 7 digs.

I had a few rhetorical questions to finish the previous SR. Here’s where I answer them:

This is a heck yes. 17 kills, hitting almost .400 with 4 blocks? This freshman was prepared, good passing or no. Like Minnesota, the Nittany Lions had no answer for Rettke.

I recall a conversation I had once with coach Jody Rogers, who started her career at Division II University of Indianapolis, back in 2007. She’s currently the coach at Virginia Commonwealth and leads the Atlantic 10 conference. Back in her early years for the Greyhounds, she likened her bench to plain vanilla ice cream. Looks good, tastes good, not much variety. When she first made the NCAA II tournament, if things went south, she didn’t have much to turn to to spark variety. She compared other teams’ benches to having sprinkles, peanuts, whipped cream, chocolate sauce—-a lot more tasty variety to have the better dessert. This is what Russ Rose must look at day in and day out. Ali Frantti struggling? No problem. In comes Nia Reed, who, in a set and a half of play, sets a career-high with 11 kills, 8 in the second set alone, overcoming a 16-9 deficit and changing the entire feel of the match. Haleigh Washington took over, with her 14 kills and hitting nearly .500 on the night. Multiple servers coming off the bench for PSU—you get the picture. That’s a lot of different toppings to choose from.

No. Gillis was even replaced a few times during the match with Grace Loberg, without much change. The Badger left-side players combined for a not-so-great attack line (17-13-67, .060), and without Bates’s defense and serve receive, one would not be able to stomach the following question…..

Injuries. Ugh. The good news is that Wisconsin stays in the NCAA tournament conversation with their only losses coming against Nebraska (twice), Michigan State (twice), Minnesota and Penn State. All of those losses are top-ten losses. Not a bad resume, but a road win needs to come from somewhere. Purdue and Illinois are the last chances the Badgers have to win on the road against tournament-possible teams. Those are in mid-November; more than enough time for the Badgers to prepare.

Coach Kelly Sheffield was very proud of his teams’ defensive effort Wednesday night, but is quoted as saying that “We didn’t get much production from our lefts.” Well said, coach.