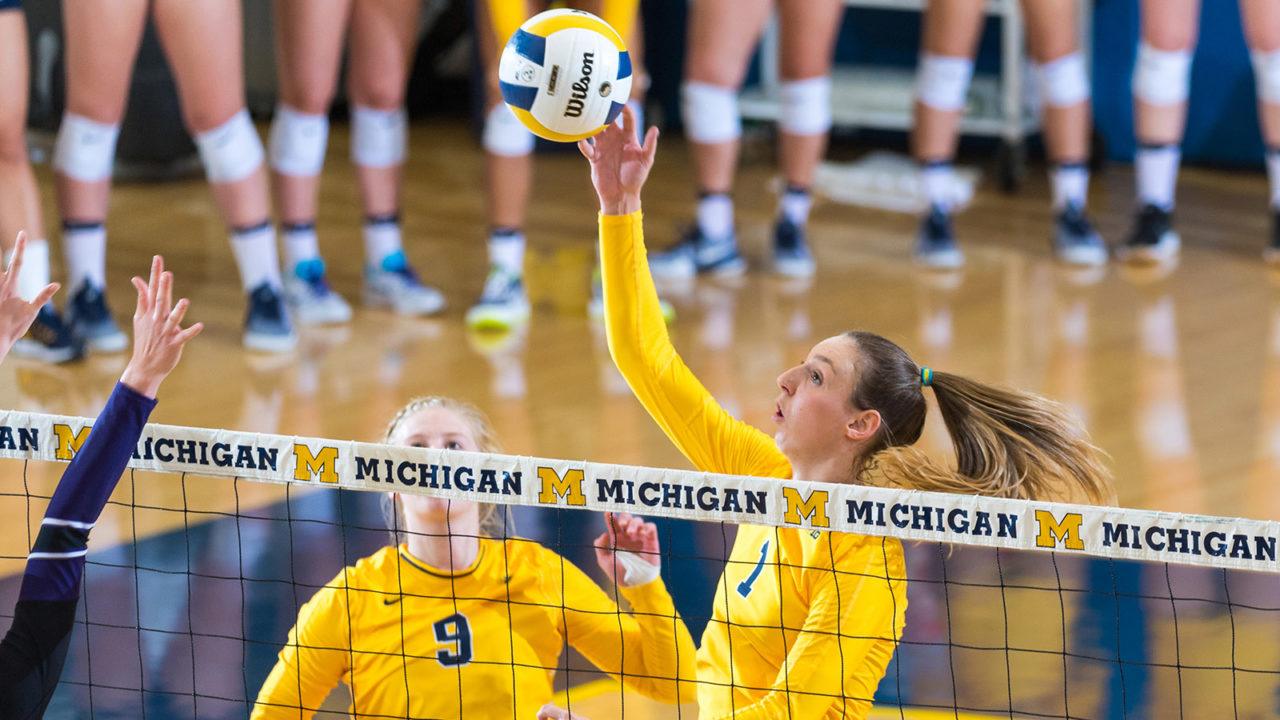 This is the second of a two-part scouting report detailing UM/OSU. Michigan won 3-1. Current Photo via Michigan Athletics

This is the second of a two-part scouting report of a featured match of the week. You can read my initial scouting report here, which details what each team needed to do to win Friday night.

In the first edition of this two-part series, we talked about each teams’ strengths and weaknesses. For the Buckeyes, their defense (over 16 digs per set) start every transition attack. We also got into the balanced attack Ohio State leans on, with five players averaging 2.2 kills per set on the season. Not unlike the Buckeyes, the Wolverines also feature a balanced attack, also having five players average 2.2 kills per set. Unlike the Buckeyes, however, UM’s outsides stay in the back row and are used not only for their back row attacking ability, but their defensive abilities as well. Additionally, a tough preseason schedule also prepares the Wolverines well, with all four of their losses coming to ranked teams.

HOW DID MICHIGAN DO IT?

As noted in the post-match review, Carly Skojdt and Adeja Lambert both finished with 14 kills and 8 digs each. You can’t get more balanced than that from your outsides. Without one being any more important than the other, keying on one leaves the other available for success. Claire Kieffer-Wright, the reigning Big Ten high jump champion for outdoor track and field, also contributed 13 kills and a career-high 9 blocks. With three players in double-digit kills, all of whom hit over .260 on the match, opposing teams will have more and more difficulty shutting down this balanced offense.

I realize that the toughness I alluded to in the original SR was referring to scheduling. However, playing in a large arena such as the Crisler Center is a far cry from playing in the band box that is Keen Arena. A more intimate setting might make depth perception easier on the serve receive. So now we’re talking MENTAL toughness, and who knows how much time UM actually spent in Crisler to work on that depth and serve receive. It was obvious from the beginning that the Wolverines were going to serve tough and keep Ohio State predictable, putting the Buckeyes out of system regularly and leading to five blocks in the first set alone (UM normally averages just over 2 blocks per set).

I have a knack of getting a little volleyball-nerdy from time to time. My nerd switch nearly blew up again when I was watching set four and the epic comeback that UM had when down 17-11. Here’s that stretch run, point-for-point:

Here is where the balance really took hold. You can see by the deciding run above that OSU leaned on Schirmer a bit too much; maybe there isn’t another terminator on the roster for the Buckeyes. I can’t say as I blame them—-Schirmer had 25 kills alone in their four-set win over Purdue in West Lafayette. I count four different Wolverines that contributed a kill during this run. Additionally, Michigan’s block fared well in this run, fueled mostly by tough serving from an unlikely source, freshman Natalie Smith. Such is the dogfight that is the Big Ten schedule, and I look forward to the next edition of UM/OSU.