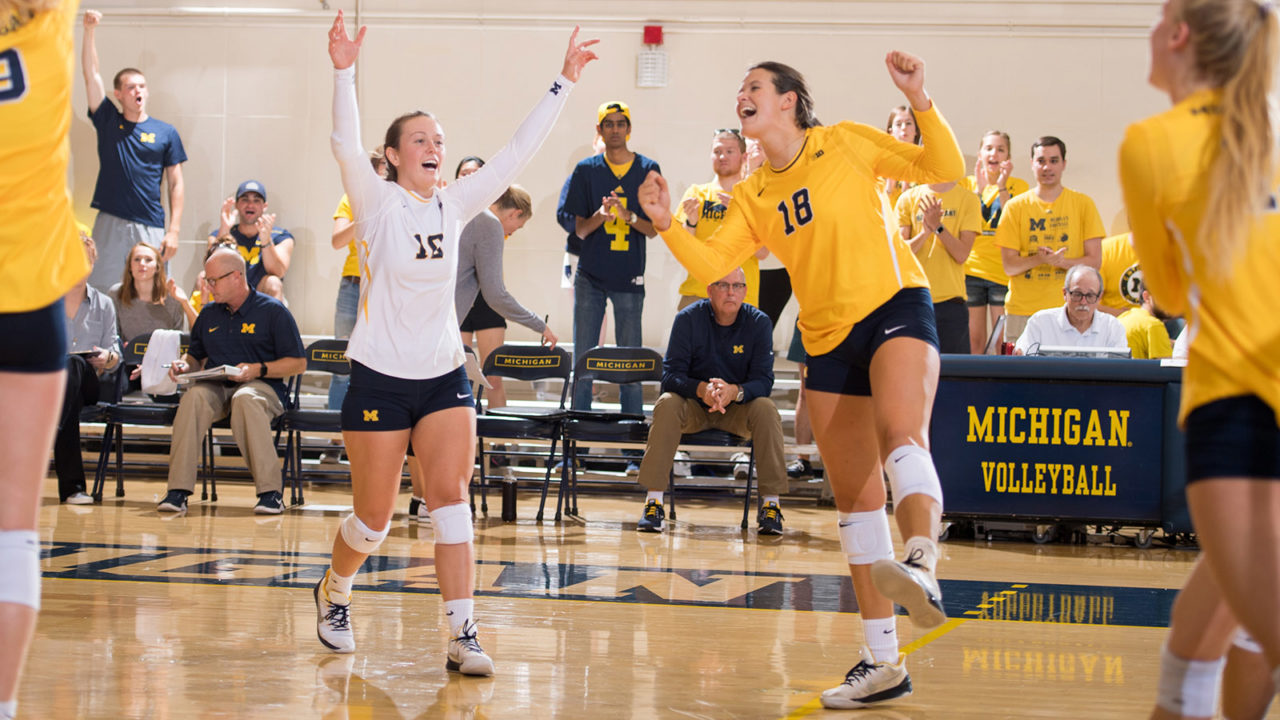 ANN ARBOR, Mich. – As rivalry matches go, none outpace the tradition associated with Michigan/Ohio State, in any sport. So, when planning this match, the UM administration decided to move this particular match into the Crisler Center instead of the intimate Cliff Keen Arena (capacity: 1800).

What they got was a record that more than tripled the previous mark of 2673 set on September 19, 2009 against Oregon State. Coach Mark Rosen estimated that the student section alone “probably would’ve sold out (Cliff) Keen (Arena)”, which normally houses the volleyball program.

But with a big rivalry come big performances, and Michigan came out firing on all cyliders, hitting .344 (12-1-32) in the first set. The Wolverines also needed an epic comeback, down 17-11 in the fourth, to finish off the Buckeyes.

Leading UM statistically included a balance of players. Adeja Lambert and Carly Skjodt (pronounced SCOTT) each had 14 kills and 8 digs. MacKenzi Welsh ran the efficient offense (UM hit .291) with 47 assists and 12 digs. Libero Jenna Lerg led all defenders in the match with 25 digs. Claire Kieffer-Wright had a career-high 9 blocks.

Ohio State, accustomed to having multiple double-digit kill contributors on offense, had only two. Luisa Schirmer, the star of their previous match at Purdue, led all attackers with 17 kills. Madison Smeathers added 12 kills to the offense. Setter Taylor Hughes added a double-double with 43 assists and 12 digs. On defense, libero Hannah Gruensfelder had 24 digs.

ANN ARBOR, Mich. — It was a match unlike any other in the history of the University of Michigan volleyball program.

The Wolverines shattered their previous attendance record, beat their archrivals, and did so with a thrilling comeback in the fourth set Friday night (Sept. 29) at Crisler Center. No. 23 Michigan finished off the Buckeyes by overcoming a 17-11 deficit in the deciding set.

The serving of freshman Natalie Smith, the blocks along the net by her teammates, and the energy of 8,137 fans turned momentum for the Wolverines, who had gone flat after winning the first two sets only to drop the third.

“It was just amazing to see how many came out,” Michigan coach Mark Rosen said of the attendance. “But it was also how energetic they were and the atmosphere that was amazing.

“At one point, we had our players on the video board shouting, ‘Go!’ And the whole place is yelling, ‘Blue!’ I thought, ‘That’s impressive!’ It was just the energy they brought in that fourth set when we needed a comeback, and they certainly played a part in it. It was cool not only to have them here but engaged and into it. They were awesome.”

Rosen noted that the student section for the match at Crisler “probably would’ve sold out (Cifff) Keen (Arena),” alluding to the normal volleyball venue that seats 1,800. The previous record of 2,673 set against Oregon State at Crisler on Sept. 19, 2009 was tripled.

“It’s really great to see all the support in this town,” said Smith. “I’ve never experienced anything like it. I’m from a small town in Texas (Weatherford). The crowd, with everyone cheering for you, gives you so much energy. … There’s nothing like it. It was great.

“It gives you chills whenever you hear that. The fans here are so great. It’s an awesome experience.”

Senior Claire Kieffer-Wright, who had a career-high nine blocks in the match, said “it was a step up” from anything they’d ever experienced at home.

“We’re usually in our humble Cliff Keen with 1,600 maybe and standing room only,” she said with a smile. “I love Cliff Keen, and it’s intimate, and it gets the crowd riled up. It’s a hard gym to play in, but this is a fun one to play in when it’s packed like this.

“It was a feeling you’ll never be able to replicate — a rivalry, a great home crowd. They really rallied behind us there in the fourth set. It just really feels good to have support from the community of Ann Arbor and Michigan students. I’m so happy that it was this way, and I love playing in front of a crowd. It gets me amped up. You could tell it really had an effect on us in the fourth set.”

Smith, who had a career-high three aces on her serves, keyed the comeback.

“Especially for a youngster on our team to serve a run like that,” said Rosen, “and the blocks we had during that run, too. We had three huge blocks on the right side of the court. … That little run was huge.

“I think the serves set up the blocks.”

Smith said: “I have to give a lot of credit to our team. We really picked it up. I think what we’ve been doing in practice, emphasizing getting first-ball kills, we executed that real well. So, we picked it up, finished it, and beat Ohio State.”

Kieffer-Wright said that during timeouts everyone emphasized “pushing through this” and not letting the fourth set get away to force a winner-take-all fifth set.

“The momentum plays came from Natalie Smith at the service line,” said Kieffer-Wright. “And Cori Crocker and MacKenzi Welsh had those great blocks on the right side and just totally shifted the momentum and proved we can do this and push through. We can flip the switch and win.”

There were plenty of Wolverines standouts.

Welsh, a sophomore, had a double-double with 47 assists and 12 digs.

Michigan went ahead for good, 19-18, in the fourth set on a kill by Skjodt (pronounced SCOTT), whose next kill provided a comfortable 23-20 margin. Senior Katherine Mahlke finished off the Buckeyes with a kill for a 25-22 triumph.

“Confidence-wise, we needed to get some momentum,” said Rosen. “This night was really pivotal for that. So, I’m excited about how this can catapult us to moving forward.”

With 43 assists on the night, Taylor Hughes passed Amanda Peterson (’09-12) to claim the eighth spot among the program’s all-time assists leaders with 2,765 career helpers.

SET 1: After tying the score at five to start the match, the Wolverines grabbed a lead they wouldn’t relinquish en route to a 25-15 triumph. Smeathers and Schirmer buried four kills apiece but the Buckeyes struggled offensively behind a .073 hitting percentage.

SET 2: Ohio State started the second set down 9-4. The Scarlet & Gray battled back to lock the score at 17 but it wasn’t enough as Michigan pulled away for a 25-20 decision.

SET 3: The Buckeyes turned things around in the third. OSU totaled 18 kills and attacked .326. Smeathers killed five of her eight errorless attempts for a .625 clip. After the two teams traded points, the Buckeyes went ahead 19-15. Although the Wolverines pulled within one on multiple occasions, OSU fought to take a 25-22 win.

SET 4: Ohio State jumped out to a 17-11 lead to force a Michigan timeout. Back on the floor, the Wolverines tied the score twice before overpowering the Buckeyes for a 25-22 tally. U-M closed the set on a 14-5 run.