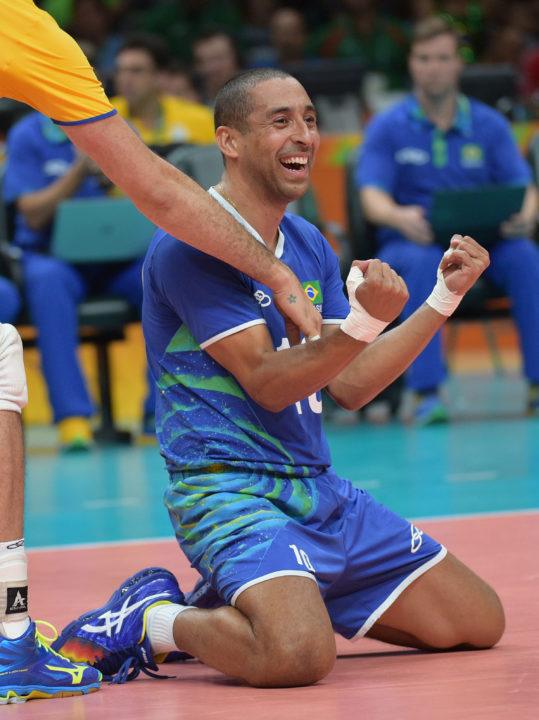 Partnerships with famous soccer clubs are very common and effective in Brazilian professional volleyball.  Take for example the recent creation of Sada Cruzeiro Vôlei, a branch of soccer club Cruzeiro, which was founded in 1921 and has over nine million fanatic supporters. In the last few years alone, Sada Cruzeiro won three FIVB Club World Championships and five Brazilian Superligas. In all that, we can safely assume that having over nine million  supporters transfer their team passion from soccer to volleyball didn’t hurt in decisive home games.

But just how far will people go on passion alone for their favorite soccer club? For two time Olympic gold medalist Sérgio Santos, or “Serginho” (little Sérgio), this meant transfering out from a millionaire club only an year after his Olympic Game’s gold medal and MVP award, and starting a project on his own with a partnership from his favorite soccer team’s organization. Serginho states he has been a Corinthians supporter since childhood, and now that his career is nearing an end, he took it upon himself to start a volleyball branch of one of Brazil’s biggest soccer clubs and promote it from amateur status into professional play. With his team’s win at the Gold Cup on 08/13, he did just that.

Serginho used his influence of over twenty years as a professional player to gather up the help of national teamers Riad and Sidão to strengthen up the roster. However, it all started chaotically for the new team. At the first game of the Gold Cup, on 8/11, they lost a very close game at the tiebreak to Caramuru Vôlei/Castro (26/24, 18/25, 25/22, 20/25 and 15/13), a huge upset, since Castro was relegated from Superliga last season and Corinthians is filled with national teamers.  They  bounced back the next day for an easy 3-0 win (25/17, 25/10, and 25/15) against Radio Clube/AVP.  The last game of the tournament (08/13) was a winners takes all situation, against also a huge soccer team club, Botafogo. Corinthians used its heavy and servicing, which in turn led to effective blocking, to grind out a 3-0 win (20/25, 20/25, 30/28, and 19/25). Serginho played well in all three games.

To fully understand the meaning of this promotion, though, it is necessary to explain to those unfamiliar with Brazilian sport culture the significance of the Corinthians brand. Arguably Brazil’s most popular soccer club, it has gathered over 30 million supporters since its humble beginnings in 1910. A two times world club champion, it has a special place in Brazilian culture, identity, and lore. Known as the people’s club, due to its humble working class beginnings, its supporters state that they are more than a team, Corinthians is a way of life: The Corinthians’ Way. In other words, it doesn’t matter whether at a professional soccer competition or youth basketball, expect Corinthians supporters to flood every single one of the team’s games.

Captained by a fanatic supporter Seginho, and also in this case, a two time Olympic gold medalist and and Olympic Game MVP, and with the additional support of over 30 million fans, expect this team to make a lot of noise at this year’s Superliga.