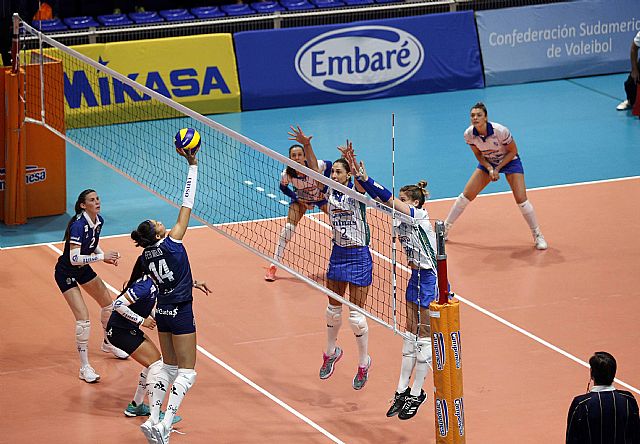 There were no surprises on the pool stage and semifinals of the South American Club Championship as Camponesa/Minas and Sesc/RJ completely demolished its opponents on their way to the finals, which will be played this Saturday.

Both Brazilian clubs were heavy favorites as most of South American female leagues are in their early stages of development, with still amateur levels of competition. This disparity n can be seen by their game scores:

Minas‘ Road to the Finals

Sesc‘s Road to the Finals

Here is what both teams had to say of their finals match up:

“We have the advantage of playing home, and we are dealing with that the best way possible. We of course, want to win a berth the Club World Championship. Our team is slowly growing in the competition. Our squad needs to be tough, serve well, and have our defense play a good game. We are very focused.” Minas‘s Rosamaria Montibeller

“There are no favorites. We are the best two teams of the tournament. We know the arena will be packed, the crowd will be there. Let’s hope that will be a great volleyball game.” Sesc‘s Fabiana Alvim

This will be Minas‘ first trip to the finals after 18 years, while Sesc will play for its 4th straight title. The winning team will be awarded a spot at the 2018 FIVB Club WCH. Unfortunelly for Hooker, USA’s Destinee Hooker won’t be available for the match as she recently underwent a minor groin surgical procedure, which makes Sesc heavy title favorites despite its earlier loss to Minas in Superliga play.

So what happened with Minas already having to kiss goodbye only because they were playing without Hooker?? Hooker is not playing well and hitting around 30% which is not good for a OPP. Rosamaria played as OPP and she played much better than Hooker has been playing all season. I think Minas should stick with this line-up Rosamaria as OPP.