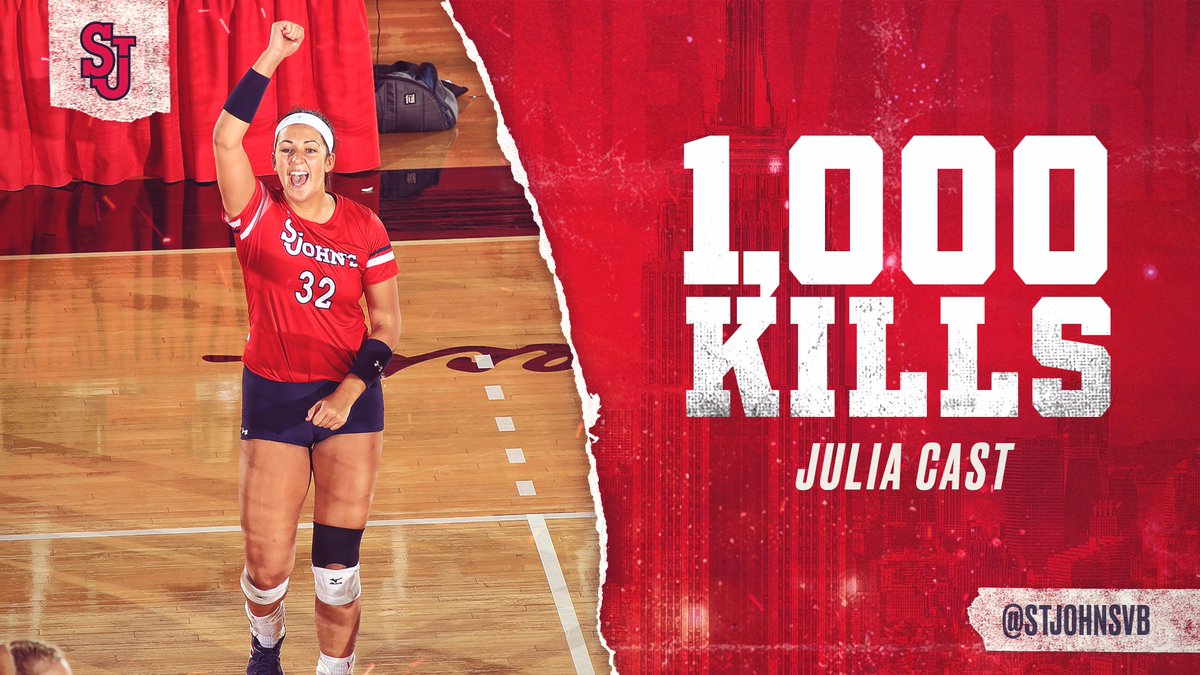 Seton Hall outblocked SJU 11-4 and outhit the Red Storm .306 to .192 en route to a sweep, however, dampening the historic night slightly.

While Cast was the top scorer for St. John’s, Seton Hall junior middle Abby Thelen was the top hitter on the night with a 15 kill effort and a .444 hitting performance. Senior outside hitter Dominique Mason followed with 10 kills and 11 digs. Junior outside Caitlin Koska put up five blocks, while senior libero Sarah Kenneweg was tops in the backcourt with 13 digs.

St. John’s built a 15-10 lead in Set 1 as Wagner downed four kills and five other players chipped in putaways. Down 17-11, Seton Hall mounted a comeback, slicing the deficit to one at 17-16 with help from three Red Storm errors and a pair of blocks. SJU pushed the lead to four at 23-19 as the Pirates committed two errors. SHU scored five straight, including two Thelen putaways and an ace by Haylee Gasser, to earn the first set-point try at 24-23. A pair of Cast kill kept St. John’s in the set and gave the Red Storm its own set-point attempt at 25-24. A pair of Madison Salkowski blocks put SHU back on top 26-25. Kills by Thelen and Mason eventually capped the set at 28-26 for the Pirates.

The teams tied 11 times, last at 14-all, before Seton Hall pulled away in Set 2. The Pirates used a 6-1 run to vault ahead 20-15 as four different players turned in kills. A Danisha Moss kill stopped SHU momentarily, but the Pirates scored four straight, last on a Gasser ace, to take a 24-16 lead. A solo block by Koska sealed the 25-18 win three points later.

Seton Hall cruised to an 8-2 lead in Set 3 as St. John’s made three errors and Thelen added a kill and a block. Later, a 4-0 run including two blocks, pushed the Pirate advantage to eight at 15-7. The Red Storm scored three straight, two on putaways by the night’s star, Cast, to pull within five at 15-10. St. John’s would get no closer, however, eventually falling 25-18 on a Mason kill.

Cast, a senior from Westbury, N.Y., led the Red Storm with 14 kills for the match and now has 1,111 in her stellar career for the Johnnies. The veteran ranks second in the conference in kills per set and also top 10 in the nation in total kills. Hanna Wagner was very efficient all match with nine kills and a .571 hitting percentage, while also adding two blocks.

Erica Di Maulo continues to impress on both sides of the ball with the sophomore’s 10th double-double of the year with 39 assists and 11 digs against the Pirates. Danisha Moss added six kills on a .357 clip and tacked on two blocks as the Toronto native has 418 in her career.

A newcomer from Woodlands, Texas, Kayley Wood tallied nine kills, second-highest on the squad and also collected four digs. For the fifth-consecutive match, Amanda Sanabia recorded at least 11 digs with 13 to lead the back line for the Johnnies.

For the match, Seton Hall hit at a .306 clip and held the Red Storm to a .192 hitting percentage, while out blocking the Johnnies 11 to four. St. John’s opened up the rivalry match with a 7-3 advantage on three kills by Wagner and an ace by Delaney D’Amore. Following the quick start, the Red Storm stretched its lead to 17-11 after back-to-back kills. After a 23-20 advantage for the Red Storm, the Pirates recorded four-straight points before winning the opening set with a 28-26 victory. Wagner finished with six kills, while Di Maulo dished out 16 assists and collected six digs in the marathon first set of the night.

The next set began closely contested as each school exchanged points with the score even at 10 and then again tied at 14. From there, the Pirates closed the set out on an 11-4 run as Seton Hall won four of the last six points to take a 25-18 victory in the second. Cast led all players with six kills in the second stanza, while Moss and Wood each tacked on three kills.

The Pirates opened up an 8-2 advantage to open the third frame and then took a 15-7 lead. The Red Storm looked to halt the momentum with a 6-3 run to cut the Pirates’ lead to 18-13, but Seton Hall closed out the match with a 25-18 victory. Abby Thelen led the offense for Seton Hall with 15 kills on a .444 hitting percentage for the match.

The Red Storm will continue its three-game road trip at No. 17 Creighton next Friday, before heading to Providence to take on the Friars on Sunday to close out the road trip.

The Hall has now played every BIG EAST team and is 6-3 and in sole possession of third place in the conference at the half way mark.

SET 1:
Seton Hall got off to another slow start, and trailed for most of the first set.  Trailing 17-11, the Pirates scored five straight, and a block by Dominique Mason (Chicago, Ill.) cut the Red Storm lead to one, 17-16.  St. John’s however, maintained a slim lead before eventually ballooning their advantage to 23-19.  But The Hall charged back with five straight points, and a kill by Thelen provided its first lead of the match, and put it in set point, 24-23.  The Red Storm responded with two straight points to enter set point itself, 25-24.  Back-to-back Pirate blocks put The Hall back in front, 26-25.  After St. John’s staved off yet another set point, the Pirates finally took control with the score tied at 26.  A kill by Thelen, gave Seton Hall its third set point, and the ensuing kill by Mason ended the epic set in its favor, 28-26.

SET 2:
The second set was close, until the Pirates took control late.  With the score tied at 14, The Hall scored four straight, and a kill by Haylee Gasser (Mission Viejo, Calif.) put it in front, 18-14.  From there, St. John’s never got closer than a three-point deficit as Seton Hall won set two, 25-18.  The Pirates had a match-high .378 attack percentage in the second frame.

SET 3:
The Pirates dominated the third set, leading wire-to-wire.  The Hall scored the first five points of the clinching set in route to another 25-18 victory.  Mason and Thelen had five kills apiece in the final set.

Up Next:
The Pirates will return to action on Friday, Oct. 20 when they travel to Providence.  Match time is scheduled for 7:00 p.m. ET.