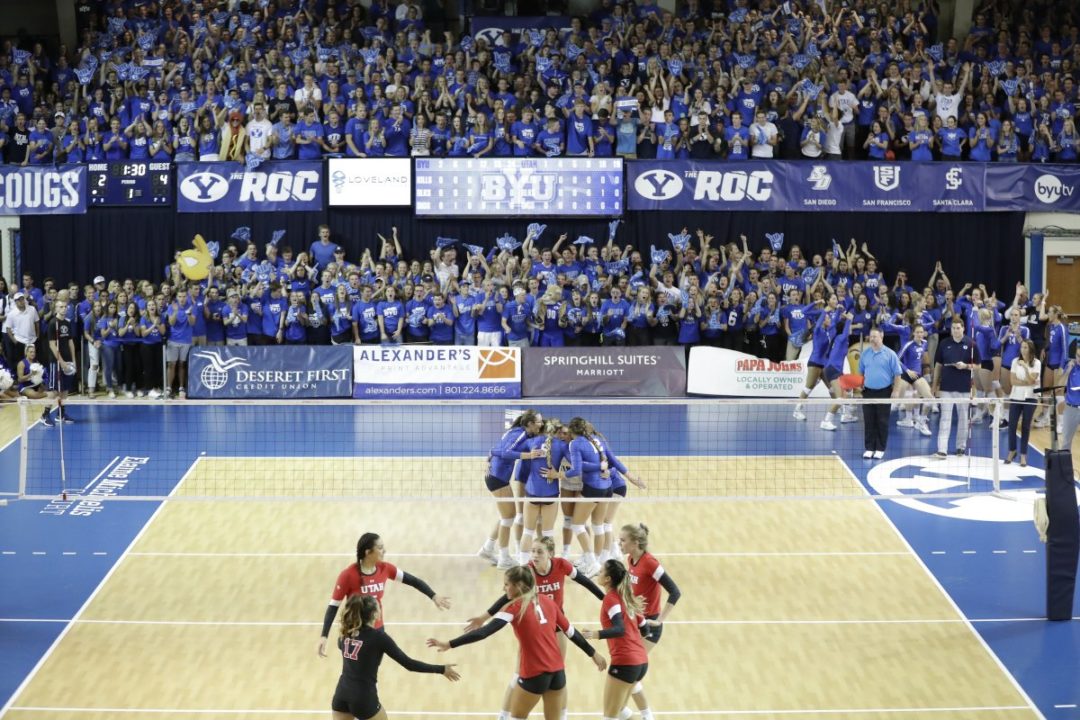 In front of a record crowd of 5,472, the Cougars swept away instate rival Utah in the Deseret First Duel. With the win, BYU moves to 9-0, matching its 2016 start, and ups its all-time series record with the Utes to 71-30, including a 41-10 mark when playing in Provo.

Roni Jones-Perry notched a match-high 13 kills, while hitting .333 and adding an ace and a block. That .333 effort was the lowest among the Cougars’ six hitters with a kill. Heather Gneiting was the best of the group at .636 (7-0-11), while Kennedy Eschenberg hit .615 (9-1-13) and put up a team-leading four blocks. McKenna Miller served up two of the team’s five aces and chipped in eight kills. Lyndie Haddock-Eppich posted a 31-assist, 10-dig double-double and three blocks, while libero Mary Lake pulled up 12 digs.

Utah struck first with a 4-1 run, including two Drews aces, in Set 1. BYU rallied to tie it up at 8-all with two putaway apiece by Jones-Perry and Miller. The Utes maintained the advantage at 14-11, before a 9-2 surge gave the Cougars a 20-16 lead of their own. Four Utah miscues and two Miller kills aided the rally. Utah pulled within one at 21-20, but could not break through. BYU closed out the comeback with a 4-0 run, capped by a Jones-Perry putaway and another Ute miscue.

The Cougars carried the momentum into Set 2, running away to an 10-3 advantage. Three Jones-Perry terminations and three Utah errors lifted BYU to the seven-point lead. The Utes never got closer than five the rest of the way (11-6). A kill and a block by Haddock-Eppich clinched the 25-14 win.

The teams tied seven times in Set 3, last at 9-all, before BYU broke away with a 5-0 run, featuring two kills and a block by Eschenberg. Utah cut the margin to three at 17-14 on a Gauta ace, but the Cougars responded with a 9-3 run to wrap up the match. Back-to-back aces by Miller made it 23-15 and a Gneiting kill gave BYU its first match-point try. A service error kept the match going, before Eschenberg closed the door.

The Cougars will look to move to 10-0 to start a season for the first time since 2012 (15-0) at Weber State on Saturday. The Utes play host to Utah Valley on Friday in Salt Lake City.