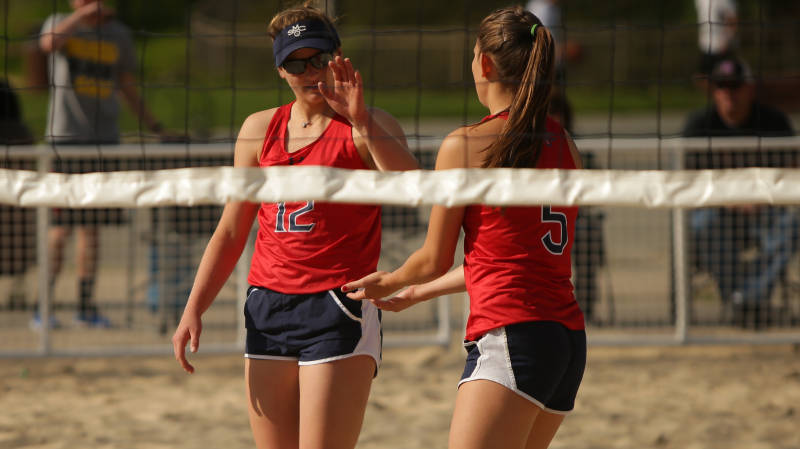 The 103-match winning streak of USC beach volleyball #1 pair Sarah Hughes and Kelly Claes came to an end on Saturday. Playing their final game of the day on Manhattan Beach at the USA Volleyball Collegiate Challenge, the top-ranked USC Trojans carried the day 4-1, but that singular loss was a big one.

The first set looked like the game was going to be another runaway from college volleyball’s best pair, as they dominated their opponents from St. Mary’s.

But then Knudsen and Rund caught fire in the 2nd set and became just the 3rd pair this season to steal even a single frame from Hughes and Claes.

In the final set, it took extra points to get the win, but the young Gaels pair had enough to hang on over their superstar opponents.

Claes and Hughes had only even gone to 3 sets on two other occasions this season. In both of those instances, against Utah’s Adora Anae and Dani Burton (12-21, 22-20, 15-7) and then against Loyola Marymount’s Savannah Slattery/Sarah Sponcil (18-21, 21-10, 15-3), the loss came in the first set, at which point Claes/Hughes roared back and unleashed a fury upon their opponents.

But on Saturday, they had no such luck, fading at the end of their 5th match in 2 days long after the team result had been decided.

Knudsen/Rund went 2-1 on the day, which pushes them to 19-3 overall this season.

We just beat the USC, the #1 team in the nation…. ??? pic.twitter.com/hs9zrpWWYe

Kelly and Sara drop their first match in almost 2 years. Congrats to @SMCVolleyball's Lindsey Knudsen and Payton Rund on the W #FightOn ✌??