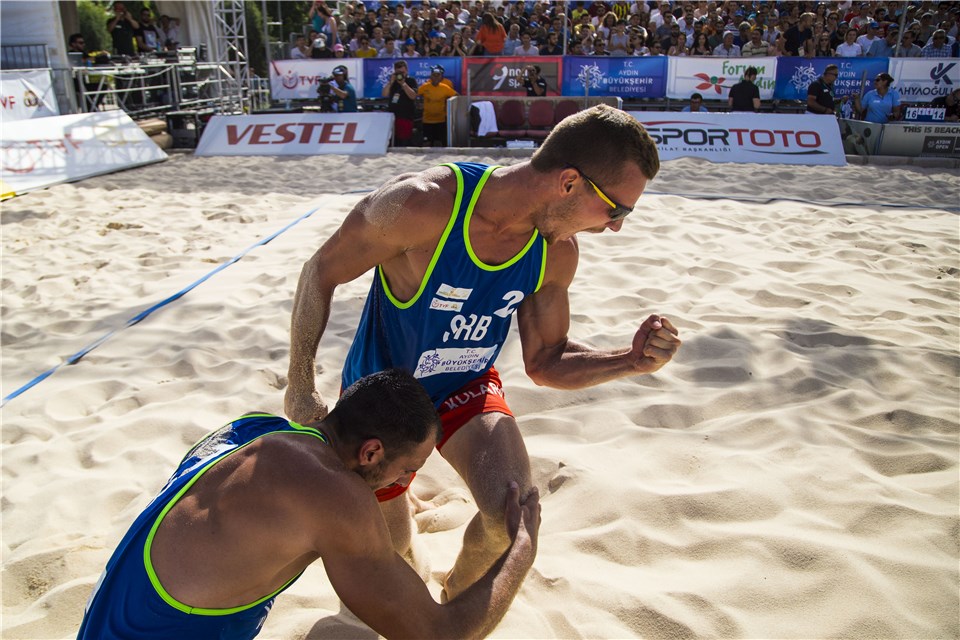 Serbia's Stefan Basta/Lazar Kolaric, which started the tournament in the qualifying rounds, won their first FIVB World Tour gold medal at the Aydin One-Star, while Sweden's Kristina Thurin/Susanna Thurin made history with a bronze on the women's side, for their country's first ever FIVB World Tour medal.  Current Photo via FIVB

Basta/Kolaric, earn their second straight podium finish, following a runner-up effort at the Lucerne Three-Star last week. Meanwhile, the Iranians picked up their second FIVB medal as a duo, following a bronze at the Satun One Star on April 11.

Rounding out the men’s podium were Ruslan Bykanov/Maksim Hudyakov of Russia, which denied homestanding Hasan Mermer/Safa Urlu the honor of the bronze with 23-21, 21-14 win.

On the women’s side, a lot was still be to be decided as the day began with both semifinal and podium matches on slate for Sunday, but one thing was for certain, a Swedish team would be going home with a medal for the first time in the country’s history on either the men’s or women’s side.

Dabizha/Mastikova bested the Thurin twins and Leila/Maylen downed Yoken/Simonsson in straight sets in the semis, relegating the Swedish sides to compete for a still historic bronze.

In the championship match, it was Cuba’s Leila/Maylen that secured the top spot with a 21-18, 21-16 win. This is just the second FIVB event for the Cubans, following a ninth-place effort at the Bangkok Open last week.

Meanwhile, Dabizha/Mastikova earned their third medal of the season following gold at the Langkawi One Star (April 29) and bronze at the Phnom Penh Two-Star (May 6).