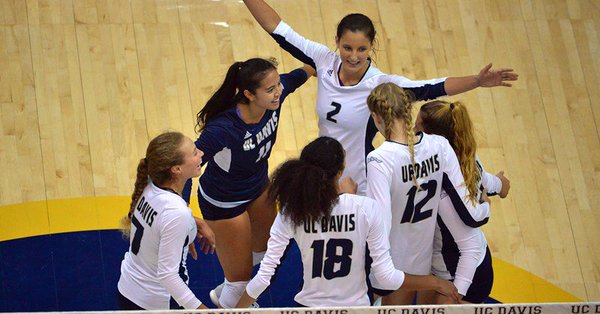 Both UC Davis and UC Irvine collected sweeps Saturday in Big West play. The Aggies took town Cal-State Fullerton at home while the Anteaters remained in the Big West title chase with a sweep of UC Riverside. In the nightcap, Hawaii stayed within striking distance of #13 Cal Poly with its four set win over Cal-State Northridge.

Hawaii remained in the hunt for a Big West title Saturday night when it knocked off Cal-State Northridge in four sets.

The Rainbow Wahine raced out to an early 9-5 lead and would not look back. Hawaii would build its lead to as many as seven at 20-13 and finished off the Matadors, 25-18 in the opening set.

The second set belonged to Northridge. The Matadors jumped on Hawaii early and maintained a comfortable lead at 15-9 midway through the set. The Rainbow Wahine tried to rally, but it was too late as Northridge evened the match with a 25-17 win.

Hawaii opened with a 9-2 run in the third to regain the momentum. The Matadors did make it interesting as they cut the deficit to 19-17, but Hawaii held them off for a 25-20 win.

The fourth set was similar to the third as Hawaii again ran out to a big advantage. The Rainbow Wahine led 19-10 before Northridge trimmed the lead to three at 22-19. Hawaii was able to put the Matadors away by taking three of the final four points, as it took the fourth set, 25-20.