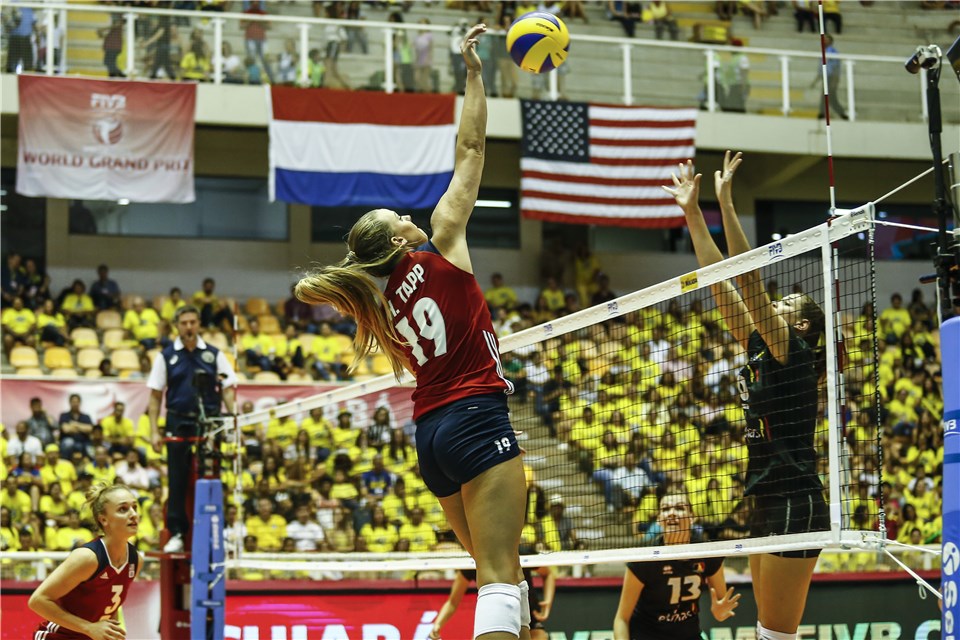 A big blow to Team USA and Italy’s A1 Firenze revealed itself when the team confirmed on its official Instagram page that, according to image exams done in Italy, Hannah Tapp, who was recently injured in the team’s  Italian Cup quarter-finals match-up against Conegliano, has suffered a right-knee patellar tendon partial tear. The Team USA’s middle blocker will now return to the USA where she will undergo surgery to repair her knee.

Italian website Ivolleymagazine.it had hinted last week at the possibility that Tapp had suffered a season-ending injury, which turned out to be true.  Firenze, who recently announced Giovanni Caprara as its new head coach, is already looking at the transfer market for a replacement for Tapp.

The 22-year-old 6’3″ Tapp is a University of Minnesota Graduate (Class of 2016). During her collegiate career, she was named an AVCA All-America Second-Teamer in 2016 and AVCA All-America First-Teamer in 2015, while also helping University of Minnesota reach consecutive NCAA semifinal appearances in those same two years. She was nominated twice for the USA Volleyball Collegiate National Team for competitions in China.

Upon graduation, she joined Germany’s SC Schweriner for a season before making the move to Italy’s Firenze. She received her first call up for Team USA in May, and was part of the team’s 2017 FIVB Grand Prix roster. Her twin sister, Paige Tapp, also joined her on the team, and is playing professionally in Stuttgart.

Both Tapp and Firenze took to social media to comment on the news:

Translation:  Firenze announces that clinical investigations have shown a partial rupture of the Hannah Tapp‘s right-knee’s patellar tendon.The twenty-two-year-old American was injured in the last point of the third set of the Italian Cup match against Conegliano last December 30, and today will return to the United States, where in the coming days she will undergo a routine surgery in agreement with the staff doctor of  Team USA’s doctors. Get well soon Hannah!