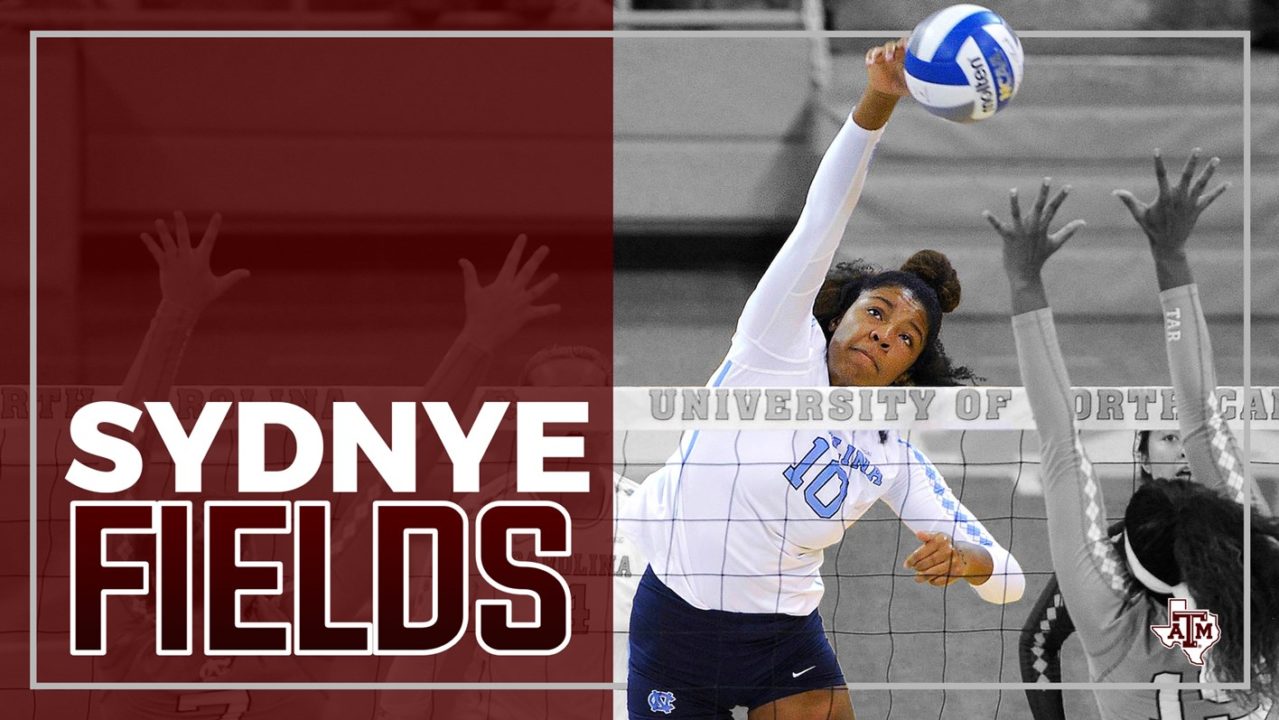 Former North Carolina middle blocker and right side Sydnye Fields is transferring on to Texas A&M for the 2018 season. A redshirt junior-to-be in the fall, Fields will have two years left of play and is set to be immediately eligible for the upcoming season.

The move comes at a position of need for the Aggies in terms of impact in the middle. They already had depth with five others at the position for 2018, but lost 2016 AVCA All-American Kaitlyn Blake earlier this offseason to medical retirement. Fields could slide right into the starting role that Blake departs in 2018 and add experience, as the other five middles combine for just four varsity letters.

“Especially after losing Blake, Sydnye is going to have a huge impact in terms of our needs and depth.  Her engaging personality and experience will be key for this group,” Texas A&M head coach Laura Kuhn said in the team’s release of the transfer. “We could tell from day one she is someone that wants to have a positive impact both on and off the court.”

Of course, Fields also adds versatility with her play on the right pin. She brought that to North Carolina in her three years and two of play. After redshirting in 2015, she made quite the splash in 2016 in helping her team to an ACC title and a Sweet 16 berth. She did miss a month of the season with injury, but in 22 matches logged 69 kills (0.95 per set) on a .191 mark and 101 blocks (1.38 per set). Blocking is her calling card and she even had an individual match with a school record 15 block assists.

Her playing time dwindled in 2017 as a redshirt sophomore though as she appeared in just 15 matches and 45 sets, though still averaged 0.96 blocks per set.

“When I was originally going to college, I wanted to go far away from home just to experience something different, and now having been both far away and close, I love being close,” Fields said in the release. “I decided to come to Texas A&M just because when I came on my visit I felt really welcomed by all the people here, not just the team and the coaches, but also the other people who work within athletics and the administration. I also felt like I had a good connection with Bird.”

Prior to her stint with the Tar Heels, the Missouri City, Texas native attended Ridge Point High School. On the clubb side she played with Houston Juniors Volleyball Club and was ranked as the #50 recruit per PrepVolleyball.

“I’ve known Sydnye since she was in high school; she was one of the top recruits,” Kuhn added in the team’s release. “She can be an impact player in the middle or on a pin, and that versatility is going to be huge for us. She has played at a high level, and her experience coming from ACC to SEC play will be valuable. Her overall athleticism and ability to play multiple roles is going to be a great addition for us. We are excited to have her in our gym.”

Texas A&M finished last year at 10-15 and 7-11 in the Southeastern Conference (SEC), a step back from a 21-victory season in 2016. That said, they do have some momentum coming into 2018 after they ended 2017 on a three-match winning streak, hired a new head coach in Laura ‘Bird’ Kuhn and had an international foreign training tour this offseason. Fields will look to add to that momentum as the Aggies look for a strong campaign in the fall.