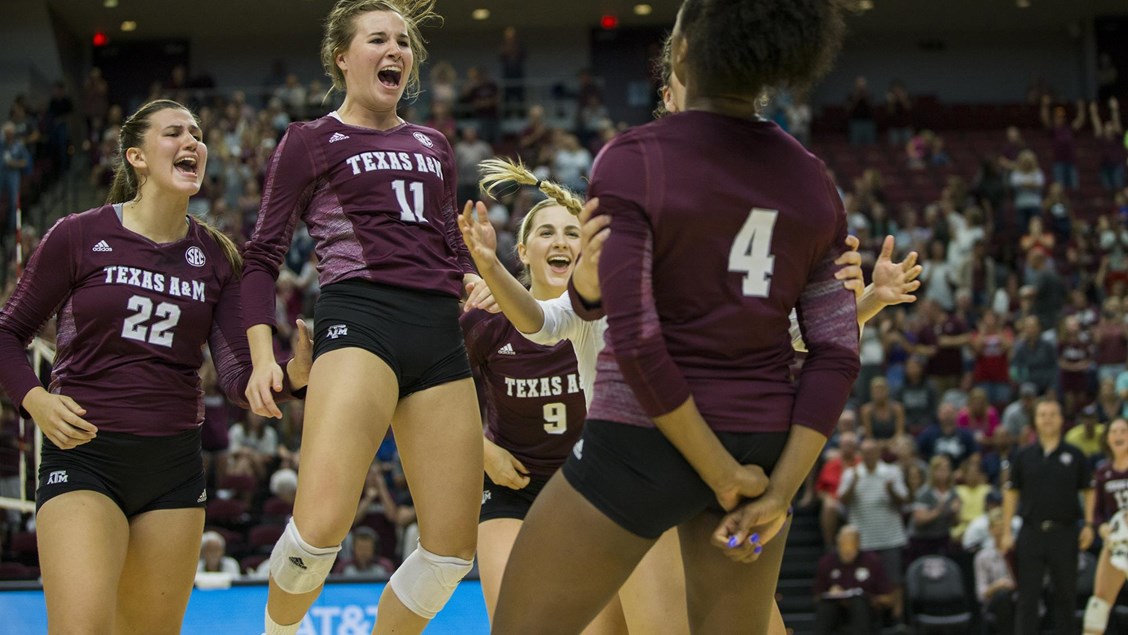 Kuhn, in her first year as a head coach and the sixth head coach in Aggie volleyball history, makes her debut in front of the 12th Man at Reed Arena when the Aggies play host to TCU in an exhibition match on Satumatcherday, August 18.

“We are excited to be home in front of the 12th Man when we take on TCU in an exhibition match in August,” said Kuhn, a former American Volleyball Coaches Association (AVCA) Assistant Coach of the Year and previously the associate head coach and recruiting coordinator at the University of Kansas. “It’s cool for me because I know their coach and I’m familiar with TCU after having been in the Big 12 Conference, so it will be fun to have them here as my first home match and to have our team together at home as a new unit.”

A&M opens the regular season on the road as the Aggies will be away for the first two weekends before returning to Reed Arena to host the Texas A&M Invitational on Thursday and Friday, Sept. 6-7. The Aggies open the tournament against Pepperdine of the West Coast Conference on Thursday, Sept. 6 at 7 p.m. A&M will play two matches on Friday, facing Nicholls State of the Southland Conference at 10 a.m. and then concluding the tournament with the feature match at 7 p.m. against Missouri State, the reigning Missouri Valley Conference regular season and tournament champion and a NCAA tournament participant last year.

“The variety in that tournament is exciting for me not only because scheduling was a new challenge for me, but because we got a good mix of what we were looking for,” Kuhn said. “It will be good to see how our team responds to the different competition that weekend and also to see how far the team has developed over the first two weeks of the preconference schedule. Plus with it being at home, you know it will be high energy.”

To host the tournament on those dates also was crucial for recruiting purposes, as it leads into A&M’s home football game against Clemson on Saturday, Sept. 8.

“It is going to be electric around here for sure. Anytime you can combine two events like that and experience that fall vibe is huge,” said Kuhn, who got a scaled-down sense of Aggieland’s electric atmosphere during the football team’s spring game earlier this month.

“Being here on that spring football weekend and not having any other event besides just having our recruits on campus was awesome. So with us competing on the same weekend as a home football game is going to be a whole different level, so that will be very fun.”

The Aggies then hit the road for the final weekend of non-conference play before opening the SEC portion of the schedule with a two-match homestand against Arkansas (Sept. 19) and Georgia (Sept. 23).

“Being able to open conference play at home is going to be huge since we will have been at home only one weekend during preconference,” Kuhn said. “It will still have a fresh vibe to it, and it will be a good jump start for us, being at home in front of the 12th Man and getting after it as we begin SEC play. It is going to be very good for our team in general, and it obviously will be special for me.”

The Aggies also will have home matches against Auburn (Oct. 12) and Tennessee (Oct. 19), as well as Kentucky (Oct. 21), which advanced to the NCAA regional finals last year and finished with a No. 4 RPI (Ratings Power Index). In addition, A&M will host Alabama on Oct. 26, and on a home football weekend, the Aggies will play host to both South Carolina (Nov. 9) and Ole Miss (Nov. 11), the winner of the 2017 National Invitational Volleyball Championship. The Aggies close out the regular season and celebrate Senior Night against LSU on Friday, Nov. 23, the night before a home football game against the Tigers.

“The SEC schedule in general is going to be top-to-bottom good competition,” Kuhn added. “I know some teams are going through a similar transition as us, but Georgia, Alabama, Arkansas, Auburn, all of those teams are on the rise. For me it is exciting to host those caliber of teams.

“Overall, we are just excited to compete. I’m excited to see how the team does. Fall is always the best time of year, and it will be fun to see this team and compete with them.”

Spring training ended on April 25, and after finals end on May 8, the team will regroup for two days of practices before departing College Station on May 11 for a 10-day training trip in Europe. The Aggies report for fall preseason training on August 7.

The full schedule will be announced soon, and all times will be added once the SEC releases the television schedule.

Season tickets will be available for purchase in the near future at 12thManFoundation.com.