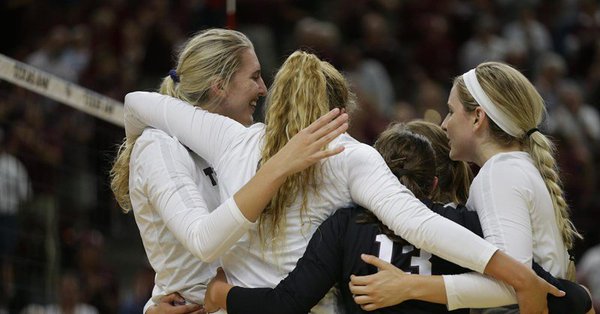 COLLEGE STATION, Texas — Texas A&M (12-11, 5-6 SEC) plays its second match of a three-match road swing Wednesday as the Aggies take on Auburn (10-11, 3-8 SEC) in Auburn. First serve is at 7 p.m. at Auburn Arena, and the match will be televised on SEC Network with Dawn Davenport and Missy Whittemore calling the action.

Texas A&M is tied with Alabama for sixth place in the Southeastern Conference following a hard-fought 3-2 (23-25, 25-15, 25-22, 22-25, 15-8) setback at No. 24 Missouri on Sunday. It was A&M’s fifth consecutive five-set match as well as the Aggies’ school-record eighth five-setter in SEC play and record-setting 10th five-set match of the entire season with seven scheduled matches remaining. A&M’s most recent match that did not go five sets was a sweep against Auburn on Oct. 12 at Reed Arena in College Station.

While A&M will be looking to end a four-match losing skid, Auburn will be aiming to build on its two-match winning streak after defeating Ole Miss, 3-2, on Friday and sweeping Arkansas, 25-17, 25-20, 30-28 on Sunday at Auburn Arena.