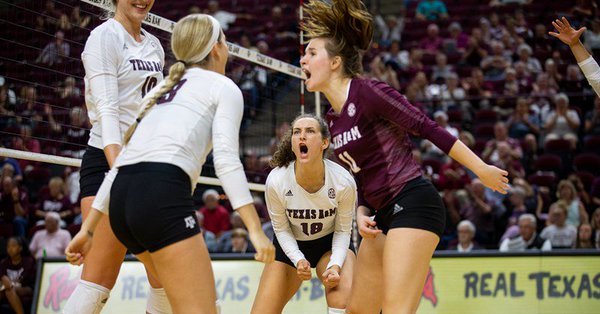 COLLEGE STATION, Texas — Texas A&M (10-5, 3-0 SEC), riding its best-ever start in Southeastern Conference play, puts its undefeated SEC record on the line Friday, when the Aggies take on 11th-ranked Florida (13-3, 4-0 SEC) in Gainesville. First serve is at 6 p.m. (7 p.m. ET) at the Exactech Arena at Stephen C. O’Connell Center, and the match will be televised on SEC Network with Melissa Lee and Missy Whittemore calling the action.

Led by sophomore setter Camille Conner’s triple-double and double-doubles by junior outside hitter Hollann Hans and senior libero Amy Houser, Texas A&M improved to 3-0 in SEC play for the first time since joining the conference with a come-from-behind 3-2 (24-26, 25-21, 20-25, 25-23, 15-13) victory at LSU on Sunday. It was the Aggies’ first true road victory this season, and they extended their winning streak to a season-best three matches.

Florida, the two-time defending SEC co-champion, won its ninth consecutive match and remained undefeated in conference matches with a 3-0 (25-20, 25-20, 26-24) victory at Alabama on Sunday. Taelor Kellum had a match-high 12 kills, and Rachael Kramer had 10 kills while hitting .556 and also added six blocks as the Gators notched their fourth straight sweep.