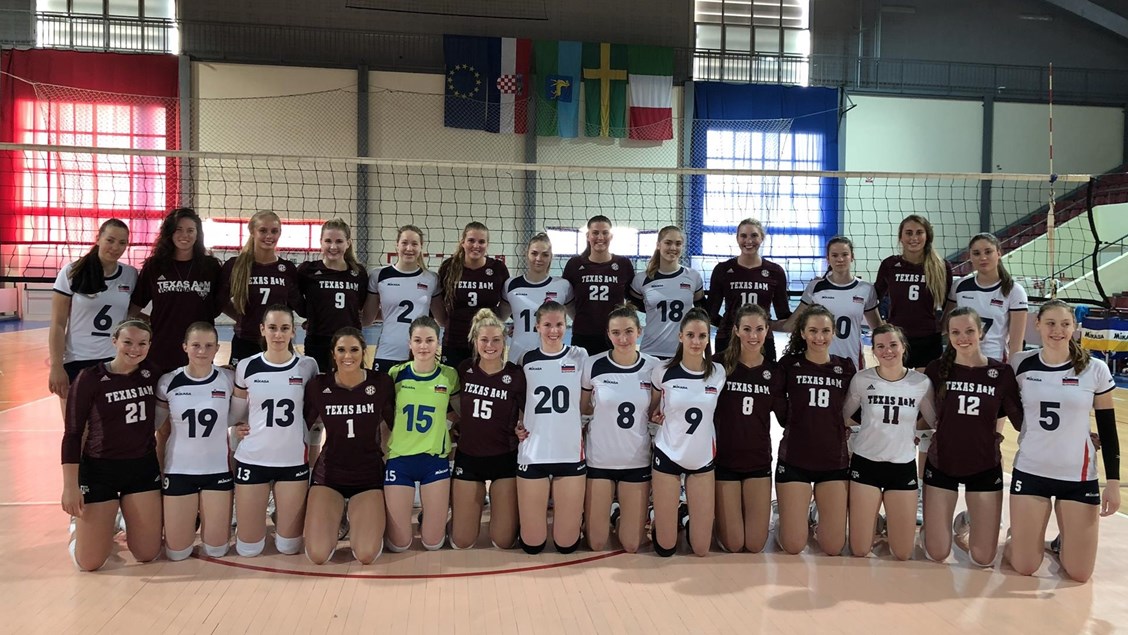 The Texas A&M volleyball team picked up another victory during its European training tour, defeating the U19 Slovenia National Team, 3-1 (25-20, 22-25, 30-28, 25-13) today at the Mate Parlov Sport Centre. Current Photo via Texas A&M Athletics

The Slovenians spotted A&M a 7-0 lead to open the first set but quickly got back within 8-7. The Aggies then scored five unanswered points to go up, 13-7, but they could not shake the pesky Slovenians, who got back within a point at 14-13. A&M then went on a 6-1 run to go ahead, 20-14. Slovenia managed to get within 20-17 but could get no closer. A kill down the line by Samantha Sanders followed by a block by Hollann Hans and Mallory Talbert put the Aggies at set point, 24-18. Slovenia, however, fought off two set points and got within 24-20 before a service error ended the set.

A&M trailed by as many as four points early in the third set but continued to chip away at the deficit. The Aggies later rallied for six consecutive points to break away from a 15-15 tie and take their first set of the frame, 21-15. A&M later held a five-point cushion and was serving for the set at 24-19 before Slovenia fought back and tied the score at 24-24. The teams began to trade point for point, resulting in four more ties before a Slovenian service error and an attack error gave A&M the 30-28 win and a 2-1 lead in the match.

After Slovenia served an ace to open the fourth set, the Aggies rallied for eight unanswered points. Slovenia would get within 13-8 before A&M mounted a 10-0 run to build a commanding 23-10 advantage. A kill by Brookah Palmer put the Aggies at set point, 24-10, but the Slovenians scored three consecutive points before an attack error ended the set and the match.

Tomorrow morning the team will head to Venice, Italy, and stay there for the night before heading to Milan on Monday. The Aggies close out their tour with a match against Club Italia, consisting of the best junior players in Italy, on both Monday and Tuesday at the Italian Training Center

Fans will be able to keep up to date on the Texas A&M volleyball team’s travels on 12thMan.com and Facebook as well as on Twitter and Instagram by following @AggieVolleyball.

On what she was most impressed with…

“What I’m impressed with most about this match was the response after the first set. We are at a point in this trip where the days are long, and we are doing a lot with them, but this is where we mentally challenge them. So that response going into the second set was good. We switched it up and we went to a 6-2 towards the end. We just kind of threw it at them. We told them we are going to challenge them, and they are embracing it.

On passing the halfway point of the trip…

Breaking the halfway point, it has been cool to see them on a day-to-day basis and all of us hanging out, the travel and the bus trips. I always love the bus rides. That is when you see all the goofiness, but it has been cool. Everyone is growing together and you sit with different people, so I see that happening with them and that is why you do these things. The challenges of playing these matches after long days, that’s when you mentally really check in with them and you see who is going to step up and who is going to compete and execute in those moments.

May 18  Depart for Rovinj/Pula/Umag, Croatia