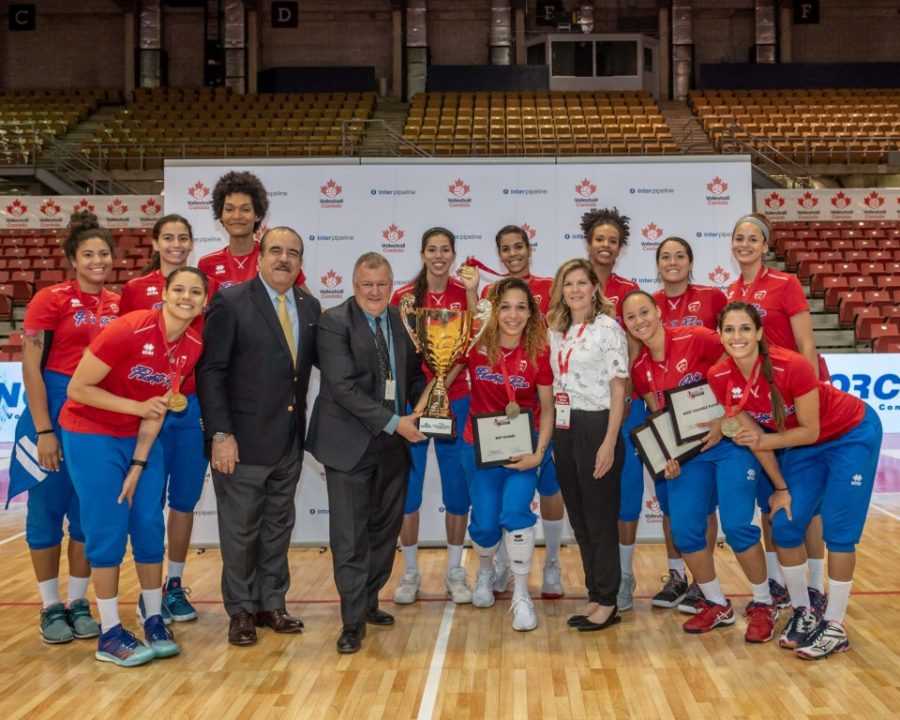 Puerto Rico took down Canada for the gold while Cuba won bronze at the Challenge Cup. Archive Photo via NORCECA

The final day of the 2018 NORCECA Women’s Challenge Cup took place and an exquisite match between Puerto Rico and host-nation Canada ended the event in what was previously a tournament of sweeps. Not only did it buck that trend, but the match went as far as it could in reaching a fifth set, before the Puerto Rican side came out victorious. The result is that Puerto Rico gets the gold with Canada earning the silver, and most importantly for the winning nation is a spot in the FIVB Volleyball Women’s Challenger Cup – a tournament that will provide Puerto Rico with a crack at making the 2019 Volleyball Nations League.

Meanwhile, rounding out the rest of the finishers was Cuba, Trinidad & Tobago and Nicaragua (from third to fifth). That comes to fruition after Cuba continued the trend of sweeps – making every match a sweep besides the championship game – by downing Trinidad & Tobago.

Puerto Rico came into the event as the highest ranked team with Canada second. Sure enough the two met for gold with Canada having the home-court advantage. That wasn’t enough to push the Maples over the edge though, as Puerto Rico ran through in the decisive fifth set.

Former Minnesota star Daly Santana had been strong throughout the tournament, but none of her previous two outings compared to this one. She went on to total 27 kills and 30 points on the night – both match-highs. The combination of Santana on the left pin and Shirley Ferrer (17 points) on the right side ended up dooming Canada, despite 18 points from Alexa Lea Gray.

Beyond the medals awarded (gold to Puerto Rico and silver to Canada), Puerto Rico now qualifies for the FIVB Volleyball Women’s Challenger Cup – an opportunity to win another tournament and earn a berth in the 2019 Volleyball Nations League.

Javier Gaspar, Head Coach of Puerto Rico: “We knew it was going to be very tough. Canada is a good and an extremely well-coached team, and I knew they would have a plan to try and stop our offense. In the first game we made 12 errors, we missed too many serves and they kept us off balance a little bit with the things that they were doing. Then the next couple set we found our rhythm. I think Daly (Santana) was huge for us. The fourth game we had them where we wanted them, but we had chances and we didn’t execute. Hats off to them because they did an excellent job in key situations.

Kyla Richey, Captain of Team Canada:  “This was definitely not what we wanted – it is good that we fought back and pushed them to a fifth set, but then on the other hand we needed to start off better than we did.  Puerto Rico plays a really solid blocking defense and we couldn’t execute our game plan at the beginning and got a bit scrambled and they were able to get momentum that way.  We have really good skill sets, but we need to read situations better.  We can execute good things in practice, but we need to translate that into a game if we want to have success.”

Cuba was the clear stronger nation in the bronze medal match, taking down Trinidad & Tobago without allowing their opponent to reach the 20-point plateau. The sweep gives them a victory to end the tournament and a bronze to pair with it.

That came with a more balanced approach with four players at seven or more kills and four more between one and three. Compare that to Trinidad & Tobago, who had the match-leader in kills in Darlene Ramdin (15 kills, 16 points) and 10 more from Channon Thompson (12 points), but just six from everyone else combined. Leading the way for the Cubans was Regla Gracia Gonzalez (11 kills, 13 points), Diaris Perez Ramos (10 kills, 12 points) and Sulian Matienzo Linares (seven kills, four aces, 11 points).

The win doesn’t do much for Cuba, the 2016 Pan American Cup champions, in terms of qualification for what is ahead. It is a nice finish to the event though and could potentially have a positive effect on their world ranking at some point. It’s also another medal for the individuals and team in an official organized tournament at the national level.

Wilfredo Robinson Pupo, Head Coach of Cuba: “Our players looked really strong. Our offense was stronger, and our setting was stronger as well. We also had the opportunity to include all our players this time to the match; so that they can all play. Winning a medal is always positive, but we had more ambition today.  We expected to be in the final against either Canada or Puerto Rico, and so we are not completely satisfied.”

Francisco Cruz, head coach of Trinidad & Tobago:  “It went very bad. The players weren’t doing what I was indicating. Maybe they had too much pressure on them today. I can not explain, I will need to analyze because there is not a relationship between this game and other games we have had. Other teams had a higher level and the Cubans don’t have that level, so maybe it was just the name. I am not happy with the result.”