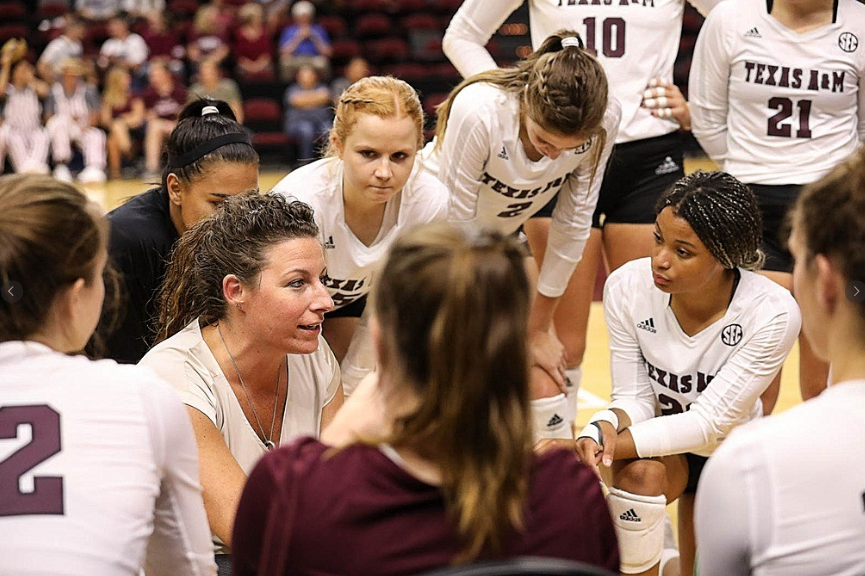 Texas A&M (12-8, 5-3 SEC) wraps up the first half of the Southeastern Conference schedule on Sunday as the Aggies play host to Kentucky (13-4, 7-0 SEC) at Reed Arena Current Photo via Texas A&M Athletics

COLLEGE STATION, Texas — Texas A&M (12-8, 5-3 SEC) wraps up the first half of the Southeastern Conference schedule on Sunday as the Aggies play host to 15th-ranked Kentucky (13-4, 7-0 SEC) at Reed Arena. First serve is at 2 p.m., and the match will be streamed on SEC Network+ with Casey Richardson and Chelsea Reber calling the action.

The match will showcase the two top point-producing players in the league in A&M’s Hollann Hans, the two-time reigning SEC Offensive Player of the Week who leads the conference in points and aces per set in league play, and Kentucky’s Leah Edmonds, who leads the SEC in kills per set and is second in points average in conference contests. The match also will feature two of the top setters in the league in A&M’s lefty Camille Conner and the Wildcats’ Madison Lilley.

·         Take a Kid to the Game: Four kids admitted free with the purchase of one adult ticket (Available in-person on game day only. Not available in advance);

·         Sunday Selfies: Fans are invited to the court to get selfies with team members.

·         Avery Skinner had 12 kills to lead Kentucky, which outhit A&M, .393 to .116 for the match. Kaz Brown had six block assists for the Wildcats to lead them to a 7-4 lead in team blocks. Senior outside hitter Kiara McGee finished with a team-high 12 points while hitting .304 for A&M. Then-freshman setter Camille Conner had 20 assists, libero Amy Nettles had a team-high seven digs, and middle blocker Morgan Davis led the team in blocks with three.

·         A&M’s most recent victory over Kentucky was Nov. 18, 2015, when the Aggies upset the 19th-ranked Wildcats, 3-0 (25-23, 25-19, 26-24) at Reed Arena. It remains A&M’s only three-set sweep against the Wildcats since joining the SEC, and it also completed A&M’s only home-and-home season series sweep against Kentucky. The victory was the 11th win in a 14-match winning streak the Aggies would ride to close out the SEC season and capture the SEC Championship, A&M’s first and only conference title in program history.

·         Texas A&M junior outside hitter Hollann Hans was named to the nine-member 2018 Preseason All-SEC Team, as voted on by the league’s head coaches.

·         All five of A&M’s SEC wins this season have been against teams that were predicted to finish above the Aggies, according to the preseason poll. A&M has two 3-2 victories against Georgia as well as a 3-2 win at LSU. Both of those teams tied for fourth in the preseason poll. The Aggies swept both Auburn and Arkansas, who were picked to finish sixth and seventh, respectively.

·         A&M’s best season in the SEC was 2015, when the Aggies, despite dropping their conference season opener to Arkansas, went 16-2 to capture the SEC title, A&M’s first conference championship in program history.

·         In their inaugural SEC season opener, the Aggies defeated Ole Miss on Sept. 14, 2012, at Reed Arena, marking Texas A&M’s first SEC victory in any sport. The Aggies went on to finish 16-4, winning the SEC Western Division and placing second overall.

·         Kentucky was picked to win the SEC, according to a preseason poll of the league’s head coaches.

·         Kentucky outhit LSU, .327 to .090, in the sweep at Baton Rouge on Friday. It was the ninth consecutive match the Wildcats have held their opponent to a .199 or lower hitting efficiency.

·         Sophomore setter Madison Lilley is the reigning SEC Setter of the Week.

·         Senior middle blocker Brooke Morgan entered the weekend ranked second in the nation in hitting percentage and leads the SEC with a .433 hitting efficiency in all matches.

·         Junior outside hitter Leah Edmond leads the SEC with 4.75 kills per set in league play and is second behind A&M’s Hollann Hans with 5.25 points per set.

·         Former three-time SEC Libero of the Year Ashley Dusek graduated from Kentucky in May and now serves as the volunteer assistant coach for the Aggies.